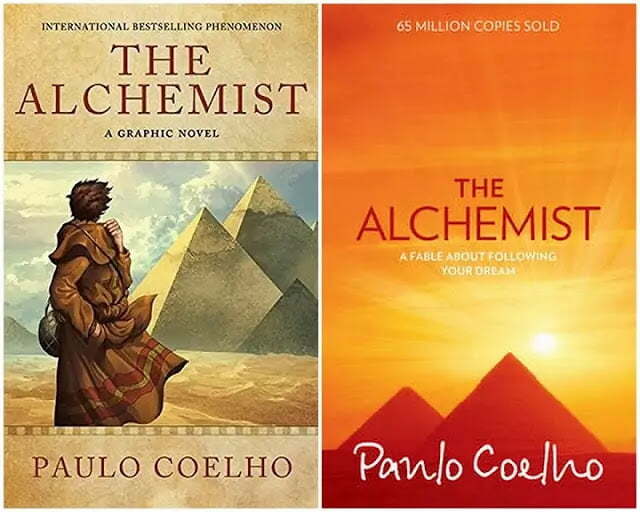 The Alchemist by Paulo Coelho

A global phenomenon, The Alchemist , a graphic novel has been read and loved by over 80 million readers, topping bestseller lists in 74 countries worldwide. Now this magical fable is beautifully repackaged in an edition that lovers of Paulo Coelho will want to treasure forever.

Dreams, symbols, signs, and adventure follow the reader like echoes of ancient wise voices in “The Alchemist“, a novel that combines an atmosphere of Medieval mysticism with the song of the desert. With this symbolic masterpiece Coelho states that we should not avoid our destinies, and urges people to follow their dreams, because to find our “Personal Myth” and our mission on Earth is the way to find “God”, meaning happiness, fulfillment, and the ultimate purpose of creation.

The novel tells the tale of Santiago, a boy who has a dream and the courage to follow it. After listening to “the signs” the boy ventures in his personal, Ulysses-like journey of exploration and self-discovery, symbolically searching for a hidden treasure located near the pyramids in Egypt.

When he decides to go, his father’s only advice is “Travel the world until you see that our castle is the greatest, and our women the most beautiful”. In his journey, Santiago sees the greatness of the world, and meets all kinds of exciting people like kings and alchemists. However, by the end of the novel, he discovers that “treasure lies where your heart belongs”, and that the treasure was the journey itself, the discoveries he made, and the wisdom he acquired.

“The Alchemist“, is an exciting novel that bursts with optimism; it is the kind of novel that tells you that everything is possible as long as you really want it to happen. That may sound like an oversimplified version of new-age philosophy and mysticism, but as Coelho states “simple things are the most valuable and only wise people appreciate them”.

As the alchemist himself says, when he appears to Santiago in the form of an old king “when you really want something to happen, the whole universe conspires so that your wish comes true”. This is the core of the novel’s philosophy and a motif that echoes behind Coelho’s writing all through “The Alchemist“. And isn’t it true that the whole of humankind desperately wants to believe the old king when he says that the greatest lie in the world is that at some point we lose the ability to control our lives, and become the pawns of fate. Perhaps this is the secret of Coelho’s success: that he tells people what they want to hear, or rather that he tells them that what they wish for but never thought possible could even be probable.

Coelho also suggests that those who do not have the courage to follow their “Personal Myth”, are doomed to a life of emptiness, misery, and unfulfillment. Fear of failure seems to be the greatest obstacle to happiness. As the old crystal-seller tragically confesses: “I am afraid that great disappointment awaits me, and so I prefer to dream”. This is where Coelho really captures the drama of man, who sacrifices fulfillment to conformity, who knows he can achieve greatness but denies to do so, and ends up living a life of void.

Consequently, is Coelho suggesting that the alchemist found God while searching for the elixir of life and the philosopher’s stone? What is certain is that the symbolism of the text is a parallel to the symbolism and the symbolic language of alchemism, and similarly the symbolism of dreams is presented as “God’s language”.

It is also symbolic that Santiago finds his soul-mate, and the secrets of wisdom in the wilderness of the desert. The “wilderness” is a symbol that has been used by many great writers e.g.. Austen in “Mansfield Park“, and Shakespeare in “King Lear“. In the desert, Santiago meets his “twin-soul” and discovers that love is the core of existence and creation. As Coelho explains, when we love, we always try to improve ourselves, and that’s when everything is possible. The subject of love inspires a beautiful lyricism in Coelho’s writing:

“I love you because the whole universe conspired for me to come close to you.”

“The Alchemist” is a novel that may appeal to everybody, because we can all identify with Santiago: all of us have dreams, and are dying for somebody to tell us that they may come true. The novel skillfully combines words of wisdom, philosophy, and simplicity of meaning and language, which makes it particularly readable and accounts for its bestselling status.

Everyone who is such a seeker should read this optimistic book of one who seems to have succeeded in the process of turning a potentially base life into a golden achievement, a true alchemist’s conversion.

At the onset of the Alchemist, we meet Santiago – a simple shepherd who lives in Andalusia, a small village in Spain. He has no big desires in life – all he wants is to be free to roam with his sheep, little wine and a book in his bag. Soon things change… he gets a repeated dream of a great treasure, hidden under the Egyptian Pyramids. One day, he meets Melchizedek – king of a distant land, who encourages Santiago to chase his dream and treasure. Santiago also sells his sheep and sets off journey towards the desert.

But unfortunately, on the very first day in the new country, a clever thief robs Santiago. Broken Santiago finds a job with a crystal merchant – just to get some money to go back to his home. But soon he learns all the tricks and makes the merchant’s business successful.

Days run, at one-point Santiago realizes that he’s just getting comfortable with things as they are, instead of pursuing his personal legend. That strives Santiago to restart his journey, he joins a caravan which travels across the desert. He meets an English man on the caravan,  who’s looking for the 200-year-old alchemist. That English man is an avid-reader who tells Santiago that the alchemist lives in the nearby oasis.

The caravan stops near an Oasis since there’s a tribal war on the way. There, he finds Fatima – a girl from the deserts. They fell in love with each other and starts living together near the oasis. One day, Santiago envisions an attack on the Oasis and save all the people and animals over there. His inception to predict the future makes him popular across the desert, that the alchemist himself pays a visit to Santiago. The alchemist promises to guide Santiago towards the treasure. Fatima too encourages Santiago to chase his dream.

The very next day, Santiago resumes his journey with the alchemist towards the treasure pyramids, but both are captured by some refugees on the way. At the climax, with his strong confidence and magical powers, Santiago speaks to Sun and Wind – to bring the rain. Frustrated refugees beat up Santiago, but one of them reveals that the treasure is not in here in the pyramids, but they’re there at “Andalusia” – the small village in Spain from where Santiago’s all the journey began

The story ends as Santiago discovers the treasure, right at a tree in Andalusia – where he’d his first dream. With all the fortunes, Santiago goes back to the deserts to meet his love, Fatima.

Top 5 Lessons in The Alchemist

The book is full of lessons and pieces of inspiration spread all through the story. Perhaps, I need a full post to list all of them. Here are some of the 5 important takeaways in my view:

Not all of us can find Santiago within us; we all have dreams, but not everyone is ready to quit the contented life and start chasing dreams, and that’s what makes the Alchemist story enchanting.