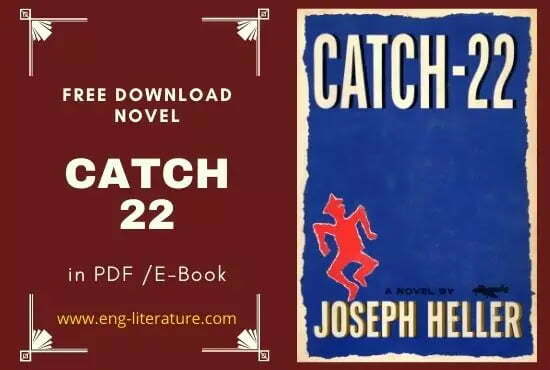 One of the most significant works of protest literature written in the 20th century is Joseph Heller’s Catch- 22 which has given an expression to the world cutting across all climes and culture. Catch 22 has been described variously as a war novel, a protest novel and most importantly, a surreal novel.

The entire novel revolves round Yossarian’s story and personal experiences. This is the reason the majority of the story’s episodes are refracted through his own perspective. Yossarian sees the entire battle in an individual manner. He isn’t influenced in any capacity by such a public ideal or dynamic standard. He is furious that his life is continually being placed in peril when he hasn’t done anything wrong. He has a keen desire to live and shows his determination to somehow be immortal or die trying to be so.

It’s one of the novel’s amazing achievements that it may be the darkest, most profoundly negative vision of existence in modern fiction, yet it leaves you with a feeling of mad love for its crazy beauty.

Behind the backdrop of World War II, the novel took place. Captain Yossarian, an American bombardier stationed on the Italian coast of Pianosa, with his Air Force squadron. Yossarian and his friends have an absurd existence that seems out of a nightmare. Their lives are defined by violence and bureaucracy. They aren’t seen as fully human but rather resources by their ruthlessly ambitious superior officers. The squadron is pushed thoughtlessly into violent combat situations and bombing expeditions in which it is seen of more importance to the squadron to get high-quality aerial photographs of explosions than to actually hit their targets. The colonels continue to increase the number of missions that the men need to fly before they will be sent home.

Catch-22 is a law that is depicted in a number of different ways in this novel. We see that Yossarian finds out that it could be possible for him to be discharged from military service by reason of insanity. Paranoid and odd, Yossarian accepts that everybody around him is attempting to kill him. All Yossarian needs is to finished his deployment and be sent home. However, because the glory-seeking Colonel Cathcart continually raises the amount of required missions, the lads of the “fighting 256th squadron” must keep on fighting.

With a growing hatred of flying, Yossarian pleads with Doc Daneeka to ground him on the plea of insanity. Doc Daneeka replies that Yossarian’s appeal is baseless because, as per army regulation Catch-22, insane men who ask to be grounded prove themselves sane through a priority for private safety. Genuinely insane individuals are the individuals who promptly consent to fly more missions. The best way to be grounded is to request it. Yet this act demonstrates sanity and thus demands further flying. Crazy or not, Yossarian is stuck.

The mad bombardier utilizes elective measures to keep away from battle flights. Faking a liver condition, Yossarian checks into the medical clinic and takes a break by controlling mail and fashioning “Washington Irving” to authentic armed force correspondence. Yossarian puts off the mission to Bologna when he subtly moves the bomb line on the map of Italy. A sudden outbreak of diarrhea caused by poisoned sweet potatoes also delays the mission, much to the chagrin of Milo, the mess officer and entrepreneur liable for a posh international trade syndicate during which everyone features a share.

Starved Joe has flown more battle deployments than anybody. Orders shipping him home are constantly unfulfilled and therefore the ragged hero has frequent screaming nightmares. Yossarian is accused for the loss of Kraft’s plane over Ferrara since he flew over the objective twice. Colonel Cathcart and Colonel Korn conceal the calamity by granting Yossarian an award for fortitude and elevating him to skipper. Yossarian stands bare in development to get his decoration. Still damaged by Snowden’s demise over Avignon, Yossarian won’t wear his violence splashed uniform. Youthful Nately crashes in a crisis mission and Yossarian bears the updates on his passing to his dearest prostitute in Rome. Grief stricken and angry, she follows Yossarian with bestial anger and attempts to kill him with a kitchen blade.

Yossarian defiantly refuses to fly more missions. Colonel Cathcart offers Yossarian an arrangement: Yossarian will be sent home if he gives commitment to praise his commanding officer. Understanding that such a deal would deceive his fellow soldier, Yossarian denied to sell-out.

The chaplain gives Yossarian the exciting news that his previous tent-mate, Orr, has washed ashore in Sweden after missing in the sea for few days. Yossarian understands that Orr was not the botching pilot that he claimed to be. Rather, Orr shrewdly practiced his escape with each planned crash landing. Out of much excitement, Yossarian chooses to flee and join Orr in Sweden. Yossarian finds that there is nothing of the sort as Catch-22. Notwithstanding, it doesn’t make a difference, since individuals have confidence in it in anyway. He won’t stay and danger being slaughtered in a war that is practically finished. Yossarian flies away to Sweden, resolved to remain alive.