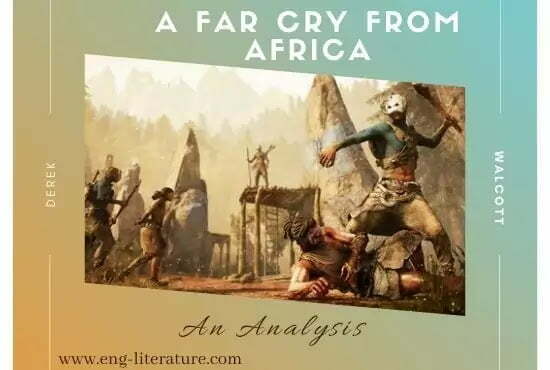 Composed just a year before Kenya got its Independence, and at the backdrop of Mau Mau Uprising, an extended and bloody battle during the1950s between European settlers (Whites) and the native Kikuyu tribe (Blacks) in what is now the republic of Kenya, Derek Walcott’s “A Far Cry from Africa“, is not only a brilliant exposition of the imbalance relationship between the colonizer and the colonized but also a portrayal of the agony of a man who remains in the middle of two societies. Though the principal aim of the poet is to uphold the revolt of the Kenyean clan against the civilized white settlers, but while doing so he finds himself in a dilemma which tears him between “Africa”, his origin and the English tongue and culture he loves.

At the onset of the poem, Walcott describes the excruciating harsh experience of the rebellion that turns upside down the tranquility and mental peace of the nation. The poet has used ample animal imagery to criticise the savage aspects of both culture. His hybrid existence provides him the scope to dismantle the evil side of both the colonizer and the colonized. The nation itself compared to an animal, as it indicates it is an animal like a lion. “tawny pelt” And how Kikuyu started the bloody battle. The Kikuyu are compared to flies who are feeding on blood. Next we are informed the aftermath of the rebellion. Walcott finally compares Africans as a primitive beast, and the British as a fictitious, yet mighty, super-hero.

In “A Far Cry from Africa,” Derek Walcott uses the advantages of hybridity to express unhomliness. Derek Walcott often described himself as a “mongrel”; both grandmothers were African and both grandfathers were European. He hated the English culture but loved the English language and empathized with the Irish for they were also the victims of colonization. While dealing with the identity of his own Walcott writes-

“I am a kind of split writer; I have one tradition inside me going in one way, and another going another.”

“A Far Cry from Africa” does not provide the poet the way to resolve the paradox of his hybrid inheritance- “How can I face such slaughter and be cool? How can I turn from Africa and live?” (lines 31-32)

Throughout the poem, Walcott continues his quests to know about the true identity of him. He, despite his love for the English language, cannot embrace the culture of the colonizer and at the same time cannot fit himself to the culture of the “darkness”, and as a result he tries to conclude the tussle within himself by blaming his state of in-betweenness-

“I who am poisoned with the blood of both, where shall I turn, divided to the vein?” (line26)

Walcott tries to uphold the fault of both cultures without showing any kind of biasness either towards Africa or towards British. For instance in the following quoted lines he blames the British for their imperialistic design to grasp the culture of the native but without creating sympathy for the colonized-

“Only the worm, colonel of carrion cries,

Waste no compassion on their separated dead’.” (Lines 5-6)

The title of the poem bears layers of meaning. At one hand the phrase “A Far Cry‟ suggests the poet’s futile attempt to write about Africa from distance for the poet himself feels the difficulty of writing about a culture from where he is literally and metaphorically far away. At the other hand “A Far Cry” may also have another meaning that the real state of the African “paradise” is a far cry from the Africa that we have read about in descriptions of gorgeous fauna and flora and interesting village customs”. A third level of meaning to the title is the idea that the poet, despite the distance, is able to hear the cry of the African natives due to their loss of their cultural identity. He hears the cry coming to him on the wind and making him feel nostalgic towards his origin.

In an article “A dilemma of Caribbean Populace: Post-Colonial conflicts and Identity crisis in Derek Walcott’s Plays” Bharatender Sheoran argues that postcolonialism deals with “doubleness” in terms of identity and culture, which, as a problematic legacy of colonialism, affects postcolonial peoples. In this diversity and hybridity, the colonized have lost their original selves. Those once colonized are multicultural people, and colonized cultures cannot be considered “pure”; rather than pure, they are heterogeneous cultures. Colonialism, even though it is said to have ended, has left its traces in the postcolonial age making the colonized cultures a mixture of Western and indigenous qualities.