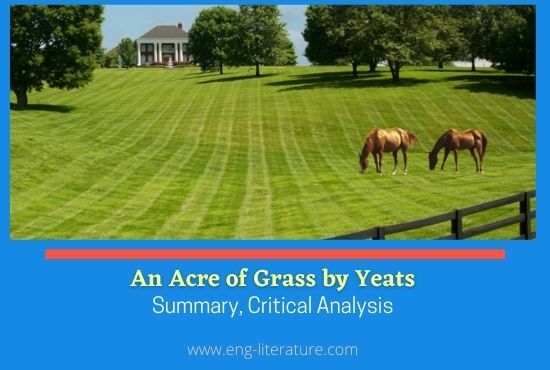 In which year the poem An Acre of Grass got published?

An Acre of Grass is taken from Yeats’s Last Poems which include poems written during 1936-1939 and published posthumously.

What is the main theme of An Acre of Grass?

The poem shows all a zest and this zest is something distinct from Romantic enthusiasm, something more virile and less contaminated with self-pity. There is plenty of self in it but it takes the form not of a young man’s escapism who hankers for the wings of a dove, but of an old man’s self-confidence who thinks he has the wings of an eagle. His confession of faith is found in brief in the last two stanzas of An Acre of Grass.

Summary of “An Acre of Grass”

The poet is old. He enjoys quiet. He spends his time in reading books, drawing pictures and taking physical exercise in a small plot of grassy land. The strength of his body is gone. His life is as dark and lonely as mid-night and as decaying as an old house where only a mouse runs about.

He has had now no attraction for anything. He has come to his life’s end. He enjoys the quiet of old age, with his imagination dulled, his mind not working briskly, and his preoccupation with flesh. This old man’s rest gives him truth, but it provides no means to work that truth into poetry.

The poet wishes to renew himself, writing off his past, and he prays for the frenzy appropriate to old men. He wants to link his own life with the lives of Timon, Lear and William Blake who restlessly searched for truth, till they found it. He longs for Michael Angelo’s penetrating vision, his insight into the mystery of life and death.

Like Michael Angelo who lifted bodily form to a supernatural plane, he will, through poetic frenzy, raise from the graves the dead men forgotten by mankind (.e. reveal truth forgotten by mankind). In other words, with the help of mystical insight which comes through frenzy (poetic inspiration characteristic of Michael Angelo even in his old age, he will make truth, still undiscovered, known to man.

An Acre of Grass Analysis

An Acre of Grass is a representative poem of the last phase of Yeats’s poetic career. The poet was growing old in comfortable circumstances. His conjugal life was happy. He was well off and had achieved world-wide fame. He was acquainted with everything that an intelligentsia was expected to know. His letters to Olivia Shakespeare at this time repeatedly show that he feared that “Knowing all” he would grow nothing, that understanding would make him incapable of passionate experience of that frenzy which is the source of all poetry.

Since all his questioning was at rest he grew serene and calm more and more, and thus his poetic inspiration was about to dry, That is why we see him in his last poems praying for frenzy or madness. Indeed this frenzy or madness is the keynote of many poems of Yeats’s later phase. In A Prayer for Old Age” he writes,

“I pray–for fashion’s word is out

And prayer comes round again

That I may seem, though I die old,

In An Acre of Grass the poet wants to rejuvenate himself, giving up the rest and quiet of old age, and prays for the frenzy proper to old men,

“Grant me an old man’s frenzy

Myself must I remake.”

He longs for that frenzy-intensity akin to madness which Timon, Lear or Blake had in common even in their old age :

“Till I am Timon and Lear

Or that William Blake.”

He yearns for that mystical insight which enabled Michael Angelo to penetrate into the mystery of life and death :

That can pierce the clouds,

Or inspired by frenzy

Shake the dead in their shrouds.”

He repeated this prayer so earnestly and made such efforts to remake himself that it kept his mind active to the last days of his life, and made him, of all the poets who have written of old age, the least tranquillising and the most exhilarating,

Like his later poems, “An Acre of Grass” shows a zest which is something distinct from Romantic enthusiasm, something more virile and less contaminated with self-pity. “There is plenty of self in it, but it takes the form not of a young man’s escapism who hankers for the wings of a dove, but of an old man’s self-confidence who thinks he has the wings of an eagle.” (Louis MacNeice : The Poetry of WB Yeats) His confession of faith is found in brief in the last two verses of the poem, where he longs for the frenzy of mad old men like Timon, Lear or Blake, and Michael Angelo’s “old man’s eagle mind.”

In his last poems “Yeats places,” as Prof. B. Chatterjee says, “his own self in the processional stream of Time, and thus achieves a fusion of the particular and the general.” The same poetic method is discerned in “An Acre of Grass”. The poet is old. Nothing remains in his life but picture and old book, and a small plot of grassy land. The first two stanzas convey the sense of serenity,

“My temptation is quiet.” Suddenly there is a shift of thought which is so characteristic of the last poems. The note of serenity gives place to ecstasy in the third stanza. In his quiet old age the poet wants to remark himself and prays for the frenzy proper to old men. In his restless search for truth he wants to link his own life with the past, with the lives of Timon, Lear, Blake and Michael Angelo the heroic figures who gave a fig for old age and death. All these men had one thing in common-intensity akin to madness. Thus a fusion is achieved between the particular and the general-between the poet and the heroic figures of the past.

The poem illustrates Yeats’s subtle but unconventional use of images which is a conspicuous feature of his later poems. The images of midnight’ and old house “where nothing stirs but a mouse”, though unconventional, are very appropriate, and they amply suggest the silence, loneliness, darkness and decay of old age. ‘Rag and bone’ is also an unconventional image which suggests the poet’s preoccupation with flesh. The last two verses of the poem have a stream of images-Timon, Lear, William Blake and Michael Angelo They all stand for the frenzy appropriate to old men. ‘Clouds is the image of mystery that envelops life. The ‘eagle mind’ is a recurrent image in Yeats. It suggests the keenness of perception.

“My temptation is quiet,

Nor the mill of the mind

Consuming its rag and bone,

Can make the truth known.”