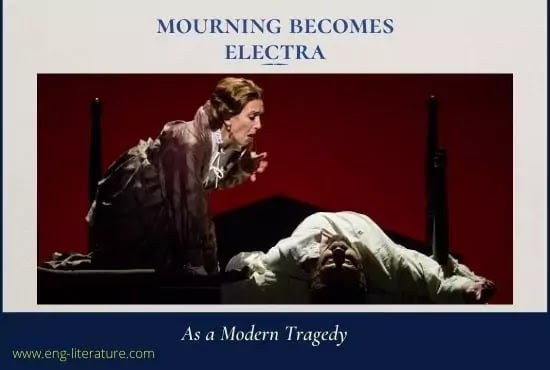 Mourning Becomes Electra is considered to be one of the most important and poignant tragedies by O’Neill. By using a Greek legend as the model of his drama, O’Neill has reared up Mourning Becomes Electra a universal tragedy of tremendous stature of paramount importance. The play has deep, dark, solid, uncompromising and grim presentation of the Greek legend in terms of American circumstances.

In Mourning Becomes Electra O’Neill seeks to equate the end of the Civil War with the downfall of Troy; Agamemnon, is recognizable as Brigadier Ezra Mannon, Clytemnestra as Mannon’s wife Christine, their son Orin as Orestes, their daughter Lavinia as Electra, and so on.

The first play deals with the story of Lavinia Mannon, who seeks to keep her father’s honour while her mother gallivants about with a sea captain and plans to murder Ezra Mannon on his return. She manages to do it, undetected by any one but Lavinia. The first part ends with Ezra Mannon’s death in his bedroom

The second part features the return of Orin from war. Lavinia tells Orin about the murder, and proves her statements when she takes him to follow Christine on a visit to the Captain’s ship. Orin shoots the sailor to avenge family honour and then goes back home with the news of the death of Adam But his mother goes quietly into the house and shoots herself, because of the extreme sense of guilt.

The third part shows Orin’s going mad with remorse for indirectly murdering his beloved mother, and also because of Lavinia’s engagement to a good-looking young swain Peter. Orin follows his mother along the suicide route and commits suicide. The ghosts of the dead rise up to confound Lavinia’s stern sense of justice, and she breaks her engagement and shut herself up forever with the evil past in the grim house of Mannon to forebear her fate.

Being a conscious artist, O’Neill was very careful in producing the sublime effect of a great tragedy. The achievement is all the more remarkable in that, as he leaned heavily on psycho-analytic notions, interpreting the story in terms of a father-fixation for Lavinia, and Oedipus complex for Orin. The play could have been a mechanical transference of the Greek plot to modern times; it could have been a mere family case-history from an analyst’s note-book. But remarkably, it achieves the tragic effect as a few modern plays have done.

One of the modern critics Schopenhauer declares that in “Mourning Becomes Electra” we find the true sense of tragedy that “it is not his own individual sins, i.e. the crime of existence itself”. The pessimism of the Greeks may have been equally black, their tragedies just as aware of the crime of existence.

The unfulfilment, exhaustion, and apathy which are significant possessions of O’Neill’s tragedy are effectively manipulated in the play. The Greeks were never as contemptuous of life as to seek consolation in death, nor as afraid of death as to calm did their fears by promising themselves, have the fulfilment after death of all that they vainly yearned for in life.

Indeed, O’Neill’s play bears out the statement by achieving precisely the opposite result: Electra offers a solution not to the problem of existence but to that of non-existence; it reconciles not to life, but to death.

In Mourning Becomes Electra, Neill convinces, that human beings are great and terrible creatures when they are in the grip of great passions, and that the spectacle of them is not only absorbing but also and at once horrible and cleansing.

Catharsis is a condition, which O’Neill seldom achieved, preferring, as he did, narcosis or necrosis. That the deficiencies of “Mourning Becomes Electra”, when it is compared “with the very greatest works of dramatic literature” are limited only to its language is an opinion, which, if our judgments have been even moderately sound, has little to be said in its support.

Krutch says that in this play O’Neill achieved tragic grandeur in the style of Oedipus, Hamlet and Macbeth. Kruch concludes that

“O’Neill is almost alone among modern dramatic writers in possessing what appears to be an instinctive perception of what a modern tragedy would have to be.”

But in the words of Barrett H. Dark, “O’Neill’s trilogy is a tearless tragedy, remote, detached, artfully shaped, cunning devised skillfully related and magnificently conceived. Yet in spite of its Greek prototype, its mood is Gothic rather Greek.”

“It is a fine melodrama: it quite tragedy.”

We conclude this discussion with these words play achieves a genuinely tragic effect. And without suggesting any weighing of the balance between Aeschylus and O’Neil, it must at least be said that “Mourning Becomes Electra” was astonishingly powerful in the theater.

However, though the play acquires certain loftiness from its Greek overtones, yet the play falls short of a great tragedy. O’Neill does not live up to the tradition of tragedy. The great tragic writers of the past were never nihilistic, but O’Neill’s play has a nihilistic outlook.