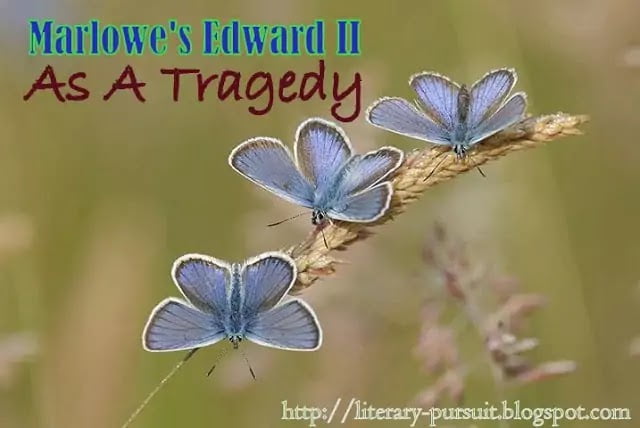 Edward II as a Tragedy

The tragedies of Marlowe are known for their grand design, extravagance grandeur, ‘rant and bluster’, the monomaniac characters with their single obsession of power, the passion for their boosting up of self in a way that we marvel at them, and a certain ruthlessness which defies human sentiment. His last celebrated tragedy Edward II is concerned with the tragic fall of a historical king, Edward II.

Aristotle in his Poetics defines tragedy as “an imitation of an action that is serious and complete and of certain magnitude… not of narrative through pity and fear affecting the proper purgation of these effects.” Marlowe’s Edward II surely abides by certain points of Aristotelian definition of tragedy.

As per as technical excellence is concerned, Marlowe’s Edward II does not appeal as Shakespeare’s tragedies do. Whereas Shakespeare’s tragedies deal with lofty universal ideal, Marlowe’s Edward II is all about frustration and weakness. The dictum “Character is destiny” is absolutely applicable to the tragedy of Edward II. Shakespeare’s tragic heroes are great men not only in the sense that they are kings and generals, but because they gain a great moral character in spite of having hamartia (characteristic flaw). Hamlet is a man of lofty ideals; Macbeth and Othello are men of outstanding qualities; King Lear has the nobility of soul. Accordingly they evoke pity and fear. Marlowe’s Edward II is a king of different nature.  He is not only a fool but a coward.

It is the character of Edward II that has marred the play being a great tragedy. He does not at all impress us as a true tragic figure. He suffers because of his fond infatuation for his ‘minion’ Gaveston. There is hardly any redeeming feature in his character. He insults his Lords, humiliates the Bishop and insults his wife, Queen Isabella. He is utterly weak and irresolute. Shakespeare’s Hamlet is also irresolute which is born of high philosophy. Excessive thinking paralyses his will to act. But Edward II is not capable of thinking at all. Shakespeare’s Richard II is weak and insufficient like Edward II. Still he has fineness of temperament, a beauty in his nature which makes his fate not only piteous but tragic. But King Edward hardly possesses any greatness.

The great tragedies of Shakespeare involve a moral conception, a dramatic conflict between good and evil from which goodness ultimately wins. In Edward II, there is a real dramatic conflict between the king and his favourites on the one side and his rebel Lords on the other. This conflict continues till the end of the play with varying vicissitude. At one stage, the King is able to defeat his rebel Lords. But in the end he is defeated and finally executed by the treachery of his own disloyal Queen. Neither in Tamburlaine nor in Dr. Faustus there is any conflict between the two forces.

The success of Edward II as a tragedy rests immensely on Marlowe’s handling of the plot, rather than the effective structural design of the play to achieve his cathartic effect. The play has a well-designed plot. It is truly a great tragedy based on history, “With history well-preserved and history well-dramatised.”

Edward II is most remarkable for its two famous Scenes: The Abdication (Deposition) Scene and the Murder (Death) Scene. In writing about the Abdication Scene Charles Lamb commented “The reluctant pangs of abdicating Royalty furnished hints which Shakespeare scarce improved in his Richard II.” On the Murder Scene he remarked “It moves pity and terror beyond any scene ancient and modern; with which I am acquainted.” Indeed these two scenes perfectly bring out the catastrophe of the play.

After judging all the merits and demerits of Edward II as a tragedy, we may say that it is one of the finest specimens in whole range of English literature. Lets conclude in the voice of Charlton

“Greatly inferior in structure and corrupted by vulgar interpolations as it is that play has wider human significance and contains the sublimest of Marlowe’s writing.”