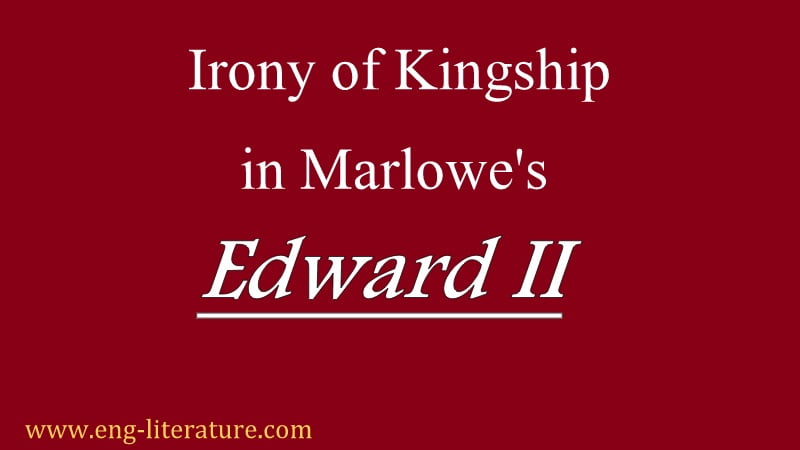 Irony of Kingship in Edward II

Christopher Marlowe’s Edward II is a superb specimen of historical tragedy of a historical king. Here the hero is King Edward II whose tragic downfall is due to his own characteristic weakness and setbacks. His thoughtless, unwise, impulsive, monomaniac approach to the world around him, his wrong dealing with barons and lords and even his own wife and his total lack of wisdom and capability to rule, result in his tragic fall and inhuman suffering.

To be a king is definitely a matter of glory and honour and there are many to aspire for the crown, though there are a few to get it and a very few to wield it with wisdom and caution. History presents a good many kings who believed in the theory of the divine right of the kingship and ruled despotically, but very often they are found to have their own lessons, like Charles I, the Stuart King of England. Marlowe’s all four tragedies – Edward II, Tamburlaine, Dr. Faustus, The Jew of Malta bring out the universal truth that all mighty men (kings of their own kingdoms) suffer their tragic fall in their life.

A good ruler is supposed to lead his country and keep his kingdom united but Edward II prefers to waste time and enjoy himself with his flatterers. Edward II is introduced to the audience as a ‘pliant king’, a pleasure seeker who prefers to divide his kingdom than have his lover Gaveston exiled from the kingdom. Later in the play, his orders are disregarded by the nobles and a civil war within the kingdom of England ensues. By the end of the play we see the king at his most tragic, having lost everything including his friends, his lover Gaveston, his kingdom and having been betrayed by his own wife, Isabella.

The play Edward II reaches its emotional climax in Act V, Scene I. The temporary bliss of wearing the crown makes him refuse to surrender it and he again breaks in hysterical anger, which is now impotent. When Leicester reminds him of the fact that if he refuses to put down the crown, the prince may lose his right, he immediate surrenders his crown. After that he finds it useless to remain alive and comes fully under the operation of death instinct. In a final gesture of his love for the queen, he sends a handkerchief to her. But this does not sound as tragic as his last words to his son:

“Commend me to my son, and bid him rule better than I…”

The king rises above the ordinary level when he expresses his understanding of the tragic situation of a king remaining in imprisonment in his own kingdom and still remaining the titular head of the kingdom. This kind of situation forces him to understand the tragedy of power or the irony of kingship:

“I wear the crown, but am controlled by them
By Mortimer, and my unconstant queen…”

Though it is rather ironical that he expects constancy from the queen whom he disregarded as long as he had Gaveston by his side, the audience tends to forget that and sympathise with him in his plight. They may fall under the influence of the king’s emotional condemnation of the queen, who “spot my nuptial bed with infamy.” In the next moment, however, he breaks in cold sarcasm when he asks the Bishop of Winchester whether he must resign to “make usurping Mortimer a king”. It is clear now that his mind is being frequented by a variety of moods.

For the king the situation is more pathetic as he cares now for his son, who, according to him, is “a lamb encompassed by wolves”. In utter helplessness and frustration he bursts out in cursing Mortimer. But soon recovers sanity and comments on the tragedy of his situation:

Then again he breaks out in grim sarcasm while taking off his crown: “…take my crown—the life of Edward too”. At the next moment, however, he places himself on the flowing stream of time and expresses the Marlovian dilemma in his understanding of the impersonal operation of time:

“Continue ever, thou celestial sun
That Edward may be still fair England’s king”

These lines are highly reminiscent of those of Doctor Faustus at the final catastrophic moment:

“Stand still you may ever moving spheres of heaven
That time may cease, and midnight never come”

Such is the lot of King Edward II. The irony of his kingship lies herein. He always thinks of power and glory but never try to achieve those. The glaring reality of the irony of Kingship comes out in Edward’s own admission:

“But, what are kings, when regiment is gone.”