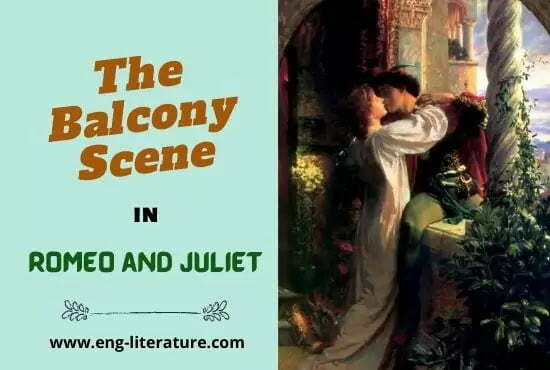 Describe the Balcony Scene in Romeo and Juliet

Romeo and Juliet meet in the Capulet feast and at first sight fall in love with each other. They are now desperately in love with each other. After the feast is over Romeo finds his way to the garden of his enemy. By the instinct of love he reaches the spot overlooked by Juliet’s chamber. At the window stands the maiden in converse with herself upon the events of the evening. Unaware of the presence of any person, she pours forth her heart’s confession.

It is second scene of the second act. It is called Balcony Scene because Juliet appears on a small balcony outside her bed room window. Romeo is standing below in the garden. She shares with Romeo one of the greatest love passages in the English language. Juliet appears on the balcony. Romeo is dazzled at her beauty and speaks pure poetry in her praise. Juliet is unaware of the presence of Romeo. She confesses to herself her love for him which is above family feud. “What’s in a name?” she asks.

At this, Romeo speaks directly to her and declares that he is ready to abandon his name to win her love. Juliet is startled by Romeo’s voice and fears for his safety there. Romeo claims fulfillment of those vows which in her innocent outpouring Juliet had bound herself. Juliet tells him that her love for him is true. She is too nobly sincere to draw back the confession of her love. She says that he should not impute her readiness to forwardness or lightness. She protests that she will prove truer than those that have more conning to be strange. The playful tone soon deepens into that of passionate, unmeasured self-surrender:

My bounty is as boundless as the sea :

The more I have, for both are infinite.

But the presage of woe to come overshadows the scene :

Although I joy in thee,

I have no joy of this contract to-night :

It is too rash, too unadvised, too sudden.

Too like the lightning, which doth cease to be

Ere one can say it lightens.

Yet, in spite of the forebodings, Juliet knows that there is only one way now by which she and her lover can be united. With quiet resolution she determines to take this way. She tells him that if his love be true, he should make the arrangements for a secret wedding, and send her word, by a messenger who will come from her, of the time and place of the ceremony. She declares she will come to him, and be his for evermore.

See simplicity and directness of Juliet’s bearing in this scene have often been contrasted with the more brooding emotion of Romeo.

Mr. H. A. Mason, in his book Shakespeare’s Tragedies of Love has attached great importance to the Balcony Scene. As a pattern of the idea of tragedy Romeo and Juliet is not a success. And yet the play is a success. Wherein, then, consists the success of the play? What is the main thing in the play? The play contains some scenes that, once seen, can never be forgotten and retain their hold when the play becomes thoroughly familiar. Such scenes make the strongest impression. If we nominate the balcony scene as one of those scenes, we can count on almost universal support. What makes this scene so important?

Features of the Balcony Scene

1. The first feature of this scene is the wonderful night. It checks the impulse of our emotion without our knowing it. There is pure passion. There is something unearthly, and yet of the earth. There is spiritual plane which corresponds with the smell of the ground at night while we gaze up at the stars.

2. There is in this scene predominance of the sacred. It has the magic. It exercises the lulling power over the moral censor in each of us. The spectator is clear-eyed about the issues of right and wrong. Juliet is doing something that ranges from the naughty through the improper to the downright immoral. But the spectator becomes aware that his moral operation is suspended by something sacred in Juliet’s soliloquy. Romeo casts an aura round Juliet’s purity, and prepares us to accept the word ‘sacred’ for what is going on. The opening wonder with its suggestion of the supernatural is trumped by the greater wonder of Juliet’s naturalness.

3. The point of the scene lies in the sacredness of promise. Juliet says

What makes the scene strong is the finality and completeness of the trust. It is a scene of plighting rather than love. The emphasis is all on faithfulness and on preserving the sanctity of what was originally a private vow. It is not an Italian Jove scene: it is the winning of serenity not of tumult. The scene works steadily towards its close in

“Sleep dwell upon thine eyes, peace in thy breast.”

This putting back of natural excitement gives a richness and potency to the scene.

“This bud of love by Summer’s ripening breath

May prove a beauteous flower when next we meet.”