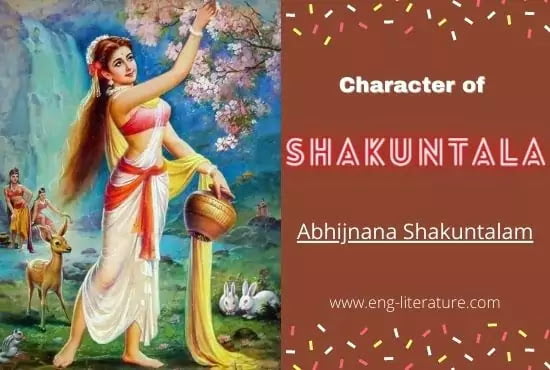 The play Abhigyan Shakuntalam by Kalidasa is one of the best plays in ancient Sanskrit literature. The play is about a beautiful damsel Shakuntala who lives in the hermitage of the sage Kanva. She has been the daughter of sage Vishwamitra and ‘Apsara’ Menaka.

In Abhijnana Sakuntalam, Kalidasa presents Shakuntala as an embodiment of beauty, feminine charm and womanhood. Kalidasa has presented her in the mould of the ideal heroine of Sanskrit literature as laid down in the texts of Sanskrit dramaturgy. Shakuntala has been presented as an ideal woman like Savitri, and Sita. In such a romantic design, the main aim of the dramatist is to evoke the Sringara Rasa. Shakuntala possesses ideal beauty and grace. Unlike other heroines such as Urvashi and Malvika, Shakuntala is a child of Nature. She has been brought up in the lap of Nature and is more close to earthly reality. Shakuntala is a unique creation of Kalidasa who transcends the erotic. Nature also plays an important role in her life.

King Dushyanta, the king of Hastinapur happens to be in the forest on hunting and enters the hermitage. He removes his royal regalia and encounters Shakuntala who is accompanied by her two companions. The king at once falls in love with her and she too cannot resist. The king requests her for the ‘gandharva’ form of marriage and she agrees on the condition that her son would be the king of Hastinapur.

The play focuses on the tension between desire and duty, ‘Sringra rasa’ and ‘Vira rasa.’ Dushyanta’s chase of a deer can be interpreted symbolically as: the parallels between Shakuntala and the deer are frequent: they symbolize the serenity of the asrama, are innocent and given to tenderness, and are also physically close, for the deer the king is hunting is a fawn nurtured by Shakuntala. This seems to hunt at the predator being the king and Shakuntala being the prey.

👉Irony in Abhigyan Shakuntalam by Kalidasa

After the ‘gandharva’ form of marriage, the king leaves the hermitage. He has promised Shakuntala to send his men to take her to the capital with due honour. All this happens in the absence of the sage Kanva who has been out. When Kanva comes to know about this, he approves of this marriage.

Shakuntala is simple, innocent and easily gullible. She has so far not faced such a situation where the outburst of passions can sway the person. She had not learned how to restrain herself, how to hide her feelings. Shakuntala had not known cupid before; hence her heart was bare of armour, and she could not distrust either the sentiment of love or the character of the lover.

The character of Shakuntala has been the pivotal point around which the play revolves. She emerges as the embodiment of Indian womanhood who is ready to make sacrifice when society (Dushyanta) turns indifferent and hostile too.

In the beginning of the play, Shakuntala is seen in the sylvan surroundings of the hermitage. She possesses unimpaired innate chastity. Often she has been compared with the innocence of the world of flora and fauna. The objects of comparison are the deer, the jasmine flower and the mountain spring. Rabindra Nath Tagore observes :

The flower of the forest needs no servant to brush the dust of her petals. She stands bare; dust settles on her, but in spite of it she easily retains her own beautiful cleanliness. Dust did settle on Shakuntala, but she was not even conscious of it. Like the simple wild deer, like the mountain spring, she stood forth pure in spite of mud.

This shows the first phase of the development of her personality in the Wordsworthian sense. She has enjoyed the uncorrupted and pure life of Nature as its child. When Shakuntala is born and abandoned by Apsara Menaka, she is looked after by ‘Sakunta’ birds.

Fairy-tale elements are present in the poem as well as the play. The sacred pool of golden lotuses guarded by a Genius with specific instruments to follow, the failure to carry them out, the curse and consequent loss of love, status and superhuman powers are characterized of folk lore.

When we study the structural aspects of the play, it becomes evident that apart from the curse motif and the restoration motif, there is present

“a pattern of dream illusion and of forgetfulness-recollection-recognition, all of which are intricately interwoven.”

Shakuntala’s kinship with Nature is evident from her name itself. After her birth, she was protected by ‘Shakunta’ birds (peacocks). Shakuntala establishes human relations with the object of Nature. When she departs from the hermitage, every object of Nature seems to be mourning. Shakuntala is a wonderful creation of Kalidasa.

When Shakuntala visits the king, she suffers. Her speech is long and impassioned, but rational. She is not whining or begging the king. She boldly tells Dushyanta of the future implications and results of his false action.

“O great king, even though you do recognize me, why do you say:

“I do not know you?” You speak thus carelessly as another, a low-born villain might speak”.

She further, says, “if you will not follow my advice O Dushyanta, you will reap the results of your present actions a hundred times”. Shakuntala’s strength echoes in her words at the end of the story.  Later when the king is left behind by Shakuntala he is filled with a feeling of remorse. Twice, he enters the sacred region, first the ‘tapovan’, hermitage of Kanva and later the hermitage of sage Kanva.

Before the king can enter this world he has to be purified. First he proves his worth by battling the forces of darkness and disorder that threaten the order of the universe. For this he has to be roused from the state of utter despondency into which he had fallen, weighed down by an over whelming sense of guilt. He had become disoriented, nerveless and swooned away.

It has rightly been said that words are keys to open doors for the imagination on its journey of exploration into the fictive world. Kalidasa has also employed the device of irony in the play to heighten the emotional impact of the situation. The use of curse motif and the ring justifies it. It provides an explanation to the recognition ‘abhijyan’ of Shakuntala. This recognition is for Dushyanta who knows the truth only after losing his wife.

In Act V, the repudiation of Shakuntala in the court of Dushyanta arouses the ‘karuna-rasa’ (pity) when she is literally deserted by her lover and husband who himself sits on the throne of Dharma. Here the motif of curse makes the story psychologically convincing. After their separation, the two lovers undergo a long ‘tapasya’ and their reunion takes place in the hermitage of sage Marica. Dushyanta’s filial love finds a forceful expression when he sees a young boy (Bharat) playing with a lion. The king greets the boy amazed by his boldness and strength. Tagore observes :

Kalidasa has made the physical union of Dushyanta and Shakuntala tread the path of sorrow, and thereby chastened and sublimated it into a moral union. Hence did Goethe rightly say that Shakuntala combines the blossoms of spring with the fruits of autumn, it combines Heaven and Earth. Truly in Shakuntala there is one Paradise Lost and another Paradise Regained.

The last Act shows Shakuntala as one doing rigorous penance that shows her as a matron and as an embodiment of motherhood. Modern readings of the play Shakuntalam have studied the character of Shakuntala from different perspectives like feminism, colonial point of view, moralistic reading, the play as an allegory, Shakuntala as an image of the middle class and the burden of tradition upon a woman in Indian society. The strength of Shankuntala in the play lies in her deep and powerful emotions which feed her strength of mind.

6 thoughts on “Character of Shakuntala in Abhigyan Shakuntalam by Kalidasa”