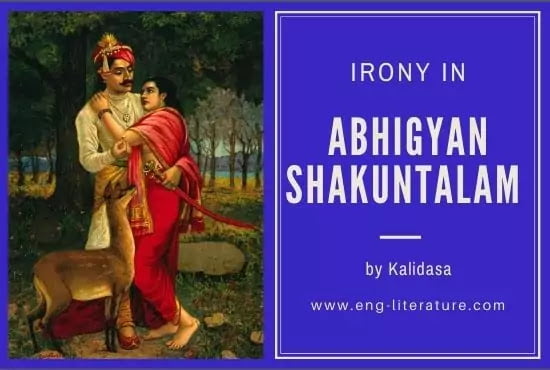 Irony in Abhigyan Shakuntalam by Kalidasa

Kalidasa being a phenomenal writer in Sanskrit literature extracts a simple story from the Mahabharata and gives it a new treatment by introducing the curse motif and the ring motif along with the structural device of irony. Irony has been employed as a powerful literary device to enhance and heighten the emotional impact of the narrative. Irony is the use of words that say the opposite of what one really means in order to make a point. It is used to achieve special rhetorical or poetic effects. Irony employed in Abhigyan Shakuntalam is of different types such as verbal irony, structural irony, sarcasm, dramatic irony, cosmic irony and romantic irony.

Verbal irony is a statement in which the meaning that a speaker implies differs from the meaning that is expressed. The ironic statement involves the explicit expression of one attitude. There is an ironic reversal of the surface statement. In structural Irony, the author, instead of using an occasional verbal irony, introduces a structural feature that serves to sustain a duplex meaning.

Dramatic irony involves a situation in a narrative in which the reader shares with the author knowledge of present or future of which a character is ignorant, cosmic irony or irony of fate involves a deity or late that manipulates events so as to lead the protagonist to false hopes. In romantic irony, the author builds up the illusion of representing reality, only to shatter it by revealing that the author is the creator of his characters. This type of irony involves a self conscious narrator in the main plot that brings the revelation.

Recognition (abhijyana) of truth is the central issue: in the play, Shakuntala is recognized “by virtue of a token of love, not by love itself. In the absence of concrete, tangible proof of love and marriage, she is lost.”

This token of love is the ring itself which is lost and later found by a fisherman. It is ironical that king’s lady-love is before his eyes yet he asks for some proof. Again, he has loved Shakuntala, the child of nature, carnally and it takes a long time for him to recognize her intrinsic beauty and feminine grace. He has to pay a heavy price for this and loses his wife and son. This initiates him on a journey to discover the meaning of beauty and love. Kalidasa lets the established ideals of society to be examined through the use of ironies. When he meets his own son in the hermitage of Marica who plays with a lion cub, Dushyanta describes the boy as ‘the young of a black serpent that spoils/for other creatures the pleasant sanctuary that is the fragrant sandal tree.’

Ironically, Dushyanta himself is the black serpent who has entered the ‘tapovan.’ The sandal tree is Shakuntala. Act V is full of ironies that leads to ‘rasotpati’ in the reader. Here, the personality of Dushyanta becomes more enigmatic and complex than it appears to be.

In Act I and Act VII, one finds graphic descriptions of the ‘tapovan’, the hermitages of Kanva and Marica. Here, one finds good-humoured irony at play. The ‘rishis’, seers and other ascetics have been presented as given to anger and anxiety. Through the undisciplined behaviour of Durvasa, the ideal of asceticism is questioned. Chandra Rajan observes that ascetic claims are subjected to ironic scrutiny in Act V.

A number of disciples of Kanva are given to anger and also suffer from complexes. Sarngarava can be easily provoked and he lacks self-discipline. Other disciple of Kanva is Saradvata who is observed with the idea of cleanliness. Sage Durvasa is the main example of this type of behaviour. Kalidasa also makes use of the device of foreshadowing in the main plot. King Dushyanta refuses to recognize Shakuntala and she is stripped of dignity.

“Such isolation is of the essence of a tragic situation in life. The play is poise on the edge of tragedy from which it must now be retrieved.”

It is not Shakuntala who proves her innocence but a fisherman who by chance produces the signet ring of the king. A great sage like Kanva fails to press upon the king to accept the reality and he leaves it to her destiny. The trial scene presents Shakuntala as an isolated being, abandoned by society. Now she faces the existential limit and look up towards heavens. Suddenly the Apsara Menaka appears and vanishes after taking Shakuntala away. In this regards, the remarks of Chandra Rajan on the tragic tone of the play need attention:

“The reconciliation and reunion of Sakuntala and Dushyanta takes place in another world, the golden world of the primal pair. The resolution of the plot is effected in this mythical world; therefore, one way of reading the play is to see it as having a fictive ending. By introducing the device of a deus et machina, the situation is saved, temporarily; the tragedy is averted, but the tragic tone remains.”

In Sanskrit literature, one does not find pure tragedies like the Greek tragedies but plays with tragic tone.

“There are moments of bitter irony accompanied by flashes of pure good humour. But the play, though it has had its tragic moments, closes on a note of serenity, expressing the poet’s vision of peace and harmony in a world where order has been restored.”

In Act I, Shakuntala is alone in the hermitage as sage Kanva is out on a pilgrimage. Here the irony is that it is during the absence of Kanva that she surrenders before an unknown person who enjoys her carnally. This episode leads her to a close encounter with the tragic fate. Again, when she asks Kanva to let her know about the delivery of her pet deer, it is ironical that the birth of her own son, the successor of Hastinapur remains a secret.

At one place, a reference is made about how the cuckoo transfers her offsprings in the nest of crows for rearing. This is tragic irony that suggests that Shakuntala is in family way and her son will be brought up in the palace. The opening words of Shakuntala’s love letter contain dramatic irony that is a proof of her love for the king but it is an exercise in futility. The king has already become forgetful of his sylvan love. Umashankar Joshi observes:

“Irony can be seen as being availed of as a structural principle, giving the work its artistic form. It plays a supremely significant role in the juxtaposition of the fourth and the fifth acts giving an edge to the artistic impart of the structuring of the play by describing the superb scene of the send off to Shakuntala, a scene of consummate harmony in the life of man and nature, that of a sort of Cosmic harmony, only to be shattered or at least savagely disturbed in the ensuing court scene.”

Irony can be seen working as a structural principal holding the central issue of the play. The two motifs have been incorporated to make irony more effective and suggestive. It is an irony that Shakuntala is lost in love and she almost loses love itself.

The poet’s mastery over word, sound, rhythm, image, technique and dramatic structuring amply match his cosmic vision and the happy result is a unique play embodying the immortal beauty of human love. Thus, irony as a literary device has been employed by Kalidasa to maximize the emotional impact in the play, and the play presents the wonderful orchestration of Kalidasa’s poetic self.