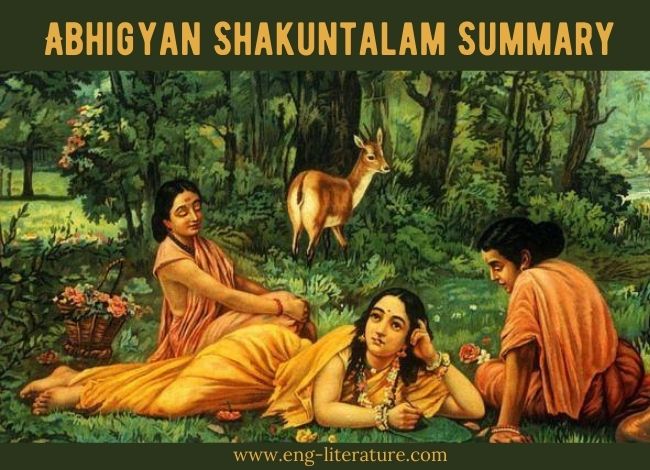 The story of Dushyanta and Shakuntala is in the Book of the Beginnings (Adi Parva) of the Mahabharata from chapter sixty seven to chapter seventy four. In the epic, the narrative of Shakuntala is devoid of any erotic overtones. Kalidasa has employed dramatic devices to enhance the poetic and dramatic effect of the narrative. The same narrative is found in Padma Purana. Kalidasa has made some departures from the story form in the Mahabharata. The episode of the signet ring is an important addition by Kalidasa in Shakuntalam. First, it would be worthwhile to have a look at the renderings of the story of Abhigyan Shakuntalam in the Mahabharata and the Padma Purana respectively.

THE STORY OF ABHIGYAN SHAKUNTALAM

The first Act begins with the description of the summer season by the narrator (Sutradhar). He also introduces king Dushyanta. Then king Dushyanta chasing a deer, enters the ashram of the sage Kanva in his Chariot. The king aims at the deer but a monk restricts him to hunt in the premises of sage Kanva. Then the monk invites the king to the ashram and Dushyanta enter the ashram. The monk informs the king that sage Kanva is out for some days. Shakuntala accompanied by two companions, Priyamvada and Anusuya welcomes the royal guest. The king is surprised to see the beauty of Shakuntala.

The king is also love-sick. He enters the stage with the fool (Vidushaka). The fool is fed up with the business of hunting in the forest. The king forbids his general and soldiers to kill any animal and instructs them not to disturb the holy men. He confesses to the fool that he cannot live without Shakuntala. He asks the fool to manage his stay there for some more time.

Two ascetics, young ones arrive and request the king to protect their sacred fire-place (Yajna Shala) from the plundering of the demons (rakshas). The king happily agrees. The messengers from the kingdom inform the king about his mother’s instructions to bring the king. Dushyanta sends his army back and himself stays back. He also forbids the fool not to reveal this secret to his other queens in the town He decides to make Shakuntala his patrani, the queen of queens.

Shakuntala has so far spent her life amid the quiet, sylvan surroundings of the ashram but now her contact with a handsome young king has made her love-sick. She is seen lying on the bed of flowers, thinking of Dushyanta. She discusses the matter with her companions. Mean-while Dushyanta is hiding in a groove listening to their confessions. Shakuntala confesses that Dushyanta can be her only mate in this world, and that she will not live without him. The king appears on the scene and declares his love for Shakuntala. The two companions leave the scene and the two lovers have an opportunity to know each other. The king proposes the enactment of the ‘gandharva’ marriage yet Shakuntala is reluctant. The king leaves the place to protect the ashram from the wrath of the demons.

In Act-IV, the ceremony of ‘Gandharva’ marriage is solemnized. After spending some time with Shakuntala Dushyanta leaves the ashram to look after his kingdom. He assures Shakuntala that he would send his men to fetch her to his capital. Since that day, Shakuntala has been feeling lonely and love sick. One day, she sits on the door of her hut. A great sage Durvasa, known for his anger, arrives and asks for alms but Shakuntala is lost in her thoughts. The enraged rishi, curses Shakuntala by saying that her husband would forget her. Her companion Priyamvada apologizes to the sage and asks him to help Shakuntala. The sage tells her that by showing any ornament of her lover to him, he will remember her.

Priyamvada and Anusuya know about this curse and Shakuntala is unaware of all this. They know that the signet ring of Dushyant is with Shakuntala. They assume that the presence of the signet ring will neutralize the impact of the curse. So they don’t tell anyone about this.

When sage Kanva returns from his pilgrimage, he hears a prophecy from the heavens about the marriage of Shakuntala with king Dushyanta. He also learns that Shakuntala is pregnant. He peeps into the womb of future with his spiritual powers and sees the bright and illustrious career of the son of Shakuntala. He approves of this marriage.

On the other side, the curse of Durvasa shows its power. The king becomes oblivious of his relationship with Shakuntala and no one comes to the ashram to take Shakuntala. Shakuntala is pregnant and the sage makes necessary arrangements to send Shakuntala to her husband. Here Kalidasa provides a poignant description of the departure of Shakuntala when she bids adieu to her friends, deer, pets and even trees. sage Kanva is deeply pained to see this but he gives elderly advice to Shakuntala. Along with a woman Gautami and two ascetics, Shakuntala arrives the kingdom of king Dushyanta.

Shakuntala is accompanied by two young ascetics Sharangrav, and Sharadvat, and a woman Gautami. They appear before the king. Sharangrav tells the king about the previous development, and that Shakuntala is his wedded wife. The ascetics tell the king that sage Kanva has also approved of their ‘gandharva’ marriage, and so he has sent them to the king. But king Dushyanta is under the spell of the curse, so he fails to recognize Shakuntala.

Gautami shows him the face of Shakuntala but he shows his helplessness. Now Shakuntala is reminded of the signet ring of Dushyanta but that ring is missing. On the way, the ring slips from her finger and falls into a river. The ascetics try their best to persuade the king but of no use. The ascetics and Gautami leave Shakuntala and depart. Shakuntala weeps and mourns. Then a celestial nymph Menaka (an apsara in the court of god Indra in heaven) comes from heavens and takes Shakuntala to the skies. The king is shocked to see this.

One day a fisherman has a good catch in the river and he finds a gold ring in the belly of a fish. He comes to the market to sell it. It is the same signet ring of Dushyanta which he had given to Shakuntala. The soldiers take him to be a thief and bring him to the royal court. When the king sees the ring, the curse loses its potency, and he at once remembers his marriage with Shakuntala. But her mother Menaka has taken her away and the king is now grief-stricken. One nymph (apsara) visits the palace to see the condition of Dushyanta. She is invisible and finds the king grief stricken.

The guard brings a letter from his minister that informs him about the death of a merchant in a boat accident. Now his property would go to the royal treasury. The king now realises if he dies without a son, then his wealth will also go to others. He faints. Then the charioteer (Sarthi) of lord Indra, Matali arrives from heaven to take Dushyanta to a battle with the demons. Dushyanta at once leaves for heaven to fight with the mighty demons and assist gods.

King Dushyanta defeats the demons and helps the gods to retain supremacy in the three worlds. Lord Indra honours the brave king and bids him farewell to the earth. On his way back to the earth, Dushyanta is attracted by the beauty of Hemkoot mountain where sage Mareech meditates in his ashram. Dushyanta comes down from the chariot to pay his regards to the sage. In the ashram, the king sees a healthy boy playing with a lion. He is trying to count the teeth of the lion. The king is amazed to see this brave boy. The boy resembles the king and instinctively, Dushyanta develops a liking for the boy. The king is informed that the boy’s mother’s name is Shakuntala and the boy belongs to Puru family. Dushyanta at once realizes that he himself is the father of this boy. Shakuntala appears on the scene and falls on his feet. She weeps bitterly.

The king apologizes for everything that has happened with Shakuntala. The king visit’s the sage Mareech to pay his regards. The sage tells the king that due to the curse, the king could not remember anything about his marriage with Shakuntala. So the king proves his innocence. The sage blesses both of them and sends them back to their kingdom. This boy is Bharat who becomes a great king and a warrior. The play ends on a happy note.

The play the Abhigyan Shakuntalam is a testimony of the poetic genius of Kalidasa. He is also regarded as the best poet in Sanskrit language. Historical evidences show that Kalidasa lived in the First Century B.C.

13 thoughts on “Abhigyan Shakuntalam by Kalidasa Summary and Story”