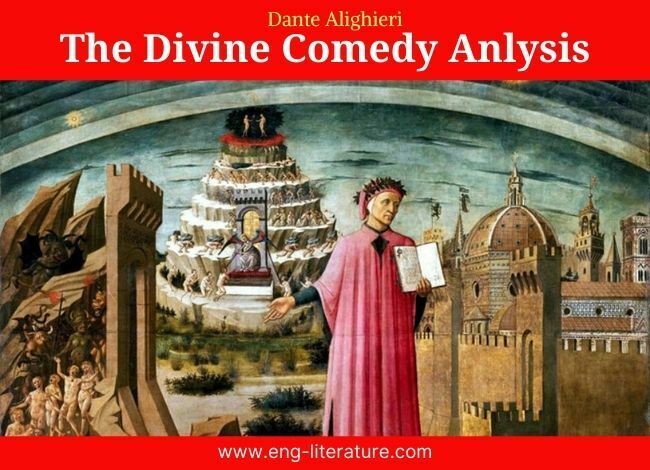 Dante’s Divine Comedy is one of the most remarkable poems that have come down to us from the middle ages. In Lecture III of his Heroes and Hero-worship, Carlyle is all praises for it. He calls it “divine song”, “the transcendental, mystic song”, “the voice of ten silent centuries” the “Christian epic” which makes articulate the soul, the moral nature, of the middle ages. It is an expression of the suffering, of the devotion and hard work, of sincerity and truthfulness, of intensity of vision, and of the moral profundity and intellectual greatness of its author.

The Divine Comedy: Its Three Parts

The epic describes Dante’s imaginary journey through all the three division of the invisible world of spirits. Dante is led by the soul of the ancient Roman poet, Virgil, through Hell and Purgatory and then is led by the spirit of Beatrice through the regions of Paradise. The poem is an impassioned and imaginative summary of what was highest in the thought and aspirations of the Middle Ages. Dante gives us numerous similes and images drawn from external Nature: phenomena of earth and sky, the play of light, the flight and song of birds.

“The style is remarkable for its pregnant conciseness and its range of modulation, now epical in intonation, now moving with the freedom of familiar speech and conversation, now rising in exquisite flights of lyrical ecstasy.”

The Divine Comedy: A Great Epic

The Divine Comedy is at once a vision of the other world, an allegory of Christian life, a spiritual autobiography, and an encyclopedic embodiment of the knowledge of its day. Dante sets forth the Catholic beliefs as to the nature of Hell, Purgatory, and Paradise. He makes his imaginary journey through these realms a symbol of the Christian struggle, through repentance and purification, towards the beatific vision. He introduces also his own redemption from sensuality through devotion to Beatrice who is for him the medium of divine grace.

Dante employs the learning, the science, the literary devices, mythological figures, and poetic machinery, which could be furnished by the best learning of the time. Of this learning, the figure of Virgil, his guide through Hell and Purgatory, is the representative. It consists of one hundred Cantos in all. Each Canto is of approximately the same length and the three realms are described in symmetrical order and proportion.

The metre is the terza rima, consisting of lines which fall into groups of three with interlacing rhymes-the first and third of one group rhyming with the first and third of the next group. Its sustained music, the concentration and intensity of its style, its wealth of allusions, its pictorial vividness, and its austere beauty, make it one of the greatest epics of the world.

The Divine Comedy: A Song in the Real Sense

The Divine Comedy is a song in the real sense of the word. Coleridge defined poetry as musical thought. It is a song, it shows the inner melody or harmony of the poet; it is “the heroic of speech”. It is musical both in its manner and matter. It is an expression in musical language- rhythm, rhyme, cadence- of his musical thoughts. Only one who has this inner music has a right to express himself in poetry, otherwise he should write plainly without resorting to jingling and rhyming. Precisely as we love the true song, and are charmed by it as by something divine, so shall we hate the false song, and account it a mere wooden noise, a thing hollow, superfluous, altogether an insincere and offensive thing.

The Divine Comedy: Its Sincerity

Its three parts – Inferno, Purgatorio and Paradiso-are like the three parts of a symmetrical and well-proportioned building. It is like a great and majestic building, solemn and awe-inspiring. It is the sincerest of poems, its sincerity being the real source of its greatness. It came out deep from the heart of its poet, and so it goes down deep into the heart of its readers. Dante’s very face showed that he had been down in Hell, and such divine comedies come only from the pen of those who have been in Hell, in long severe sorrow.

The Divine Comedy abounds in graphic and vivid descriptions and portraits. This vividness arises from its poet’s intellectual superiority and his sympathy with his subject. Dante’s painting is not only graphic, but also noble, the outcome of a great soul. The scenes are painted in a large variety of colours but the background throughout is sombre and dark. Eternal wailing of tormented souls is constantly heard. It has been said that the Divine Comedy is the result of Dante’s irritation, impotent rage and thirst for revenge; he has put in Hell everyone on whom he could not have his revenge.

Is The Divine Comedy An Allegory?

The Divine Comedy is capable of allegorical interpretation, and has been so interpreted. It has been called a Christian allegory, embodying the Christian concepts of Good and Evil, of sin, of repentance, and of purification through suffering. In this respect, it is the most Christian book that has come down to us from the middle ages. Good and Evil are the two poles on which it turns, and they are represented in their complete and eternal contraries.

But if it is an allegory- a Christian allegory– it is an unconscious one. Dante firmly believed, he had full and unshaken faith, in the reality and authenticity of his world of spirits. It might be interpreted allegorically, but it was not consciously set up as an allegory. It is an expression of Dante’s sincere and intense faith and not merely an emblematic representation of something which is merely imagined and not believed in. Further, it differs from other

If at allegories, say Pagan allegories, in one important respect all it is an allegory, it is a moral allegory, and not a sensuous one. It allegories the Christian concepts of duty and morality, and not the sensuous operations of nature. If thus marks a long step forward in the history of human thought.

The Divine Comedy: Its Permanence and Universality

Dante’s epic, a mystic song, is not only the expression of one of the noblest of souls, but also of the highest achievement of Europe up to that time. It is an expression of Christianism nobler then the older pagan religions or the Muslim religion. Carlyle calls it Bastard Christianism-preached in Arabia seven hundred years earlier. In his book Dante has made articulate the noblest ideas permanently. His work will be as everlasting and as universal in its appeal as the epics of Homer or the Psalms of the ancient Hebrew prophets. This is so because like them, Dante speaks from the depth of his heart and so his words go down deep into the heart of his readers. Europe has achieved much, but even if all its other achievement’s were lost and destroyed, Dante’s Divine Comedy would continue to speak to the heart of men.