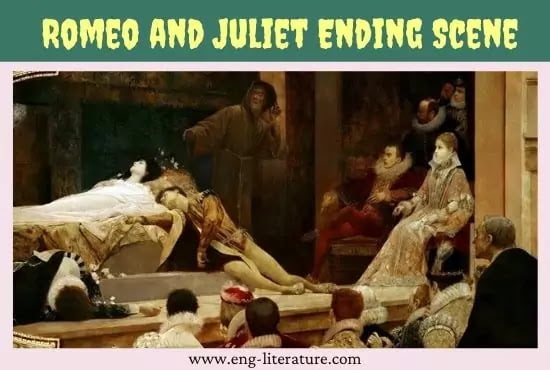 The last scene or the end of Romeo and Juliet begins in darkness broken only by the faint light of a torch. The scene takes place in the vault of the Capulets.

It is surprising that it should be Paris who visits the tomb first, when it is Romeo whom we are expecting. The body of Juliet is dimly visible lying on a tomb. Paris strews flowers upon her body. His page whistles to inform him that someone is approaching. Paris withdraws into a recess as Romeo and Balthasar come to the vault. Romeo gives a letter to his servant to be delivered to his father and instructs him, on pain of death, to leave the churchyard. Balthasar, however, hides himself in the churchyard. Romeo opens the gate of the vault and enters Paris cries –

Can vengeance be pursued further than death?”

Romeo is a desperate despairing man. He urges Paris to leave him. He requests him not to provoke him, and not to put another sin upon his head, by forcing him to kill him Paris refuses to withdraw, defies him, and draws his sword, crying out that he will apprehend him for a felon. They fight savagely. Paris is slain. Before Paris dies he implores Romeo to lay his body beside that of Juliet. Romeo now recognizes him, and drags his body into the vault, and lays it beside Juliet’s tomb.

👉Character of Nurse in Romeo and Juliet

Then he looks at Juliet and wonders at her sleeping beauty:

Why art thou yet so fair ? Shall I believe

That unsubstantial death is amorous

And that the lean abhorred monster keeps

Thee here in dark to be his paramour?”

Romeo wonders at the beauty of Juliet even though she is dead, as he thinks. He thinks that the monster of the underworld has fallen in love with her, and has taken her away there to make her his queen.

This is the last speech of Romeo. It is called the Death Speech, because after this he dies. After killing Paris, who challenges him in the churchyard, he lays him beside Juliet’s tomb.  He calls to Tybalt and begs pardon from him. Then he drinks the poison, kisses Juliet and dies.

Soon after Friar Laurence enters. He sees the dead bodies of Paris and Romeo. Juliet opens her eyes. With a sweet smile she greets the Friar and asks about Romeo. He tells Juliet that a greater power has thwarted their intents. He urges her to run away with her. She refuses. Fearing the alarm of the approaching watch, the Friar runs away.

Juliet gazes in anguish at the dead body of her Romeo. She has wakened only to find the world empty of all glory. There is nothing loft but to sink back into ever-lasting sleep. She kisses Romeo’s lips to see if come poison still hangs there, and then, as the watch approaches, she kills herself with the dagger of Romeo.

The watch has now reached the vault. The churchyard is searched. The Prince, the Capulets and the Montagues are summoned. Balthasar and the Friar are apprehended. The Friar relates the story in detail. Balthasar gives his explanation and delivers the letter. The letter and Balthasar’s explanation bear out the Friar’s words.

“Thus the play ends with the reconciliation of the two families and:

A glooming peace this morning with it brings.

The sun for sorrow will not show his head

Go hence, to have more talk of these sad things.

Some shall be pardoned, and some punished.

For never was a story of more woe

Than this of Juliet and her Romeo.”

In the concluding lines the Prince says that the morning has brought glooming peace. It is glooming because the hero and heroine have died. It is peace because the death of Romeo and Juliet has brought reconciliation between the rival families, Capulet and Montague. The Prince promises to do justice, to punish the guilty persons and pardon others.

Shakespeare’s tragedies, in spite of their sorrow, end on a quiet note. They never depress us. We are made to feel the depth and not the tumult of soul. In Macbeth Shakespeare consoles us for the death of Duncan with the words “After life’s fitful fever he sleeps well”. In Julius Caesar the note is of peace the glory of this happy day. Romeo and Juliet end on ‘glooming peace.

This scene is valued for the simplicity of the speech in which there sings true pathos. The last speech of Romeo is beautiful and moving. The horror of death associated with the tomb, hanging for so long, here becomes a reality.