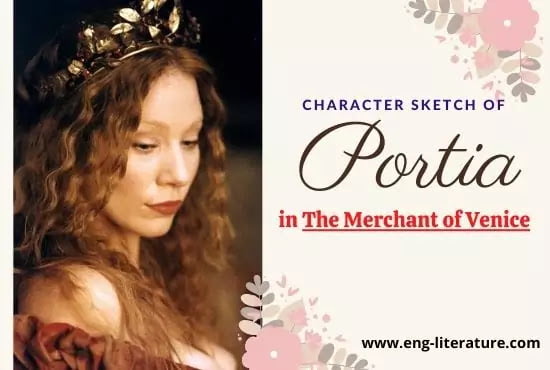 Portia is one of the dynamic female characters of Shakespeare. She plays a very significant role in The Merchant of Venice. She is the connecting link between the Bond-story and the Casket-story. She rounds off the complication of the Bond-story by her legal quibble. She is the most attractive figure in the Bond-story. Her intellectual capacity, her wit, her loveliness and her maidenly virtues make her the most interesting character in the play. In other words, she dominates most of the parts of the play.

Portia’s wit is revealed when she converses with Nerissa. She has a pretty wit and a sharp tongue. The humorous touches, with which she hits off her various suitors, as they are over-named to her, display not merely a genuine wit but a shrewd intellect. Her ironical portraiture of the French, English and Scottish types is a testimony to her sense of humour. She says of the Prince of Morocco:

“If he has the condition of a saint, and the complexion of a devil, I had rather he should shrive me than wive me.”

Portia’s humour comes from her acute intellect. She is a highly accomplished woman. She speaks Latin, French and Italian, and only finds difficulty in speaking English. She is exceedingly beautiful and well-acquainted with the graces of life. Her love of music, her resourcefulness, her legal acumen is testimony to her intellectual superiority. Her intellectual ability is fully revealed in the trial scene. In outwitting Shylock, her intellect acts not only with lightning speed but also with steady caution. She makes a noble appeal to mercy but she knows that even if it falls in its immediate purpose, it will have its effect in disarming Shylock’s suspicion and thus, when she plays her trump card, Shylock’s collapse is completed. It is because she has an unclouded intellect that she can fully size up Shylock and outwit him by an intellectual jugglery about the bond on which he relies with fanatical insistence.

Portia sparkles with wit but she can be serious when the circumstances call for it. She can turn from gay to grave. This is noticeable when she breaks off from her own happiness in her love for Bassanio. On hearing that his wind is in trouble, she is ready for immediate action: “O love, dispatch all business and be gone!”. The blend of the gay and the serious is now here better illustrated than in the manner in which she turns from the serious issue of the trial to the gay affair of demanding of Bassanio the ring she herself gave him. The earnestness is shown in the trial in her incomparable appeal to Shylock to show mercy. This ability to do important things with ease and grace is the crowning proof of Portia’s strength. She shows dignity and seriousness in moments of crisis. In the trial scene, she maintains a dignity and seriousness worthy of her accomplishments.

Portia: Her sense of honour

The seriousness of Portia’s nature reveals her sense of honour. She frets at her father’s will which curbed her own will. Her brain is never befogged by emotional susceptibility. Although she is in love with Bassanio, she does not give him a hint of the solution of the riddle. This shows her sense of honour. Her honourable conduct is best seen in her attitude on hearing Antonio’s misfortune. She dismisses all marriage festivities and asks Bassanio to leave for Venice. She pays all the money that Bassanio requires to save his friend. Indeed, this is a very noble conduct.

Portia’s great ability is matched by an equally great modesty. She is womanly in her passion, and in the bashfulness in speaking out that passion. Bassanio receives fair speechless message from her eyes during his first visit to Belmont. But she cannot conceal her passion when Bassanio comes to make his choice of the casket. She does the difficult task of revealing to Bassanio her affection for him, without seeming to do so, by counselling him to say a while before he chooses the casket. On his choosing the right casket, she delivers:

“You see me, Lord Bassanio, where I stand,

In the character of Portia, wit and womanliness is combined. She has the mercurial wit combined with the grace and dignity of a woman. She is full of penetrative wisdom, genuine tenderness and lively wit. She has the qualities of intellect and strength. She preserves her values and believes in both Venice and Belmont. She stands for female resistance in a male world. Actually, she dominates the whole play.