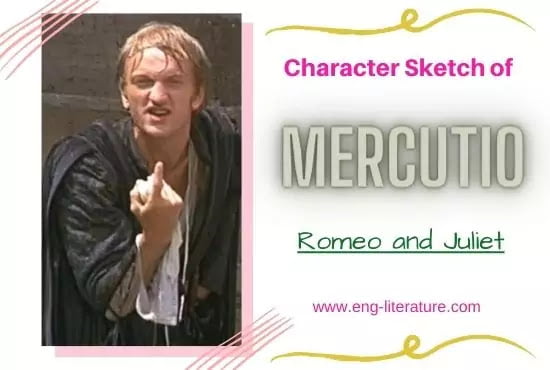 Mercutio in Romeo and Juliet

Who was Mercutio in Romeo and Juliet?

Mercutio is the most brilliant character in the play. There is only a hint of Mercutio in the source from which Shakespeare took him. He developed his character and made him one of the most sympathetic characters. Mercutio is not involved in the family fends. He is a kinsman of the Prince. He is invited to the party of the Capulets. He is the friend of Romeo and Benvolio. He is gay and brave and mocking. He has the gay poise and the rippling wit of the man of the world. By temperament he is merry and his charm is infectious. Beyond dispute he has vitality, wit, and personal magnetism.

The praise that Mercutio receives makes him a hero. It has been said that Mercutio’s presence in the play is necessarily cut short by Shakespeare because his vivacity threatens any sympathy we may have for Romeo. Mercutio is always a success on the stage, while Romeo is insipid. The early death of Mercutio is the necessity of the plot, not a proof of his overshadowing Romeo and becoming hero. He stands next to Romeo and Juliet. In this respect Bryant says: “In fact, some critics who consider him more interesting than the two protagonists have suggested that Shakespeare finished him off in Act II out of necessity. This is almost as absurd as the view that Shakespeare wrote Falstaff out of Henry V because the fat man had become unmanageable.”

Mercutio is a man possessing all the elements of a poet. He has a fertile imagination and an exuberant flow of words. Romeo bas to interrupt the fanciful Queen Mab speech with ‘Peace, peace, Mercutio, peace’ to tone down his flowing imagination. For all his superficial show of irresponsibility, he is made in the image of his creator.

He is a realist and has a touch of wit and humour. He despises sham and affectation. He despises Tybalt as the ‘king of the cats’ for his method of fencing : ‘A duelist, a duelist. A gentleman of the very first house, of the first and second cause. Ah, the immortal passado, the punto reverso ! the hay.’

Like a realist he asks Romeo to “Be rough with love”, when Romeo persists in day dreaming. The real purpose of the long Queen Mob speech is to compel Romeo to acknowledge his senses and to bring him to an honest and healthy confession of what he is really looking for. Romeo is wrapped in self-delusion. Later in the battle of wits he has succeeded when he says “why, is not this better now than groaning for love? Now art thou sociable, now art thou Romeo.” There are no wiser words in the whole play.

The Nurse and Mercutio are two fountains of loquacity. He has a fertile imagination which the Nurse does not possess. Like the Nurse, however, he is coarse and vulgar. He is a bawd. Both of them can think of nothing but sex except when they are busy eating or quarrelling. Mercutio cannot so much as look at the clock without a bawdy thought.

Mercutio is pugnacity in its pure creative state. His description of Benvolio as a man who quarrels over trifles in Act III Scene I is the picture of himself. He is like Tybalt hot blooded and would fight under the slightest pretext. He is to pick a quarrel under any and all circumstances and at any price. Goddard commented about Mercutio in his book entitled The Meaning of Shakespeare, “Sensuality and pugnacity are the poles of his nature. In the latter respect he is a sort of Mediterranean Hotspur, his frank southern animosity taking the place of the idealistic ‘honour’ of his northern counterpart. He is as fiery in a literal as Romeo is in a poetic sense.” Romeo is “star-crossed” for having him as a friend.

Mercutio dies with good humour “Ask for me tomorrow, and you shall find me a grave man.” He is most attractive in his dying speech. He is deeply regretted by the audience. Expert in his stage-craft Shakespeare has given to Mercutio such engaging lines that he makes us excuse Romeo in his rash avenging of Mercution. We want Romeo to show himself a man against Tybalt, in spite of our terror at the consequences. The catastrophe of the play depends on his death.

The death of Mercutio is like the removal of a shifting breadth of sunlight which sparkles on the sea; now the clouds close in upon one another, and the stress of the storm begins.

Mercutio is light hearted, gallant, witty, audacious, mischievous, and brilliant. Brave almost to rashness, and ready for any enterprise, his sword is easily unsheathed. But he is not naturally of a quarrelsome disposition. He hates folly and pretentious bluster. He always expresses his contempt for those who stand so much on the new form that they cannot sit at case on the old bench.