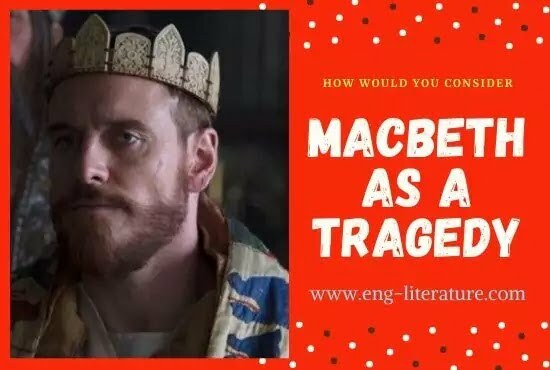 Macbeth as a Tragedy

The downfall of Greek heroes is pre-determined by the oracles or fate but the downfall of the Shakespearean heroes is determined by their impulse, by their passion. In Greek tragedies “Destiny is character” where we are primarily interested in how fate fulfills itself through characters. But in Shakespearean tragedies “Character is destiny” where the characters exhibit their essential worth before they succumb to their fate. In the play Macbeth, in spite being gifted with noble virtues Macbeth meets his tragic damnation for his over-vaulting ambition.

In a Shakespearean tragedy, the tragic heroes are men of high status and of noble nature. Romeo is an aristocrat; Richard II and Richard III are kings; a General; Brutus is highly placed; Antony is more than a king – an emperor; Othello is a mighty General; Hamlet is a prince; King Lear is every inch a king; and Macbeth is first a General and then a king, though not embodiment of virtue and goodness, they are much above the average level of humanity.

The heroes of Shakespeare have an inherent weakness, a tragic flaw as described by Aristotle as hamartia. This flaw makes the hero essentially human. Unlike the heroes of the Greek tragedies, the Shakespearean heroes are responsible for their ‘fall. Othello faces his tragic damnation for his highly suspicious nature or easily believe what he is said; Hamlet for his indecisive nature – “to be or not to be”; King Lear for his error of judgment and in same line Macbeth for his unbridled ambition.

According to Aristotle, a villain cannot be the hero of a tragedy, and Macbeth is not a villain. He becomes a villain and that is his tragedy. It is not true to say that Shakespeare has departed from the Aristotelian conception of tragedy. But actually Shakespeare has made a hero out of a villain, and that is a testimony to his genius. Macbeth is constantly oppressed by the sense of guilt. He is not a villain like Edmund or Iago.

Muir rightly observed, “Macbeth is hero who becomes a villain.” Shakespeare retains our sympathy for Macbeth even after his first murder. The first crime is inspired by ambition. His other murders are inspired by fear. Macbeth himself feels the retribution within himself. He becomes sick at heart; he is full of scorpions in his mind. He knows that he has murdered ‘sleep’, and he will live a restless, fearful and insecure life. He degenerates and this degeneration is his tragedy.

The brave, noble Macbeth becomes a senseless maniac, a hypocrite, a liar, a butcher. This is the tragic collapse of such a noble and gifted man. In this respect, he is like Faustus, who falls from a great scholar to an entertainer and trickster. His final portrayal “To-morrow and to-morrow and to-morrow” in which he describes what a waste he has made of life shows Macbeth’s imaginative power through which Shakespeare achieves the ambivalence of tragic effect. His despair is expressed in superb poetry:

“My way of life

Is fall’n into the sear, the yellow leaf.”

In the tragedies of Shakespeare there may be a triumph of Evil for the time being, but the ultimate triumph of Good is assured There may not be the poetic justice, but moral order is clearly manifest. The wicked have to pay the penalty. Macbeth has offended the moral order and he has to pay penalty by way of internal sufferings and external opposition to him.

In a Shakespearean tragedy the hero dies, and so does the heroine. Macbeth dies; Lady Macbeth also dies. Romeo and Juliet die; Othello and Desdemona die; Lear and Cordelia die; Hamlet and Ophelia die; Antony and Cleopatra die; Brutus and Portia die.

Judged from the Aristotelian point of view, Macbeth is certainly not an ideal tragedy in the sense Othello or Julius Caesar is. For in Macbeth there is no hamartia but mochtheria, which is moral depravity. But to dismiss it as “the least successful of all the tragedies” is a travesty of truth. For Macbeth has to commit a series of crimes against his conscience and his own better nature. One part of his being recoils from the bloody deeds, and yet the evil genius is urging him on.

Macbeth’s misdeeds are followed by Nemesis, and that gives us a clue to a new interpretation of Macbeth as a classical tragedy. As in the Greek tragedies, so also in Macbeth there is the unity of action. The tragic ironies show the resemblance between Macbeth and the Greek tragedies. Bradley, however, does not subscribe to the view that Macbeth is like a Greek tragedy. “I don’t mean“, Says he, “that Shakespeare intended to write a classical tragedy.” Macbeth as a tragedy approximates very closely to the Senecan model with its blood and thunder, its murder and madness, its ghost and supernaturalism.