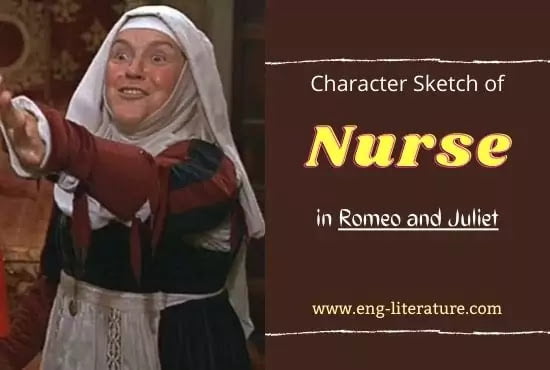 Shakespeare has delineated the character of the Nurse with wonderful artistic skill in his Romeo and Juliet. Much of the humour in the play is derived from her foibles. She had been wet-nurse to the baby Juliet. And when Juliet is grown up, she is her confidante. She is not a friend nor an ordinary servant, but one with whom Juliet has close emotional ties. It is by her help that the lovers are able to come together. She is the only lady to whom Juliet can turn to share her excited joy in her new found love. She is a natural ally of both Romeo and Juliet especially of the latter.

She is garrulous. She talks and talks. She cannot be restrained. When she has news to give, she rambles maddeningly before coming to the point. She beats about the bush. She uses her wordiness to tease Juliet. She does not tell clearly whether Romeo has agreed to marry Juliet or not. Even when she does not intend to confuse, she cannot speak clearly and briefly. She is all confusion. She informs the murder of Tybalt in such confused way that poor Juliet does not understand whether Tybalt or Romeo or both are murdered. In this respect she can be compared to Mercutio. The Nurse and Mercutio are two fountains of loquacity. They are two rival talkers. Romeo says of Mercutio “A gentleman, nurse, that loves to hear himself talk, and will Speak more in a minute than he will stand to in a month,” What Romeo says of Mercutio is true of the Nurse as well. The cap fits her so perfectly that she puts it on two Speeches about Mercutio which are typical examples of her love of hearing talk.

Nurse is the trusted servant of the Capulet household. She is proud of her charge. She dilates upon her services with a complacent feeling of satisfaction that whatever is good in the girl had its origin in her nurture. Her vanity comes out in her encounter with Mercutio. She bullies Peter because Mercutio uses her at his pleasure. She flies at Mercutio and calls him ‘sancy merchant’

She is an only garrulous ad vain. She is also coarse and vulgar. She is so vulgar that she is almost a bawd. “A bawd ! a bawd ! a bawd !”, this is how Mercutio describes her. She is babblingly given to reminiscence scuffed with animal humour. She speaks to Juliet.

Thou wilt fall back when thou comest to age.

She speaks to Lady Capulet

To her love is animal lust. G. R. Evans says about her “Her bawdiness, her basic crudity of sense and sensibility seem like a sore against the white flesh of Romeo and Juliet’s love. To her, love means sex, marriage means bed, and he swelling of female belly the only possible affirmation of the existence a loved.” She is an old sensualist. She warns Romeo against gross behaviour towards her lady. But the truth is that she would have been delighted to have Romeo corrupt Juliet provided she could have shared the secret.

Relationship between Juliet and the Nurse

Though coarse and vulgar, Nurse loves Juliet. She affectionately recollects of Juliet’s childhood. She admonishes Romeo

if ye should lead her in a fool’s paradise

…… it were a very gross kind of behaviour

She pleads for her ‘lady-bird’ against the outrage of Capulet.

“God in heaven bless her: you are in blame, my lord, to rate her so,

These examples show that she loves Juliet. She advises her lady for bigamy not out of malice but out of her ignorance and vulgarity.

The Nurse is never constant. She always changes according to the situation. She is emotionally unstable so that tears fall as readily as laughter. She is a chameleon and takes colours from the safest atmosphere. She rejoices that Juliet should be sought by Paris, not because she knows anything of that suitor’s fitness, but because it is a fine thing for a maiden to have a lover. She is equally rejoiced that Juliet should have fallen in love with Romeo. She will help in the secret marriage. When Juliet pours forth her wrath against Romeo for the slaughter of Tybalt, the Nurse is with her. When Juliet’s mood changes, the Nurse veers round with an offer to fetch Romeo. When the marriage with Paris is decided upon by the parents it is plain to her that it is useless to resist the authority. Her supreme law is expediency.

She fails her “lady-bird’ in her dire need. When her cruel parents force her to marry Paris, Juliet turns to her Nurse for counsel. The Nurse advises bigamy. She says to Juliet:

“I think you are happy in this second match,

For it excels your first, or if it did not.

Your first is dead, or ’twere as good he were

As living here and you no use to him.”

The man she formerly likened to a toad suddenly becomes superior to an eagle, When, in her darkest hour, this woman who had acted as mother to her from birth goes back on her completely, in a flash of revelation, Juliet sees what she is and calls her ‘most wicked fieud’ and ‘Ancient damnation’. What more ancient damnation is there that sensuality. She has asked Juliet to commit the sin of taking a second husband while the first is alive. Goddard writes about her

“Those who dismiss the Nurse as just a coarse old woman whose loquacity makes us fail hopelessly to plump the depth of her depravity. It was the Nurse’s desertion of her that drove Juliet to Friar Laurence and the desperate expedient of the sleeping potion. Her cowardice was a link in the chain that led to Juliet’s death.”

The treachery of the Nurse isolates Juliet. The Nurse, however, fails not because she bear’s malice or grudge to Juliet, but because of her expediency and her low morals. She cannot understand the depth of Juliet’s heart. She thinks that for the purpose of love, which to her is sex, one man is as good as another. Her philosophy of expediency strikes at the very heart of the consuming love, Juliet bears to Romeo. She blows a chill wind into a world which is all warmth and youth.

Nurse Compared to Other Characters

The Nurse has often been compared to Falstaff. But the Nurse lacks the imagination of the immortal character. Moreover, unlike Falstaff, when he is rejected, file carries mal cine spark of our sympathy. She has often been compared to Friar Laurence. The difference between the spiritual adviser of Romeo and the worldly confident of Juliet speaks for itself. She is, however, happily compared to Mercutio. Both are fountains of loquacity. Mercutio and the Nurse are simply youth and old age of the same type. He is aimed at the same goal she has nearly attained. He would have become the same sort of old man that she is old woman, just as she was undoubtedly the same sort of young girl that he is a young man. They both think of nothing but sex except when they are eating or quarrelling.

The Nurse in Romeo and Juliet is coarse, loving expedient, ignorant and fickle. She fails her ‘lady bird’ in her dire need. The vulgar, garrulous, warm-hearted Nurse has been wonderfully drawn by Shakespeare