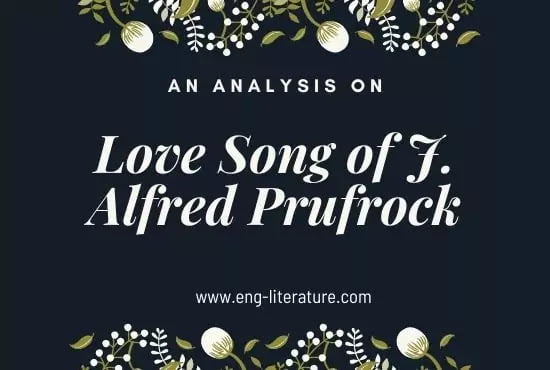 Analysis of The Love Song of J. Alfred Prufrock

Love Song of J. Alfred Prufrock is a poem about a middle-aged balding man who feels very insecure in life. It is a discussion on the tortured psyche of the typical modern man of Eliot’s days who is generally educated, neurotic and emotionally artificial. Prufrock seems to be speaking with a friend with whom he wishes to share his mental agony involved when he attempts to confess his love, bring the “moment to a crisis”. But he knows life too well to approach the lady openly. He presents his views about the dull, boring mediocre life he has been leading.

Prufrock himself is responsible for this boredom because he has a complex which makes him regret his own inadequacy, and his indecisive nature, which is frightened of making decisions. He is not spirited enough to take opportunity by the forelocks and consequently he is unable to take risks especially where women are concerned. His world is one that has no change or variety and hence monotonous. He tries to progress in life but his timid nature and fear of defeat prevents him from taking risks and getting into action.

The words ‘Love Song’, besides referring to a song on love, are also used to mean a narrative poem. “The Love Song” is no doubt a descriptive poem, dealing with a moment in the life of Prufrock, the character in the title. The poem also contains features of most love songs, like repetition, rhyme and rhythm. It focuses on a woman’s love for a man, which Prufrock is unable to secure in life.

Eliot has taken the name Prufrock, from a business sign in his hometown, the sign advertised for “William Prufrock Furniture Company.” The initial “J” and the name “Alfred” are his own invention. When he was a young adult, Eliot would occasionally sign his name as T. S. Eliot and perhaps on this basis he used “J. Alfred Prufrock.”

“The Love Song” is a dramatic monologue, presenting a moment in which the narrator or speaker analyses a topic and thereby reveals his personal views to an imaginary listener. The main purpose of a dramatic monologue is to provide information about the speaker and thus make a character study. This poem has also been called an “Interior Monologue”.

The setting of the plot is a bleak area in a smoky city, on a dull evening. The city could be St. Louis where Eliot spent his early years or somewhere in London where he moved in 1914. Actually the dull occasion could be witnessed in any city and Eliot just meant any dull corner in any city.

The protagonist, Alfred J. Prufrock, is the narrator in the poem and as for his character; he is a shy, nervous person lacking confidence. He is an over-cautious, balding middle-aged man, easily frightened. He guides his listener through several streets in the seedy part of a city. They pass through cheap hotels and restaurants, to a social meet where the woman he wishes to meet is conversing with others. He hesitates to go forward and become a part of the group because he is scared he may make a fool of himself. The companion of Prufrock has not been identified. The listener may also be his own inner self which induces him to act but fails to make him act.

Prufrock speaks of the night as “restless” in the sixth line and depicts the streets as “tedious arguments of insidious intent.” This proves that Prufrock is not comfortable in such an environment. He looks at the residence of his friends and that of himself as “one night cheap hotels and sawdust restaurants with oyster-shells.”

Within the first ten lines of the poem, Eliot has created the atmosphere of Prufrock’s restiveness and frustration. There are more images conveying his dissatisfaction with his residential area. Prufrock speaks of the “yellow fog” that “rubs its back upon the window panes”, the yellow smoke that rubs its muzzle on the window panes and the “soot that falls from chimneys.” There is a reference to smoke again when he describes the streets on which he is ambling. Such imagery portrays the residence area as gloomy and foggy.

The prominent feelings revealed in the poem are Prufrock’s agitation and his feelings of having frittered away all his time. The reader feels that the aging Prufrock, if given another chance, may tackle the problem differently. In lines 49-54, Prufrock avers,

Have known the evening, nothings, afternoons

I have measured out my life with coffee spoons

I know the voice dying with a dying fall

Beneath the music from a further room

So how should I presume?”

This passage gives the impression that Prufrock feels helpless and hopeless, as if life has nothing positive to offer. Similar declarations occur in the poem quite often. He avows that he was aware of “the eyes that fix you in a formulated phrase” and had seen the “arms that are braceleted and white and bare”.

Prufrock’s disappointment with life appears through his repeated statements of time. Such constant assertions emerge in lines 24-34, when he observes that there is time to “meet faces”, “murder and create”, have a “hundred indecisions” and a “hundred visions and revisions”. The purpose is to emphasize the fact that time seems ample only when proper use is made of it and Prufrock has not done so. In line 6l he asks “and how should I presume?” and repeats it in line 68 as “How should I then presume?” Soon comes in its trail “and how should I begin?”. So the poem seems to be about the possible consequences if one fails to make good use of time.

Prufrock becomes self conscious about his growing age and wants to sport a youthful look by wearing his trousers cuffed, a turned-up fold at the bottom of the pant leg. He wonders whether he should wear his hair parted behind like a daring young bohemian in that age. The next step would be to eat a fruit, the peach, while walking. And Prufrock has his own doubt whether he will have the courage to set aside his sense of decorum and his ideal of a gentleman and eat a fruit while walking. He should then walk to the beach swiftly, wearing his woolen clothes, to indulge in romantic dreams. This description would fit the typical fashionable youngster of his age.

The ageing Prufrock stands on the seashore with a yearning tinged with melancholy, watching the girls who don’t even notice him. His mood changes to one of a vision or a dream. The girls who ignored him appear to be mermaids now. They ride on the waves singing, as the mermaids do. They ride on the foam when the tempestuous wind blows giving a black and white picture.

In his reverie he goes to the world of mermaids with his partner. The use of “we” suggests this idea. He has enjoyed the company of the mermaids for a while. He felt that he had been welcomed and garlanded with sea-weeds. Soon the vision disappears with the call of this world in the voices of the drawing room. Grover Smith observes:

“His vision of them (mermaids) has been a delusion into whose waters he has sunk deeper and deeper until, recalled to the intolerable real world by human voices in the drawing room, he has walked and drowned in his subjective world of dreams, like the legendary sailors lulled to sleep by the mermaids or sirens and then dragged down to perish in the sea, Prufrock has wakened too late.”

He is not any better than a crab to face the challenges of the world. The poem ends in a note of disappointment. Prufrock is left all alone.

“We have lingered in the chambers of the sea

By sea-girls wreathed with seaweed red and brown

Till human voices wake us, and we drown.”