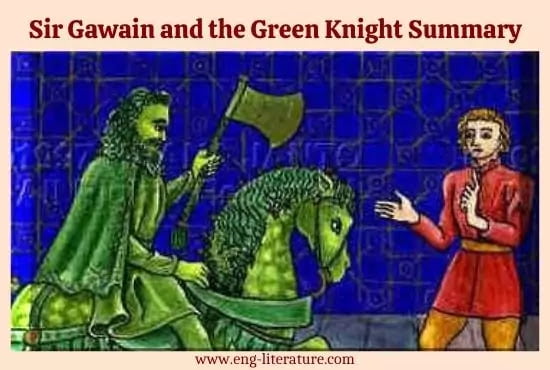 King Arthur was holding Christmas festival at Camelot. The festival continued for fifteen days. The Knights of the Round Table and the ladies were with the King. They celebrated the New Year at the Chapel. They made religious service and distributed gifts as tokens of affection and merriment. Amidst such rejoicings Arthur made a vow that he would not eat and drink until he had seen or heard some marvel or watched a heroic encounter. The first course of the feast was barely served when a tall knight, clad all in green, with green skin and hair, and green horse to match, rushed into the hall, he was a man of gigantic stature, surpassing all the knights. He carried no helmet, shield or spear. He had a holly bough in one hand, and a huge are in the other. The handle of the axe was also green. No respecter of persons, he saluted none, not even the King Arthur, who yielded to none in courtesy, saluted the Green Knight and invited him to accept his hospitality at the Court.

The Knight brusquely replied that he had heard much about the Round Table and, was therefore, anxious to have an encounter with one of the knights. He tauntingly invited any knight to strike him a blow with the axe, on condition that he would have to submit himself to return blow on the same day a year hence. The knights were astounded at the challenge, and yet remained silent The Green Knight looked around fiercely and stroked his green beard waiting for a reply. When everybody still remained speechless, he laughed derisively and said: “Is this the Round Table I have heard so much about? Is there none to accept my challenge?”

Arthur was very much excited. I there were none else, he must the challenge Sir Gawain leaped forward to vindicate the honour of the king and the Round Table. He accepted the change and seized the huge axe. The Green Knight leaned his neck and stooped down to receive the blow. Sir Gawain struck him, and the head was severed. The Green Knight did not die; he lifted the head rolling on the floor. Before leaving he adjured Sir Gawain meet him at the Green Chapel in a year fire. The headless Knight then leaped on his horse and rushed out of the hall. The horses ran so fast that sparks flew out of its hoofs.

Arthur’s vow was fulfilled. He had seen a marvelous thing, and, had therefore, no more objections to eating and drinking. The axe of the Green Knight was hung upon the wall as a sort of trophy.

On All Hallows Day Arthur made arrangements for a feast for Sir Gawain, about to undertake a perilous journey. Arthur and the other knights shed bitter tears, for they were afraid that Sir Gawain would not come back alive.

Sir Gawain left Camelot and rode along strange paths, climbed steep cliffs, crossed foamy streams, cascading down the mountain sides. The entire area was infested with wolves and serpents, wild animals, wild men and boars. The icicles dropped and made his helmet hoary. The bitter winter wind was raging. And yet Sir Gawain rode on with indomitable courage. He was almost at the end of his tether. At that crucial moment he prayed to Virgin Mary to offer him some shelter in the terrible cold, Virgin Mary must have listened to his prayer, for on the following day he found himself in a deep forest, where birds were crying piteously in cold. The Christmas festival was not far off. Sir Gawain prayed to Virgin Mary and thrice made signs of the Cross. And at once a miracle happened.

A castle was seen on a hill at a distance. Sir Gawain reached the splendid castle on Christmas Eve, but alas! the drawbridge was raised and the gates closed. He called aloud, and a porter opened the gate. As he stepped in, he was warmly received by the knights and squires. His horse was kept in the stable and well-groomed. The lord of the Castle came a little later and extended to Sir Gawain a hearty welcome. He introduced himself as Bertilak and escorted him to a cozy and comfortable chamber. Sir Gawain was placed near the fire-place, where he could warm himself. He was asked to wear rich robes. Various courses of food and fish were prepared for him. After dinner beer and delicious wine were served. Music and carols were furnished as a form of entertainment. The host then escorted Sir Gawain to the Chapel for service. They returned to the chamber, the young and beautiful wife of the host approached Sir Gawain. She seemed to be more beautiful than even Queen Guinevere. Her companion was an old crone, as hideous and ugly as the host’s wife was fair. A symbol of courtesy, Sir Gawain kissed the young lady and bowed to the old dame. In honour of the guest, feast and revelry continued for three days. On the third day most of the guests left, and Sir Gawain also expressed his desire to leave. It was St. John’s Day, and Sir Gawain Gas supposed to have reached the Green Chapel, two miles away from there. He must not fail in his appointment with the Green Knight. The host assured him that since the Green Chapel was very near, he could afford to stay a little longer.

It was arranged that the host would go out hunting on the following day, when Sir Gawain should keep the company of the hostess. The contact was that they should exchange in the evening whatever fortune they achieved during the day. The contract was twice renewed. The master of the castle hunted a deer. a boar, and a fox on the first day, second day, and third day respectively, which he gave to Sir Gawain in the evening. Sir Gawain was visited by the young lady every day, and declared love. He rejected her advances in the most courteous manner possible. He was forced to receive kisses from her from a sense of courtesy. He returned the kisses to the host according to the contract. On the third day the lady offered her a gold ring, which he refused to accept. When she offered her a silken girdle, saying that it would preserve him from death and wounds, he reluctantly accepted it. He kept it a grarded secret from his host, so that he could safely meet his mighty adversary at the Green Chapel.

On the New Year’s Day Sir Gawain woke up from his bed on a bleak and stormy morning. He put on his armor, beneath which he kept the silken girdle. He bade farewell to the host and his wife left for his destination. A servant, on the instruction of the host, escorted Sir Gawain for a while. The servant struck a note of warning that one should not go near the Green Chapel, because the Green Knight mercilessly killed anybody, who passed by. Not a coward, Sir Gawain told him sternly that he would be the last person to run away. He went alone, but looked in vain for the Green Chapel. At last amidst cliffs and hills Sir Gawain saw a channel with three entrances. But the place seemed so lonely and forsaken that it seemed to be haunted. It looked like a hollow green mound. “The devil may say mass at midnight here”–muttered Sir Gawain. Somebody from within granding an axe, and the grating sound could be heard. He shouted out: “Who is inside the Chapel?”

The Green Knight looked happy and bright. He turned to Sir Gawain and said:

“Don’t be angry or displeased with me. I have hit you only according to our agreement. I was harsh and ride to you because you have not behaved truly. On the fast night you gave me what you had received. On the second cay you received kisses from my wile, and you duly returned the kisses to me But in the third day although you received a silken girdle from my wife, woven by herself, you did not give it to me. It was I who persuaded my wife to tempt you. You are a faultless hero. You have rejected all the advances made by my wife. You have cured down her amorous wooing. But you could not overcome your fear of death. You thought that the silken girdle would preserve you from death and wounds. It was because of this momentary infidelity that you have received a slight wound.”

Sir Gawain was filled with remorse. He had failed miserably as a knight. He cursed himself for his cowardice, covetousness, and infidelity. He was not fit to be a knight any longer. He threw the green girdle to the Green Knight in shame. The Green Knight consoled him that he had atoned for his lapse by this wound. He invited Sir Gawain to come to his castle and be reconciled to his wife. Sir Gawain declined the invitation, but at the insistence of the Green Knight accepted the girdle. He would henceforth wear a sign of his sin.

In response to Sir Gawain’s enquiry, the Green Knight said that his name was Bernlac de Hautdesert. He was the host in the Castle. Arthur’s step-sister Morgan La Fay, the pupil of Merlin, the great wizard, had planned the whole thing to frighten Queen Guinevere. She was hostile to the Round Table. It was she who brought to the notice of Arthur the story of Lancelot’s adultery with Guinevere. She was banished from the court through the intrigues of Guinevere, and, therefore, developed deep hatred for the Queen. She built a Chapel in the mountain valley, from which no treacherous lover could escape. I was in this Chapel that she sought to let the chastity of Sir Gawain. The Green Knight told Sir Gawain that the old and ugly crone accompanying his wife was none other than Morgan La Fay for she could change her shape at will.

The Green Knight and Sir Gawain bade goodbye to each other. Sir Gawain returned to the court and narrated the story of his adventure and shame. Arthur and the Knights consoled him that his was venial slip, and there was nothing to be ashamed of. They even decided that henceforth each of the knights of the Round Table must wear a green girdle as a mark of respect to Sir Gawain.