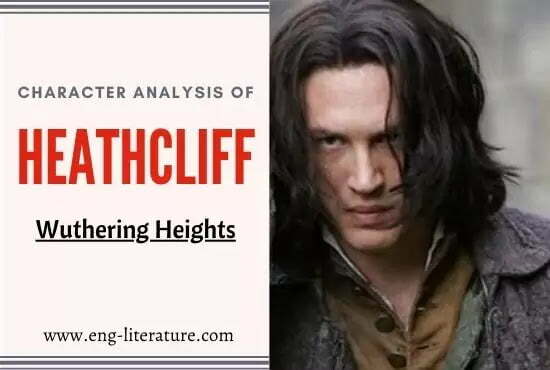 Heathcliff is the most significant character in Emily Bronte’s only novel Wuthering Heights. He bestrides the novel which is a story of his love, frustration, hatred, revengeful passion and his reconciliation with life. In a word, Heathcliff is the soul of the novel. He not only acts and suffers, but causes others to act and suffer. His strength permeates the story. His power for good and for evil shocks and surprises us. He is as powerful and amoral as the forces of nature with which he is often compared. He is both worldly and profoundly romantic. Love and hatred merge in him and both are extreme.

Heathcliff: A Child of the Storm

Wuthering Heights is the place of storm, whereas Thrushcross Grange is the appropriate home of the calm, the gentle Lintons. Heathcliff, a child of the storm, is brought to Wuthering Heights. He falls in love with Catherine, herself a child of storm, but the later developments in the novel arouse his ire and hatred against the Earnshaws and the Lintons. He is embittered by the harsh treatment of Hindley and disillusioned by what he considers the treachery of Catherine. The shock of her infidelity and Hindley’s ill-treatment of him disturb his nature and then he resolves to settle scores by crushing everyone who has stood in his way, everyone who has played to thwart his happiness.

He is not, therefore, a wicked man voluntarily yielding to his wicked impulses. He becomes destructive only when he is crossed. He is a natural force which has been frustrated of its natural outlet, so that it ultimately becomes devastating. As soon as he is “successful in taking vengeance, he has no longer the will to keep up his torturing.”

Heathcliff: Conscious of his Dignity

Heathcliff’s origins are unknown. This gives him not only the pathos orphan but an air of mystery that deepens into the suspicion that he is connected with the devil. He is brought to the Earnshaw family as an orphan by Mr. Earnshaw from Liverpool on his business-trip to that town. At that time Heathcliff was able to talk and walk. Although he is quite helpless, he strikes one as having a sharp understanding and keen sense of dignity as a human being. He does not consider himself inferior to anybody on the basis of material possessions or property. He considers it infra dig to raise himself up to the level of Edgar Linton and asserts before Cathy,

“I shall be as dirty as I please: and I like to be dirty, and I will be dirty.”

Heathcliff’s Position in the Earnshaw Household

Being brought to Wuthering Heights by Mr. Earnshaw and lodged with his family, Heathcliff is regarded by everyone in the house with abhorrence chiefly because of his colour. But the master, Mr. Earnshaw, is very fond of him and likes him even more than his son, Hindley. The result is that Hindley’s dislike of him is deepened. He ill-treats Heathcliff and thrashes him frequently. However, Heathcliff bears the ill-treatment with patience. His fortitude is boundless which enables him to endure suffering to any extent. He always keeps calm and uncomplaining. True to his name he is hard as ‘cliff’ all along. This habit endears him both to Mr. Earnshaw and his daughter Catherine.

Heathcliff: Strong but not Reckless

Heathcliff reacted to injustice and misfortune very strongly but never lost mental balance. After getting frustrated in love he did not become reckless like Hindley, nor submit to the darts of fortune like Edgar Linton. He was a conscious rebel. He knew that being penniless and lacking physical aid he had to fight his way through life single-handed. Thus he took stock of things at every step and devised a method after careful calculation. He did not care for either Hindley or Edgar even when he was without means. He persistently laboured, acquired courage and strength, and then showered blow after blow to make his enemies completely disarmed. In implementing his plans he acted with skill as may be seen from his contrivance of marriage with Isabella and later Edgar Linton’s marriage with Catherine, which evaporates in the presence of Heathcliff who is described as a ‘fierce, pitiless, wolfish man.’

Heathcliff: Not a Wicked Person

The skill with which he wrecks vengeance and the way he succeeds brings us into the dilemma as to whether he is a normal man or a monster. The question that Isabella put to Nelly is pertinent. Even Nelly Dean remains undecided if he was wholly a man or ‘a ghoul, or a vampire.’ As a matter of fact, Heathcliff was himself conscious that he would be considered a demon in human form. “I believe you think me a friend,” he said. He was inwardly wrestling with a bitter situation and was cruelly tortured, but he acted fiend-like in order to show that he had been wronged and that such wrongs are in human nature. He says to Ellen Dean:

“I have no pity! I have no pity! The more the worms writhe, the more I yearn to crush out their entrails ! It is a moral teething, and I grind with greater energy in proportion to the increase of pain.”

Throughout the novel, Heathcliff is marked by his evil nature. It is clear in his face as a boy and it is stressed when he returns a rich man. Money and the trappings of a gentleman can do nothing to remove what nature has given him. Emily Bronte is wonderfully subtle in her presentation of Heathcliff. Heathcliff is a thoroughly ambiguous and enigmatic character: as a child he has a wonderful sense of love and freedom but as a man he is a destroyer. If he is a destroyer, he is also a pain-racked soul. He becomes hideously worldly yet he has a poet’s vision of Catherine’s ghost. We are shown by his treatment of Isabella that he can abuse love in the most heartless fashion. But we cannot say that Heathcliff has no heart.

Emily Bronte is careful to present the evil and destructive side of Heathcliff. We see him getting the hopelessly alcoholic Hindley into his power and, far worse, his corruption of Hareton into little more than an animal. He is also preparing emotional torture for Isabella. The Heathcliff who holds the fading Catherine in his arms is profoundly evil for all that he inspires our compassion. We cannot measure Heathcliff by conventional standards. He is too awe-inspiring and too ambiguous.

We glimpse that for Heathcliff there is one absolute morality: the joy of unrestrained passion fulfilled. Cheated of this, conventional decency, Edgar’s decency, is woefully inadequate. After Catherine’s death the primitive, evil and profoundly romantic aspects of Heathcliff’s personality rise to the surface. When Nelly Dean tells him that Catherine has died:

“He dashed his head against the knotted trunk; and, lifting up his eyes, howled, not like a man, but like a savage beast getting goaded to death with knives and spears.”

He begs that he may be haunted by Catherine and in his frenzied state goes to her grave and begins to dig up her coffin. He desperately needs some sign of her continuing presence. While he is digging he believes that he feels Catherine’s ghost very close to him. His whole being throbs with remembered passion and pain from the tantalizing elusiveness of the ghost.

Heathcliff as a Lover

Heathcliff’s greatness as a boy and as a young man is his ability to love. This comes from his naturalness, his love of freedom, his lack of inhibition. He is cruelly betrayed. All that is most valuable, all that gives his life meaning, is sold for security, Heathcliff’s vast energies are denied joy and turn to evil. Evil, for Emily Bronte, is the will to destroy. Heathcliff is magnificent at this. He destroys Hindley and comes very close to destroying Cathy. In a wonderful chapter (Chapter 15) his presence brings about the collapse and death of a woman who has destroyed both of them. And we should be careful not to lay the whole blame at Heathcliff’s feet. When Catherine denied him, when she denied the love that gave meaning to her whole life, she too did wrong. Heathcliff was her soul and she knew he was. When she denied him she denied her soul. For that she suffers and dies.

It is Catherine’s choice in marriage of the conventional Edgar which destroys both her and Heathcliff. Heathcliff knows that she is dying as soon as he sees her, but he knows also that she committed emotional suicide long before. The thought of her death drives him almost to distraction. For a moment we forget his evil in the pathos of his account of his ruined life, his cheated passion and his desolate future:

“You teach me how cruel you’ve been-Cruel and false. Why did you despise me? Why did you betray your own heart, Cathy? I have not one word of comfort — you deserve this. You have killed yourself. Yes, you may kiss me and cry and wring out my kisses and tears. They’ll blight you – they’ll damn you. You loved me-then what right had you to leave me? What right- answer me for the poor fancy you felt for Linton? Because misery, and degradation, and death, and nothing that God or Satan could inflict would have parted us, you of your own will, did it. I have not broken your heart-you have broken it-and in breaking it, you have broken mine. So much the worse for me, that I am strong. Do I want to live? What kind of living will it be when you -oh, God I would you like to live with your soul in the grave?”

After Cathy’s death Heathcliff‘s whole life is concentrated on the suffering caused by his loss, and on the violence of his desire to get her back, for she is his soul, and without her he grovels in an abyss of nothingness. Heathcliff spends so much of his time in an elaborate attempt to destroy Thruschross Grange and Wuthering Heights, with all their inhabitants. He takes delight in torturing Hindley, Isabella, Hareton, the second Cathy, his son Linton. He enters on a violent career of sadistic destruction. No other figure in English literature takes so much pleasure in causing pain to others.