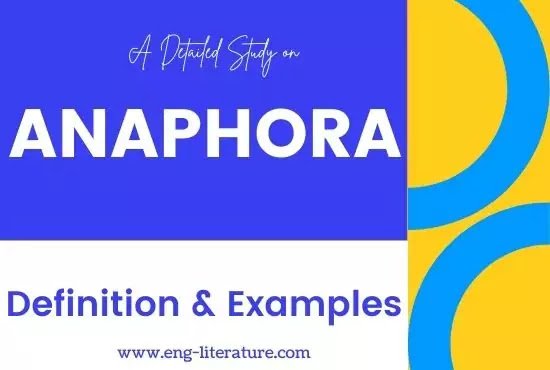 Anaphora is a Greek term meaning ‘reference’ or ‘carrying back’.

Anaphora is a literary device in which the same expression is repeated at the beginning of several successive lines, clauses, or sentences. Anaphora is figures of speech used by the writers or orators in order to convey, emphasize and reinforce meaning.

Anaphora is also known as Epanaphora. It may be recalled that a kind of melody is produced by such repetitions.

Where youth grows pale, and spectre thin and dies.

Where but to think is to be full of sorrow.”

(‘Ode to a Nightingale’, John Keats)

This is a case of the figure, anaphora.

Here the word ‘where’ is reiterated at the beginning of all the lines.

Anaphora in Daily Use Examples

Charles Dickens used anaphora in the beginning of his famous novel A Tale of Two Cities:

“Lost wealth may be replaced by industry, lost knowledge by study, lost health by temperance or medicine, but lost time is gone forever.”

Examples of Anaphora in Poetry

Theirs not to reason why,

Theirs but to do and die.

What I kept I lost,

What I gave I have.

Ring out the narrowing lust of gold;

Ring out the thousand wars of old,

Ring in the thousand years of peace.

4.There is a pleasure in the pathless woods,

There is a rapture on the lonely shore,

There is society where none intrudes.

And she forgot the blue above the trees,

And she forgot the dells where waters run,

And she forgot the chilly autumn breeze

And call her sweet as if in irony;

And call her hard and cold, which seemed a truth.

Examples of Anaphora in Public Speaking

Few great legends used anaphora with deft excellency and proved themselves as good orator by catching the attention of the public. Here are a few best anaphoric speeches:

I have a dream that my four little children will one day live in a nation where they will not be judged by the color of their skin but by the content of their character. I have a dream today.

In the movie The Great Dictator, Charlie Chaplin’s anaphoric speech is charged with emotional intensity and passion:

Anaphora gives emphasis to speech or writing. The repetition of words magnetizes the public or reader’s attention within a moment.

Anaphora heightens the emotional intensity of the readers or audiences straightaway.

Judicious use of anaphora in speech or writing creates music and rhythm in a very effective way.