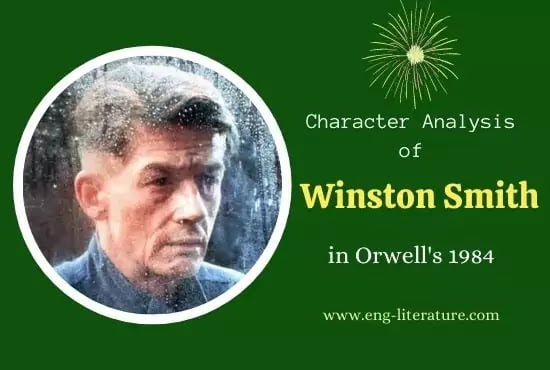 Winston Smith, like all Orwell’s central characters, is completely unheroic. He is thirty-nine, a smallish frail figure, and he had a varicose ulcer. He works in the Ministry of Truth, which is the Double think title of the Ministry of Propaganda. His job is to alter news items in old newspapers so that no one will ever know that the Party line has been changed or that the current version of historical fact is a ‘rectification.

Winston dislikes his job and all it stands for. He has heard that there is a secret Brotherhood dedicated to the destruction of the Party and he wonders if he can discover whether it really exists. Meantime, he does a desperate thing. He begins a diary. Every action can be observed through screens in every room and the action of writing so personal and individual an exercise is a most serious crime. Writing as an imaginative craft has disappeared. The novels, popular songs and pornography required for the proles are turned out by machinery in the Fiction Department of his Ministry. (It may be pertinent to quote here Mr. Huxley’s remark in his Preface to Brave New World: ‘A book about the future can interest us only if its prophecies look as though they might conceivably come true.)

The diary is a dismal failure but it is a symbol of individuality struggling for development. Another is a love of beautiful bric-a-brac. Another is an interest in nursery rhymes, and the lines of ‘Oranges and Lemons‘ are used right through like a signature tune. At every crisis in his downfall another line of the forgotten rhyme is restored to his memory. The final symbol of his desire for individuality is his love affair with Julia. Making love is important to Winston as an act of political defiance. The Party insisted on chastity, which nourished hysteria and kept down individuality. Julia is the eternal minx, bent on having what she wants, without moral or social inhibitions and with an instinct for the hypocrisies which will carry her through.

Julia arranges clandestine meetings to evade the telescreens, microphones and helicopters of the Thought Police. Like the two earlier Londoners in keep the Aspidistra Flying, they succeed in escaping into the country to make love. Later, they hire a room in a proletarian quarter. There their love deepens. Winston’s love for Julia awakes him to himself; it puts him in touch with his past, his own selfishness, and his mother’s generous love. This awakening is a healing thing, as we see when Winston’s ulcer on his leg heals up; all that is left is a brown stain on the skin. The reader will see how Winston’s obsession with doublethink, the Party’s technique for controlling reality, especially the memory of what has happened, relates to Winston’s discovery of a fuller humanity through love.

Love provokes memory of love, which makes a fuller, more unified man, which brings a dignity back into life, the dignity of living with an understanding of good and evil, the dignity to choose based on past experience. Doublethink gets rid of choice, would even get rid of good and evil altogether. Indeed Newspeak (the language of doublethink) will eventually do away with the word ‘evil’, and other complicated words, which involve decision and choice. The words not being there, it will be impossible to think dangerous thoughts.

Winston wants to recall his humanity, the good and the bad, and be himself. This he does through love. He and Julia vow to stay true to love no matter what happens. They are caught. The room, it turns out, is a trap, even a telescreen behind the old engraving. They are arrested and taken separately to the Ministry of Love.

Winston Smith was born in the mid-forties. When he was about ten his family disappeared in one of the periodic purges, and he is half aware that in some way his mother and sister had sacrificed themselves for his sage. By 1984 Smith is thirty-nine: small, frail, suffering from a varicose ulcer on his leg and from early-morning coughing fits, living in the collapsing Victory Mansions. He is a citizen of an England which has become Airstrip one, a province of a super-state known as Oceania. He lives in a London on which fall twenty or thirty rocket bombs a week. He is an Outer Party Member, working a sixty-hour week in the Ministry of Truth at the rectification of records and all documents of any conceivable ideological significance, in order to make them consistent with the changing Party line.

Winston Smith keeps a diary in which his private thoughts and feelings are recorded. He writes it in a corner of his room that by accident of construction is out of range of the telescreen. He rebels against the Party. He loves Julia. In the end he is imprisoned and beaten until all resistance goes out of him. He betrays Julia, who has already betrayed him. Cured, he returns to the outside world, even to job better paid than the one he had before. He is anxious about impending news from the battle front. He has met Julia but they are completely meaningless to one another. When the news does come over the telescreen, it is of a tremendous victory. In his joy at the Party’s triumph, Smith looks again at the nearby picture of Big Brother.

Winston Smith wins the victory over self

Winston gazed up at the enormous face. Forty years it had taken him to learn what kind of smile was hidden beneath the dark moustache. O cruel, needless misunderstanding! O stubborn, self-willed exile from the loving breast! Two gin-scented tears trickled down the sides of his nose. But it was all right, everything was all right, the struggle was finished. He had won the victory over himself. Winston always knew his attempt at self-realization would bring him to the torture chambers of the Ministry of Love, O’Brien, who is to be his torturer, who is to save him from himself, points this out soon after he arrives : ‘You knew this, Winston,’ he says: ‘don’t deceive yourself. You did know it-you have always known it.’ (p. 192).