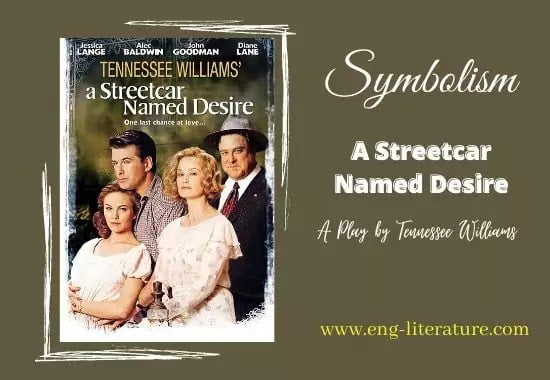 Symbolism in A Streetcar Named Desire

“Life overwhelmed him with its excesses … his work revealed an acute social consciousness, and a growing development toward the highly symbolic writing that would become one of his distinguishing trademark.”

Williams turned drama into a work of art, more lasting for the deeply probing power which it attained through its use of symbolism. In A Streetcar Named Desire symbolism becomes overwhelmingly powerful.

The play can be read at more than one level and readers may feel free to interpret it as representing a clash between culture (Blanche) and a rude power/ animality (Stanley), domesticity and free-wheeling individual spirit, as picture of a helpless insecure woman brutalized by masculine power, or about a sensitive lyrical girl lost in the jagged terrain of a valueless anarchic society. The very open-endedness of all these factors suggests the symbolic potential of the chief characters.

On the overt plain we cannot miss the symbolism of primary devices such as the single bulb covered with a paper shade to which Blanche feels deep aversion; the roar of a railway train as it cuts through the droning speech of Blanche, her unnerving fright of sharp glaring light symbolically evokes that side of her character which is vulnerable, ready to crack at the slightest strain that her own psycho-conflicts generate. Throughout the play this terror of light runs like a streak of unavoidable presence which she cannot will away. Tennessee Williams uses expressions like “lurid nocturnal brilliance” (Scene 3), “bedroom is relatively dim with only the light that spills between the posters and though the window on the street” (Scene 3) which create an atmosphere of emotionally variable moods. Such method is ostensibly seen in The Glass Menagerie.

Blanche is a woman who remains half in dark and half in light. What she hides must be brought to light by Stella and Mitchel, but she resists with her full might. Her gravest tragedy is symbolized when “He crosses to the dressing table and seize the paper lantern tearing it off the light-bulb, and extends it toward her. She cries out as if the lantern was herself.”

In the famous rape scene the author makes use of light in a suggestive manner, bringing out the pathetic reduction of the girl to the most humiliating moment of her life.

A little later another stage direction in parenthesis reads, “The shadows and lurid reflections move sinuously as flames along the wall spaces.” A bestial quality in Stanley, hidden deep in his character to which Blanche had hinted in her conversation with Stella suddenly spills over uncontrollably which is accentuated by this artistic use of light and shadow play and inhuman voices like cries in a jungle”.

The sound of locomotive is also very meaningfully used, as we have seen in earlier passage. The sound of it turns into the roar of an approaching locomotive. Blanche crouches, pressing her fists into her ears until it has gone by. The symbol of the locomotive is one of the most articulate and novel devices used in the play, often associated with the luckless girl’s moments of tragic dive into further rupture.

Symbol of Music or Symbol of Blue Piano

Like the use of light, music also has been Tennessee Williams’ favourite device, setting the mood and atmosphere. ‘Blue Piano music continues like a theme music. According to the author himself, “This ‘blue piano expresses the spirit of life which goes on here.” In Scene One when Stella and Blanche are discussing the loss of Belle Reve “The music of the ‘blue piano’ grows louder” which accentuate the savagery of the entire discussion between the two symbolically lends an edge of irony to this dialogue.

Another piece of music associated with Blanche’s memory of the painful past is ‘Varsouviana’ which seems to vivify the dark and sinister past. It is a piece of music which was playing when Allan, her young husband shot himself in the hotel. With the memory of the past it is played out as a symbol of Blanche’s inability to unscramble her present from her past.

Other pieces of music which the playwright uses in this play is ‘polka’, ‘the trumpet and drums and Blanche’s own singing a tune that comes out from the bathroom in her self-absorbed state of mental elation and sense of well-being. Blanche in bathroom, therefore, becomes an expressive symbol in this play.

Originally when Tennessee Williams conceived of the play he gave it the name The Poker Night which suggests that apparently he regarded the game of cards as centrally significant. A considerable amount of criticism has been written about the symbolic importance of this game. It functions as a framework with people who are more or less on the side lines present all the time while the central drama is enacted, and stepping into it once in a while to remind us of the broad social presence. Their hobby of card playing suggests the social rank to which the Kowalskis belong, rough sort of people who speak and behave not in the refined manner, yet quite closely concerned with the personal life of the three major character.

Does the game of cards, poker have a particular symbolic significance in the general nature of Blanche’s personal crisis? It is a game of chance and chance is what Blanche’s life is based upon. She takes risks all along – her job in Belle Reve and its loss, the loss of family property itself, her chancy wedding, Allan’s accidental death, her taking of big chance of her sister’s home when as it would happen she meets a man, who hastens her to ultimate ruin, her dependence on chance for achieving happiness in life when she meets Mitch but is rejected which was also a chance.

The paper lantern over the light bulb represents Blanche’s attempt to mask both her sordid past and her present appearance. The lantern diffuses the stark light, but it’s only a temporary solution that can be ripped off at any moment. Mitch hangs up the lantern, and Blanche is able to maintain her pose of the naïve Southern belle with him, but it is only a facade.

A paper world cloaking reality also appears in the song “Paper Moon.” While Stanley tells Stella about Blanche’s sordid history, Blanche sings this saccharine popular song about a paper world that becomes a reality through love. Blanche feigns modesty and a coquettish nature, but behind the veneer, she hides a much darker past.

The title of the play is equally loaded with symbolic meaning. “Streetcar’ is the vehicle that carries one to destination as well as away from a point of embarkation: “the mythic archetype of the voyage.” In Scene I when Blanche alights at her sister’s house she meets Eunice who asks her,

“what’s the matter, honey? Are you lost?” to which Blanche replies. “with faintly hysterical humour”, “They told me to take a streetcar named Desire, and then transfer to one called cemeteries and ride six blocks and get off at-Elysian Fields !”

It is an interesting statement, the names connoting both the real things and the symbolically suggestive meanings. There is a lot of concealed sense of the words Desire, Cemeteries, and Elysian Fields which gain deeper meaning later on. Desire in the context of Blanche’s perpetual quest for happiness, peace and stability fits into the meaning of vehicle which is on its journey this desire is never fulfilled.

Cemeteries evokes the idea of death which she looked at close range with her elders passing away agonising at Belle Reve, her husband blowing his brains with a pistol shot, and the broader sense of her own once ebullient spirit getting killed under brutal suffocating air of her sister’s home. Elysian Fields is paradoxically the name of the place where they live, conjuring up all the impressions of an idealized concept of dwellings one finds one’s dreams realized. It is a mythical allusion to Book VI of Virgil’s  Aeneid. According to Roman mythology, Elysium (or Elysian Fields) was a part of the underworld and a place of reward for the virtuous dead. These names are mockingly ironical accentuate the heroine’s tragic situation and her continual decline abysmal darkness of personal wilderness all the more sharply.

Like Eugene O’Neill’s Emperor Jones and Arthur Miller’s Death of A Salesman, Williams’s plays explore ways of using the stage to depict the interior life and memories of a character.

Williams had used various symbolic markers which not only help the audience get a better view of the inner world of the character’s mind, they also serve to introduce at significance places appropriate dramatic intensity and thus create sufficient interest. According to a critic

“Opening with her arrival in the land of life and death, the play chronicles the human soul’s past and present excursions in the only vehicle that fate provides her, the rattle-trap Street Car of the body, the play closes with the soul’s departure for incarnation in another asylum, another kind of living death.”