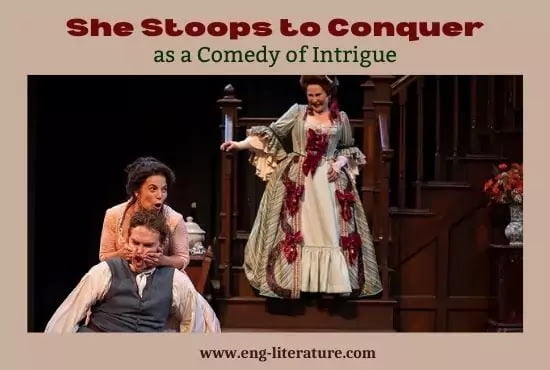 She Stoops to Conquer as a Comedy of Intrigue

Intrigue of Tony against Marlow and Hastings

The play begins with the intrigue of Tony against Marlow and Hastings which sets the action of the play in motion. Marlow and his friend Hastings come to the Three Pigeons, an old alehouse where Tony frequents, by losing their way to Mr. Hardcastle’s house. At that time, Tony misdirects them in order to take revenge on Mr. Hardcastle, his stepfather, who always finds faults with him calls him young dog and considers him to a worthless boy. So, Tony misdirects them to the Hardcastle home as to an inn and Mr. Hardcastle as to an innkeeper. This intrigue contributes to a lot to the comic impression of the play. Because of this intrigue, Marlow mistakes his future father-in-law for an innkeeper and orders him for punch. They talk at cross-purposes which amuse us most.

Intrigue of Hastings and Miss Neville against Marlow

Hastings and Miss Neville intrigue against Marlow by not telling him that the house to which they have come is Mr. Hardcastles and the owner of the house is not an innkeeper.

Intrigue of Miss Hardcastle against Marlow

Miss Hardcastle’s intrigues against Marlow constitute the central episode of the play and bring about the happy ending of the main plot. In their first meeting, Marlow doesn’t look at her face. So, she decides to present herself as a barmaid In order to win his heart. When she appears before him in plain dress, Marlow mistakes her for a barmaid, looks at her face and tries to kiss her. Thus, she captivates his heart by stooping to the level of a barmaid. She plays another trick upon him. When he asks her if she is a barmaid, she tells him that she is a poor relation of the family. Her tricks upon him are charged with irony. Actually their conversation contributes to the comic impression of the play. We are at the height of comedy when we see him go down on his knees praying for the hand of the girl who is eager to marry him.

Intrigue of Tony and Miss Neville against Mrs. Hardcastle

Intrigue of Tony against his mother

Tony intrigues against his mother in order to help Hastings and Miss Neville to be united in wedlock. He steals Miss Neville’s casket of jewels from his mothers almirah and hand it over to Hastings to assist the elopement of Hastings and Miss Neville. But the casket of jewels go back to Mrs. Hardcastle for the idiocy of Marlowe and Hastings and then the plan of elopement is revealed to her. When she sends Miss Neville to aunt Pedigree’s house as a punishment, Tony harasses his mother by taking her round and round the house in a stage coach through the muddy paths, sloughs etc., and places her in the horse pond. She comes out of the pond being drenched. She is so frightened that when she mistakes her own husband for a highwayman and kneels down at his feet to spare her son’s life. This scene is highly comical.

Tony is himself intrigued by Mrs. Hardcastle, his mother and Mr. Hardcastle, his stepfather. They keep him under the illusion that he has not yet come to of age though he attained maturity three months earlier. When this intrigue is exposed, Tony declares that Miss Neville is free to marry anybody she likes. This declaration entitles her to marry Hastings with her fortune. As a result, the play ends happily and it makes for the totality of comic impression in the play.