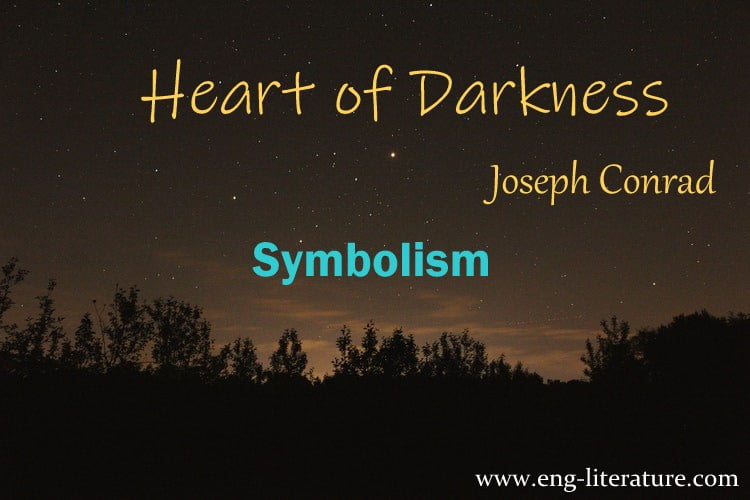 Symbolism in Heart of Darkness

Heart of Darkness is replete with symbols. In Heart of Darkness every person and everything means more than what we are likely to find on a superficial level. The novel is based on both the historical facts and the facts of Conrad’s own experiences. But Conrad has tried to convey the deeper truths underlying both facts. Through the novel he certainly tries to reveal obscure truth which lies underneath.

Almost all characters in Heart of Darkness have some symbolic significance. The central figure in the novel, Mr. Kurtz is highly symbolic. First, he symbolises the greed and the commercial mentality of the white people of the western countries. Mr. Kurtz’s desire to collect the maximum quantity of ivory shows the exploitation of the backward people by the white colonizers. Second, he symbolizes the white man’s excessive love  of power. Third, the change which comes in him during his stay, among the savages, symbolizes the influence of barbarism upon a civilized man.

Mr. Kurtz becomes savage because of his prolonged stay in the dark continent symbolizes the irresistible influence of barbarism upon a civilized man who is isolated from civilized society, It shows that the primitive evil instincts continue to exist in every human being, no matter how civilized he may have become. These primitive instincts lie dominant within him; and they would rise in a favourable environment and then would govern his whole conduct.

The role of Marlow is highly symbolic. Firstly, he symbolizes the spirit of adventure and a love of knowledge. His boyhood dream of travelling to Congo and sailing upon the river Congo is translated into reality only because of his inborn spirit of adventure. He also symbolises philosophical approach to human life by his constant brooding and meditation upon what he sees.

Similarly, the characters too carry symbolic significance. The Manager of the Central Station symbolizes spiritual emptiness. He is unable to inspire respect or love or fear because he is spiritually barren. Though he has no originality and no solid ideas in his head yet he can do his manager’s work like a machine. Then there is the brick-maker who acts as the manager’s spy and informer. Marlow calls him as a “papier-mache MephistopheIes” means cunning and trickery. Then there are a number of white agents who keep loitering around the Central Station because they have nothing to do. Marlow calls them “faithless pilgrims”.

The knitting women in the beginning of the novel symbolises the Fate, who determine the future of every human being on the earth as they seem to know all about everybody who visits the Company’s officer. The majestic-looking native woman, who appears on the river-bank when Mr. Kurtz was being taken away, symbolizes a woman’s strong devotion and loyalty to her lord. Mr. Kurtz’s fiancée, Intended, also symbolizes loyalty, she symbolizes the hold of an illusion upon a woman’s mind. The Russian, who resembles a harlequin, symbolizes inquisitiveness, loyalty and fidelity.

Besides characters there are also other symbolic elements in the novel. Ivory symbolizes the white men’s greed. The French warship firing aimlessly into the forest, and the rock being blasted with gunpowder without any purpose, symbolize the sense of futility and aimlessness. Then the sight of the starved native symbolizes the sufferings of the natives who do not receive any sympathy from the white. Then half a dozen native men chained to one another, and each wearing an iron collar round his neck symbolizes the white man’s sway over the backward people. In short, Conrad has effectively conveyed exploitation of the people of Congo through Symbolic descriptions.

The chain-gang with half a dozen native men chained to one another, and each wearing an iron collar round his neck, symbolize the white man’s sway over the ignorant backward people without any concern for their welfare.

Fog is a sort of corollary to darkness. Fog not only obscures but distorts: it gives one just enough information to begin making decisions but no way to judge the accuracy of that information, which often ends up being wrong. Marlow’s steamer is caught in the fog, meaning that he has no idea where he’s going and no idea whether peril or open water lies ahead.

Furthermore the description of the natural scenery also serves a symbolic purpose. The wild and awe-inspiring scenery makes an observer think that he has gone back to the beginning of the world when the huge trees were kings. The silence of the woods and the abundance of trees symbolises mystery and honor. In sharp contrast to the wild imagery, the city of Brussels symbolizes the corruption of the white man’s civilization. The city of Brussels seems to Marlow to be something outwardly  and pleasant but inwardly rotten. Brussels thus symbolizes the degeneracy of the white man.

Finally, Marlow’s journey into Congo is symbolic it is a journey into Marlow’s sub-conscious mind or a journey into the subconscious mind of making in general. According to a critic it is a psychological-anthropological journey. The very title of the novel is also symbolic. The literal meaning of the phrase “heart of darkness” is the inmost region of the dry country known as Congo; but symbolically it means the inmost region of a man’s mind or soul. So the incursion into the heart of darkness also means a descent by Marlow into the depths of his own soul. As Marlow stands for Conrad himself so the novel also becomes a kind of the exploration of Conrad’s own mind during his visit to Congo.

2 thoughts on “Symbolism in Heart of Darkness by Joseph Conrad”