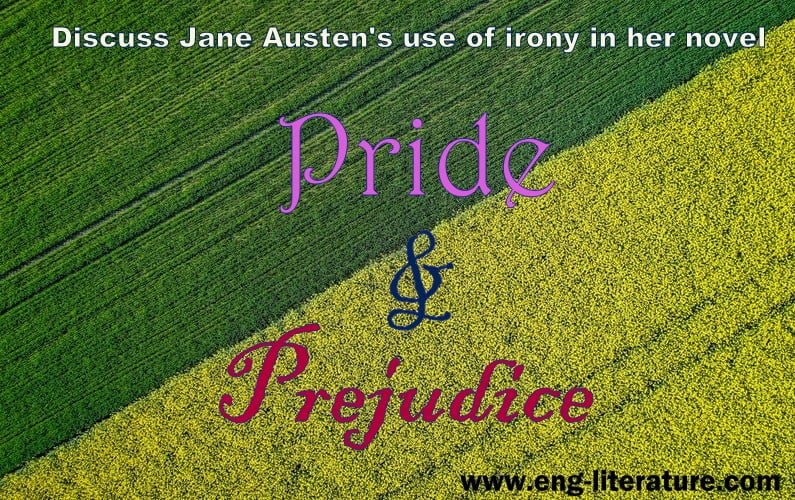 Irony in Pride and Prejudice

Use of word with humorous or satirical intention, as a result of which the meaning is the exact opposite of what actually said, is called irony. According to Prof. Chevalier,

“the basic feature of every irony is a contrast between a reality and an appearance.”

Irony is Jane Austen’s forte, it is very soul of her novels. It has been pointed out that it never imposes itself, it is never absent from more than a paragraph. Jane Austen’s themes are instructive. Pride and Prejudice illustrates the dangers of excessive pride and unrestrained prejudice. Emma deals with the dangers of excessive self- confidence and Persuasion with those of over persuasion. In Sense and Sensibility, it is true that Jane Austen makes sense triumph and sensibility is depressed.

As one examines Pride and Prejudice, one is struck with the fact of the ironic significance that pride leads to prejudice and prejudice invites pride and both have their corresponding virtues bound up within them. Each has its virtues and each has its defects. They are contradictory and the supreme irony is that intricacy, which is much deeper, carries with it grave dangers unknown to simplicity. This type of thematic irony runs through all of Jane Austen’s novel.

In “Pride and Prejudice” there is much irony of situation too, which provides a twist to the story. Mr. Darcy remarks about Elizabeth that:

“tolerable but not handsome enough to tempt me…”

We relish the ironical flavor of this statement much later when we reflect that the woman who was not handsome enough to dance with was really good enough to marry. He removes Bingley from Netherfield because he considers it imprudent to forge a marriage alliance with the Bennet Family, but himself ends up marrying the second Bennet sister. Collins proposes to Elizabeth when her heart is full of Wickham and Darcy proposes to her exactly at the moment when she hates him most. Elizabeth tells Mr. Collins that she is not the type to reject the first proposal and accept the second but does exactly this when Darcy proposes a second time.

The departure of the militia from Meryton was expected to put an end to Lydia’s flirtations, it brings about her elopement. The Lydia-Wickham episode may seem like an insurmountable barrier between Elizabeth and Darcy, but is actually instrumental in bringing them together. Lady Catherine, attempting to prevent their marriage only succeeds in hastening it.

Irony in character is even more prominent than irony of situation. It is ironical that Elizabeth who prides herself on her perception is quite blinded by her own prejudices and errs badly in judging intricate characters. Wickham appears suave and charming but is ironically unprincipled rouge. Darcy appears proud and haughty but ironically proves to be a true gentleman when he gets Wickham to marry Lydia by paying him. The Bingley Sisters hate the Bennets for their vulgarity but are themselves vulgar in their behaviour. Darcy is also critical of the ill-bred Bennet Family but ironically his Aunt Catherine is equally vulgar and ill-bed. Thus, the novel abounds in irony of characters.

The narrative of “Pride and Prejudice” too has an ironic tone which contributes much verbal irony. Jane Austen’s ironic tone is established in the very first sentence of the novel.

“It is a truth universally acknowledged that a single man in possession of a good fortune must be in want of a wife.”

As Dorothy Van Ghent remark, what we read in it is opposite – a single woman must be in want – of a man with a good fortune. There is much verbal irony in the witty utterances of Mrs. Bennet. He tells Elizabeth:

“Let Wickham be your man. He is pleasant fellow and would jilt you creditable …”

In the words ‘pleasant fellow’ is hidden a dramatic irony at the expense of Mr. Bennet, for Wickham is destined to make a considerable dent in Mr. Bennet’s complacency.

Jane Austen did not show any cynicism or bitterness in using her irony to draw satirical portraits of whims and follies. Rather her irony can be termed comic. It implies on her side an acknowledgement of what is wrong with people and society. It is interesting to note that ironically, in Pride and Prejudice, it is the villainous character Wickham and lady Catherine – who are responsible for uniting Elizabeth and Darcy.

Austen uses irony to shake her major figures of their self-deception and to expose the hypocrisy and pretentiousness, absurdity and insanity of some of her minor figures. It is definitely possible to deduce from her works a scheme of moral values. Andrew H. Wright rightly points out that irony in her hands is

‘the instrument of a moral vision and not a technique of rejection’.

2 thoughts on “Irony in Pride and Prejudice by Jane Austen”