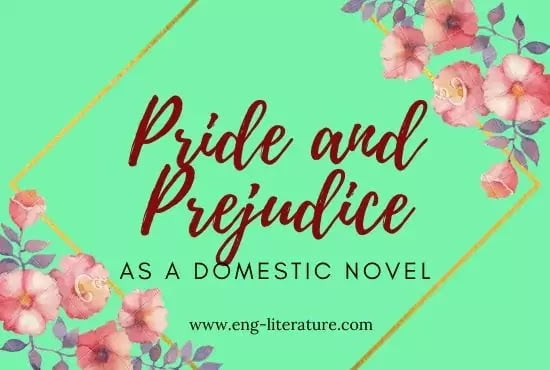 Pride and Prejudice as a Domestic Novel

Of all the truisms about Jane Austen, the favourite for the past centuries is that a little interest is taken by her in the broad concerns of national life. It is a proposition which seems quite obvious to the readers of Pride and Prejudice or any other of Austen’s works. Winston Churchill exclaims,

“What calm lives they had, those people! No worries about the French Revolution or the Napoleonic Wars!” Chesterton writes “a story as domestic as a diary in the intervals of pies and puddings.”

Criticism of this kind indicates the essentially narrow focus of an Austen novel in which the novelist seems to pen activities about her neighbours while the dynasts were fearing the world to pieces and consigning millions to their paves.

Admittedly Jane Austen stands aside from the ideological convulsions that accompanied and followed the French Revolution. But detachment is not the quality that evidently strikes the critic cited above. Her detachment from the larger world guarantees a brilliant narrowness of focus upon a domestic world which in Pride and Prejudice centres on marriage and money.

But the marriage and money theme operates on many levels. It is even more baffling when Austen’s heroine comes to marry. The fact remains that Elizabeth does make of what from the materialistic point of view is a glorious match the most glorious of any Austen’s heroines and that its material splendour is pointedly put forward. The question that naturally arises is: what is the connection between the heroine’s personal progress and the minor characters’ husband – hunting this novel as a conservative novel and marriage should be and is the fulfilment of personal moral quest. This applies to Elizabeth more than to any other characters. Personals matters and personal attitudes are made the themes of social interaction in the novel on the most important plane, they involve moral implication and often assume religious overtone.

In fact the subject of Pride and Prejudice is what the little indicates: the sin of pride obnoxious to the Christian, which takes the form of complacency about the self and correspondingly borrow a lower opinion or prejudice about others. Darcy’s pride is humbled midway through the novel when he proposes to Elizabeth and to his astonishment is rejected the lesson he has to learn is that he has to earn his right to consideration by respect for others.

Elizabeth’s corresponding sin is more subtle and her enlightenment requires the space for the whole book. She seems unconscious that she suffers from pride at all. Quick of observation encouraged by her father’s example to take delight in the follies and vanities of others, she sees everyone’s mistakes but her own. The false assurance of friendship from Miss Bingley and Mrs. Hurst do not deceive her. She already has too low an opinion of them. She sees and enjoys the follies of Mr. Collins. But she also quite unreasonably persists in thinking ill of Darcy, and just as perversely, in thinking well of Wickham, even when the evidence that he is a fortune-hunter is placed before her.

In Jane Austen’s novels the maneuvering by which a man presents himself to a woman and her parents as a possible husband often comes before any signs of love. Charlotte Lucas in Pride and Prejudice offers the most tough-minded and unsentimental analysis, counseling that Jane Bennet should secure her rich husband first and think about love only after they are married. ‘Happiness in marriage is entirely a matter of chance’.

The marriage of a young woman is the protocol of Jane Austen’s time. Lydia Bennet marries at 16 and her mother talks of her sister Jane attracting the attentions of a well-qualified suitor at the age of 15. At a certain age, somewhere between 15 and 19, a young woman was said to be ‘out’. That meant that she could be courted. . In 1802, aged almost 27, Jane Austen herself accepted a proposal of marriage from Harris Bigg-Wither, the brother of family friends, only to change her mind by the next morning.

The marriage choices that Jane Austen’s characters make are absolute. Mr. Bennet, Austen tells us, married Mrs. Bennet because he was captivated by youth and beauty, but then discovers her true nature. ‘Respect, esteem, and confidence had vanished for ever; and all his views of domestic happiness were overthrown.’

Questions of status and class are a major preoccupation of Jane Austen’s characters, and of the novels themselves. Professor John Mullan considers both the importance of social status and its satirical potential. There is certainly no association in her novels between high rank and any great virtue or ability. Aristocrats are at best buffoons, at worst paragons of arrogance.

There has been a curious tendencies to take ‘pride’ and ‘prejudice’ to be polar qualities, like ‘sense’ and ‘sensibility’ where as in the course of the novel we generally see them associated within the same character. The proud lady Catherine is certainly prejudiced and the prejudiced Elizabeth can be accused of pride. Caroline Bingley declared that her manners are “a mixture of pride and impertinence.”

Austen’s domestic world is thus not quite simple in which characters are personified abstractions – like ‘pride’ and ‘prejudice’, ‘insolence’ and ‘folly’, ‘irresponsibility’ and ‘jealousy’. Narrow and domestic though the world is, it is nevertheless quite rich in suggestion and implication. To apply such term as ‘narrow’ or ‘domestic’ is to ignore the richness and complexity of Pride and Prejudice.

4 thoughts on “Pride and Prejudice as a Domestic Novel”