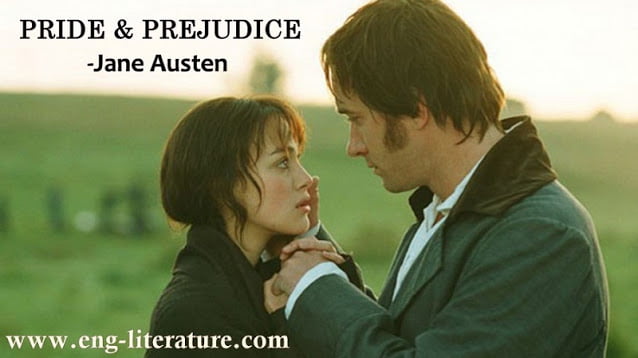 Significance of the Title Pride and Prejudice

Jane Austen, with her powerful artistic touch pens down in Pride & Prejudice her concern for the then society drunk with reputation and appearance. First written in 1797 under the title First Impressions, it was later revised and published as Pride and Prejudice in 1813.

“It is a truth universally acknowledged that a single man in possession of a good fortune must be in want of a wife.”

“The whole unfortunate business was the result of Pride and Prejudice.”

The two pivotal characters are both guilty of pride and prejudice and must learn the errors of their ways before they can live “happily ever after”. Elizabeth Bennet, Austen’s heroine, believes herself to be a very shrewd judge of character, but her pride allows herself to fall victim of her own set of prejudices. On the other hand, Darcy is proud of his refinement and superiority of social standing. This leads him to a general prejudice for all those below his social status. The novel is about the pride of Darcy and the prejudice of Elizabeth caused by their mutual misunderstanding.

Earlier in the novel, Mary describes Pride as “…a common failing. Human nature is particularly prone to it”. Mr. Darcy stands as the most obviously proud character. Wickham tells Elizabeth that he has a ‘filial pride’ and we tend to agree with Mrs. Bennett’s complaint that

“He walked here and he walked there, fancying himself so very great”.

His haughty manners at the ball gave people a very bad impression of his personality, especially Elizabeth, whom he considered as “tolerable; but not handsome enough to tempt (him)”. Lady Catherine, Miss Bingley and even Elizabeth Bennet constitute the other proud characters. While Lady Catherine’s patronizing behaviour and Miss Bingley’s rudeness are due to their social class, Elizabeth can be deemed proud on the account that she has high respect for herself and this is best displayed when Elizabeth refers to Darcy: “And I could easily forgive his pride, if he had not mortified mine.” Being rejected by him at the ball, her prejudice mounts up and from the start; she willfully misinterprets all his utterances and actions.

Darcy’s pride stemming from the superiority of intellect, his noble ancestry and his enormous riches prejudices him strongly against Elizabeth’s family and her low connections. Although “he had never been bewitched by any woman as he was by her”, Darcy feels beneath his dignity to admit to his love for her. Even when he can repress his feelings no longer and does propose to Elizabeth, “he was not more eloquent on the subject of the tenderness than on pride”. He is considerably humbled when he is rejected without ceremony, and Elizabeth’s words “had you behaved in a more gentleman like manner” and her criticism of his self-conceit affects him deeply.

Elizabeth’s refusal initiates a process of introspection and self analysis in Darcy. Consequently, he emerges as a man who has gone through a considerable transition. This is revealed by his long explanatory speech to Elizabeth towards the end of the novel. The greatest proof of this transition is in his remaining firm in his choice of Elizabeth even after Lydia-Wickham elopement which draws from Elizabeth the acknowledgement-

“indeed he has no improper pride. He is perfectly amiable.”

Elizabeth’s judgments about other characters’ dispositions are accurate but only half of the time.  While she is correct about Mr. Collins and how absurdly self-serving and sycophantic he is and about Lady Catherine de Bourgh and how proud and snobbish she is, her first impressions of Wickham and Darcy steer her incorrectly.  When Charlotte tries to show Elizabeth the agreeable side of Mr. Darcy, Elizabeth cries out in a disdainful manner:

“To find a man agreeable whom one is determined to hate! Do not wish me such an evil”.

It is only when she reads Darcy’s letter that her eyes are opened to the true characters of both Darcy and Wickham.

In fact Darcy’s letter introduces in Elizabeth the same self-criticism that Darcy too undergoes. Thus Elizabeth realizes her folly in trusting her first impressions and states,

To sum up, the title, Pride and Prejudice very aptly pins down to the theme of the novel. The two protagonists have been tangling with pride and prejudice throughout the novel. They also struggled to put down their pride and get rid of their prejudice. However, to say that Darcy is proud and Elizabeth is prejudiced is to tell but half of the story. The fact is that both Darcy and Elizabeth are proud and prejudiced. The novel makes clear the fact the Darcy’s pride leads to prejudice and Elizabeth’s prejudice stems from a pride in her own perceptions.