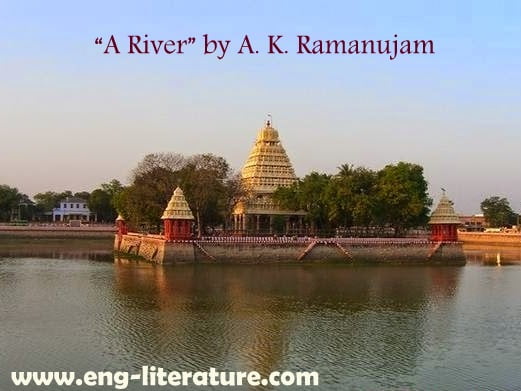 A.K. Ramanujan’s ‘A River’ is of his finest poem taken from his magnum opus, The Striders (1965). Here the poet has compared and contrasted the attitudes of the old poets and those of the new poets to human suffering. He has come to the conclusion that both the groups of the poets are indifferent to human sorrow and suffering. Their poetry does not reflect the miseries of the human beings. He has proved this point in the present poem.
The poem is all about a river, Vaigai which flows through the heart of Madurai city, the centre of Tamil culture. The word Madurai means a “sweet city”. It is a Tamil word. As a matter of fact, this city is the seat of Tamil culture and learning. It is also a holy city full of temples including the famous Meenakshi Temple. The poets have written many poems on the temples and the river. In the poem A River the poet presents two strikingly contrasting pictures of the river: a vivid picture of the river in the summer season and the river in its full flow when the floods arrive with devastating fury.
Also Read:
In the summer, the river is almost empty. Only a very thin stream of water flows. So the sand ribs on the bed of the river are visible. The stones that lie on the bed of the river also exposed to view. On the Sandy bed could be seen the hair and straw clogging the Watergates. The iron bars under the bridge are in need of repair. The wet stones are all like the sleeping crocodiles. The dry stones look like the shaven buffaloes. It is a wonder for the poet because not too often such scenes are described by the poets. All those symbolize the utter wretchedness and degeneration of human condition in Hindu culture
During the rainy season when the floods hit, the poets of past and present observe it very anxiously. They remember the rising of the river inch by inch from time to time. They remember how the stone steps of the bathing place are submerged one by one. Three village houses were swept away. The news came of a pregnant lady and a couple of cows being washed away.
Even the new poets do not bother to write about all these things. They look at it still in the old way as seen by the old poets. In the past, the poets were the appreciators of the cities, temples, rivers, streams and are indifferent to the miseries of human beings and animals. The river dries to a trickle in every summer the “poets sang only of the floods.” Flood is the symbol of destruction to person and property. The poets of today still quoted the old poets sans the relevancy of life:

“The new poets still quoted
the old poets, but no one spoke
in verse of the pregnant woman –
drowned, with perhaps twins in her,
kicking at the blank walls even before birth.”

The above lines satirize and debunk the traditional romantic view of the river Vaigai in Madurai, by the ancient poets. The image of “pregnant woman”implies a fine example of two generations, the present and the future. This is a poignant imagery full of pathos. R. Parthasarathy verily remarks

“The relative attitudes of the old and new Tamil poets, both of whom are exposed for their callousness to suffering, when it is so obvious as a result of the flood.”

The coloured diapers of the twins symbolize the black people and the white people. The use of wit, irony and humour, and dramatic imagery is distinctive of his style. Also we may label “A River” as a tragic-comic poem.