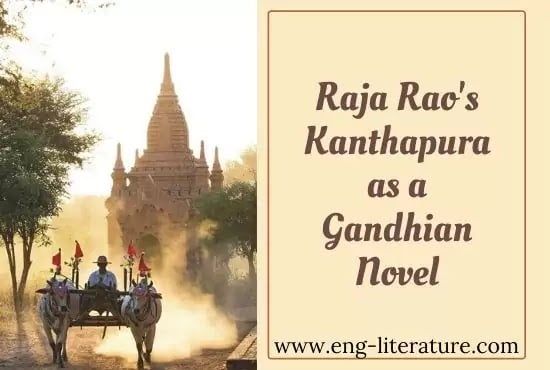 Kanthapura as a Gandhian Novel

Perhaps Bengal is the first province which felt the need of nationality and Indian English writing was born and brought up here with its first novel in English Rajmohan’s Wife (1864) written by Bankim Chandra Chatterjee; this novel has the seedlings of nationality, though it appeared in the texts of other languages of Indian writing much earlier. Raja Rao’s Kanthapura published in 1938, that is, pre-independence days can be taken primarily as a nationalistic discourse, with other dimensions too.

Kanthapura is a small traditional village with all primitive structure of an Indian society, divided, obsessed and loitering as a handicapped entity cocooned from the rest of the world and etherized as Eliot’s modernity. At the same time, it is India in its miniature and, in its sweet slumber; awareness creeps in gradually as an alien element with the literacy of a few, frequent visit to the outer world and the spread of the Gandhian philosophy. The introduction of such element create upheavals of all sorts —social, political, religious and ideological, that ultimately subsides giving way to the urge for a free nation.

Moorthy is the jargon of Kanthapura, no one can understand him in the beginning; subsequently he is simplified and made acceptable. The first step towards freedom is nationalistic consciousness, that is to be generated by Raja Rao and he is aware of this necessity; religion is the earliest weapon, Siva is the three-eyed, and Sawaraj, too, is three-eyed: self purification, Hindu-Muslim unity and khaddar, thus the consciousness is injected through popular sentiments, as K.R. Srinivas Iyenger clarifies,

“Bhajans and Harikatha mix religion and politics freely and often purposefully, the reading of a newspaper became as serious a discipline as the reverent reading of the Gita and handspinning is elevated into a daily ritual like puja. The walls of orthodoxy are suddenly breached: revolution comes as a flood, and carries all before it.”

It is not a political movement only, it includes social as well as religious waves too, as Paul Verghese puts it,

“Kanthapura is not merely a political novel; for the three different strands of experience in it-the political, the religious and the social-are so dovetailed into one another as of present to the readers a realistic picture of the social, political and religious revival that took place in the twenties of this century in India. Since the action is set in a village, the novel is an easily recognizable village novel.”

Kanthapura is a village in South India, probably lost in obscurity and Raja Rao makes it alive again. And this village is afflicted now, assailed by Gandhian philosophy, the haunted party is aggrieved. Civil Disobedience Movement (Dandi March and Satyagraha), Non-Cooperation Movement (by non-payment of taxes and defiance of British Government), the grass root programme of Congress Committee (Nehru’s social programme and Gandhi’s message), campaign against ill practices (like untouchability, drinking, child marriage, widowhood, illiteracy, communal feeling, sexual exploitation, etc.) and finally the unification of the whole society for a singular nationalistic cause, all these things are anxiety towards freedom and nationhood.

Obviously, Kanthapura is the urge to be free from the demon of the foreign rule. Kanthapura as India in microcosm has religion as its backbone that influences its social and political activities. Talk of communal harmony, swaraj, khadi, Gandhi-bhajans replace Harikhata; temple becomes the platform for political interactions, Ram/ Krishna is replaced by Gandhi: in a sense, innocence and ignorance of villagers provide a congenial atmosphere for sowing the seeds of nationality. Unexpectedly, Moorthy proves to be ahead of Gandhi. For these religious villagers Gandhi is an incarnation like Lord Rama and Lord Krishna, who came to establish the righteousness and so the satyagraha became a religious ritual.

Moorthy exploits the Harikatha tradition to spread the message of freedom struggle of Gandhi. M.K. Naik is of the view that “Kanthapura probes the depths to which the nationalistic upspring penetrated, showing how, even in the remote village, the new patriotic upsurge fused completely with the traditional religious faith, thus rediscovering the traditional Indian soul”. Meenakshi Mukherjee in her book The Twice Born Fiction admits,

“The independence movement in India was not merely a political struggle but an all-pervasive emotional experience for all Indians in the nineteen twenties and thirties. No Indian writer, writing in those decades or writing about them, could avoid reflecting the upsurge in his work. Thus many of the English novels written in India in the twentieth century also deal with national experience, either directly as theme or indirectly as significant background to a personal narrative.”

Another significant factor that contributed to the development of nationalistic consequences was responsible for the unification of the educated mass irrespective of cast, creed, sex, religion, etc., and taught them the importance of freedom and law (constitutional). Certainly, the elite Indian brought this nationalistic movement and we have Raja Ram Mohan Roy and his followers Derozians, Tagore, Ramkrishna, Vivekananda, Mrs Annie Besant, etc. Indian literatures began to flourish in the modern Indian languages in the later part of the nineteenth century, with a definite shape.

Raja Rao is not a politically committed writer like Anand and Narayan, rather he is different, as William Walsh observes,

“…is poetic, metaphysical, Lawrentian. Kanthapura focuses on the intensity of Indian life, its physical immediacy, its traditional swaddling and its religious murmuration.”

It is remarkable to note that culmination of Kanthapura has an element of doubt while shifting from Gandhism to Nehruism and it is here that some critics raise question and also on the integrity of Rao as a Gandhian. Though both Gandhi and Nehru have the same destination, there is difference in their approach; Nehru is anglicised in his ‘borrowing and difference’, Gandhi is a bit nostalgic and his principle unscientific and so unwelcomed.

Right from the beginning a reader feels a change in the small remote orthodox village, the agent is completely transformed Moorthy, the motivation is complete and experience a sort of nationalism. Transformation continues; Moorthy continues to develop, though he does not get support from all quarters and imperialism seems to be crumbling. Achakka’s thinking and behavior reflects her understanding of the dynamics between the village and the Indian nation as the blending of tradition and modernity. Kanthapura undergoes the process of nationalization, as an intricate and dynamic process and the process is an internal one. Achakka is ‘a perpetrator of Hindu revivalist propaganda’ and Rao stands as a Hindu reformer to encourage self-exploration.

Such nationalistic discourse allows us to re-examine traditional ideas about caste (that is the social structure), the role of women (that is, the restriction imposed on her), the relation between the elite and the masses (that is, the democratic pattern), the communal difference (that is between Hindu and Muslim), child marriage and early widowhood, sexual exploitation of poor and pseudo-supremacy of the literate upper class; it is the native Indian response to the British colonial design and that too in ancient Indian puranic mode of narration.