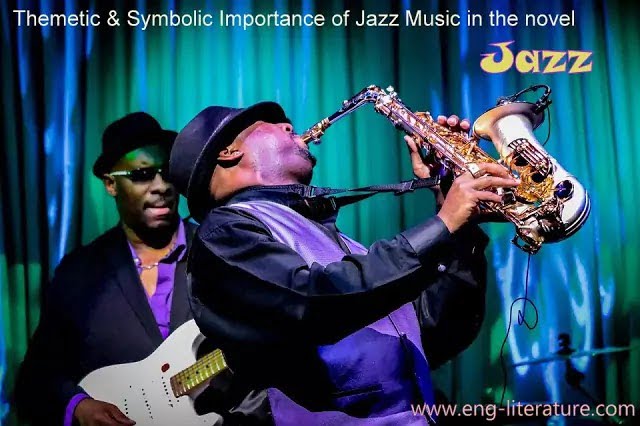 The novel borrows its title from Jazz music and the idea of music is discussed throughout the novel. As the name of the novel implies music operates both thematically and formally to provide structure to the book. The Jazz music of the 1920s situates the narrative in a specific cultural and historical moment, when a black aesthetic style was gaining ground in New Orleans and New York. Both the city and the woods of Virginia are described as having their own music and rhythm and the pace of narrator’s storytelling ranges from upbeat and fast to slow and “bluesy”.

Music also speaks to the individual characters on a deep level, as when Alice Manfred worries about the sinful powers of the music. Alice Manfred and the Miller sisters interpret Jazz music as the anthem of hell. The passion and pleasure that Dorcas and violet find in the music is contrasted with the musical treatment of Joe’s crime. When he stalks and shoots Dorcas, it is at a party where loud music is being played to incite passion, “boil” the blood and “encourage” misbehaviour. However, music can also be restorative, as Felice facilitates the healing process between Joe and Violet by bringing over her records and watching them dance.

For the entire novel, music is the weapon that the city wields to control its citizens. The seasons and weather are determined by the presence of clarinet players in the street. Music also bears a sadness that can be juxtaposed to violet’s ribaldry and Joe’s flared passion. Wild’s disappearance takes place as her body is replaced with a trace of music and this sound haunts Joe’s memory for the rest of his life. Similarly, the “blues man” who walks the streets becomes the “black-and- blues man” and finally, the “black therefore – I’m-blues man,” providing a critique of racism. The “blues” songs that the characters evoke are largely the consequence of suffering brought about by America’s racist traditions.

Jazz music is also a reference to the racial segregation prevalent in America of that time. “Cultural mourning” connotes the response of African Americans not only to the lost lives and lost possibilities produced by slavery but also the loss of cultural productions through appropriation by white culture. In her 1992 novel, Jazz, Morrison re-claims black music both by re-conceptualizing the Jazz Age and by employing the literary equivalents of its musical forms.

If one of the most notable things about the early decades of the 20th century was the overlapping of various modes of artistic development in response to an interval of dynamic social and cultural changes, one of the most regrettable features of histories of the period has been the tendency to maintain a segregated perspective, restricting the contributions of artists of the Harlem Renaissance to the “Coloured only” side of a long-perpetuated division in cultural and aesthetic analysis. For example, in Modem and Modernism: The Sovereignty of the Artist 1885-1925 (1985), Frederick R. Karl traces the common aesthetic roots of modernist literature, painting, and music without mentioning a single African-American artist in any of those mediums.

More recently, revisionist scholars of the immensely fertile period that encompassed both the Jazz Age and the Harlem Renaissance have corrected such narrow views, not only underscoring the conjoined contribution of musicians, writers, and painters of the period but acknowledging the vital cross-fertilization that occurred among artists of different races and mediums. Thus, focusing on the artistic vitality of New York City during the second decade of this century, Ann Douglas emphasizes the “free and creative borrowings across race, class, and gender lines”.

Despite such cross-fertilization however—or perhaps because of it—not only jazz music but, more broadly, the Jazz Age to which it gave its unique aesthetic stamp was rapidly appropriated by white culture. As Douglas adds,

“to appropriate something is to abstract it by taking it out of its matrix, its indigenous original context, in order to resituate it in a plan of one’s own making, a place alien to its natural habitat and design”.

In conclusion, we can say that with the writing of Jazz, Morrison takes on new tasks and new risks. Jazz does not fit the classic novel format in terms of design, sentence structure, or narration. Just like the music this novel is named after, the work is improvisational. In this work, she is influenced not only by the Jazz, blues, and gospel music she was reared on, but also by the folklore, tall tales and ghost stories that her family told for entertainment. The result is a writing style that has a unique mix of the musical, the magical, and the historical.