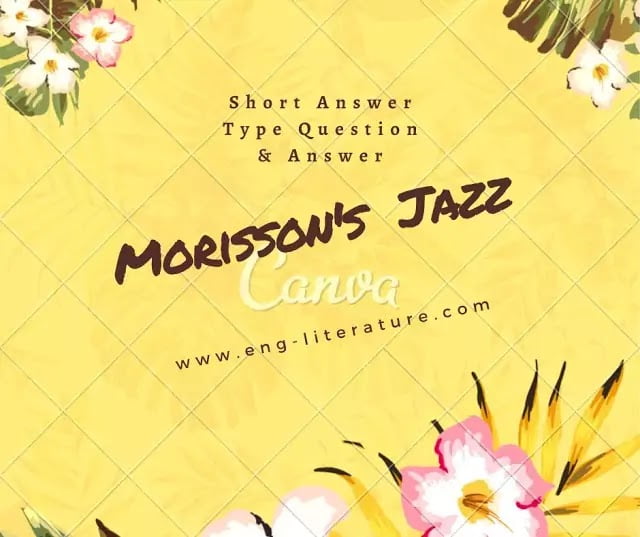 Here are few short questions and answers from Jazz that might help you:

1.What is the symbolic significance of the title ‘Jazz‘?

Ans. The Harlem Renaissance was the name given to the cultural, social, and artistic explosion that took place in Harlem between the end of World War I and the middle of the 1930s. During this period Harlem was a cultural center, drawing black writers, artists, musicians, photographers, poets, and scholars.

Ans. The reason why jazz was called “the devil’s music” was because “Jazz” used to be a slang word associated with sex. Also, jazz originally came out of the brothels. So the more “wholesome” members of society did not want anything to do with it.

Ans. Music is an art, entertainment and medicine for the soul and body. It is intrinsic to all cultures. Jazz was invented by Blacks and made for the poor people. Faced with racism, discrimination and segregation, the poor black people have always found comfort and a sense of peace in Jazz music.

Ans. Feminism is a range of movements and ideologies that share a common goal: to define, establish, and achieve equal political, economic, cultural, personal, and social rights for women. This includes seeking to establish equal opportunities for women in education and employment. A feminist advocates or supports the rights and equality of women.

Ans. This line is from Toni Morrison’s novel “Jazz”. In this line, Joe Trace addresses Dorcas directly in his imagination. Dorcas is already dead, but his is explaining how he felt and still feels about her. He does not regret the relationship because he freely chose it.

6. Explain ‘When they fall in love with a city, it is forever and it is like forever.’

Ans. The context here is the arrival of Joe and Violet in Harlem in 1906, when they arrived as part of the great migration north of black people, who were escaping the racism of the South. They all fell in love with Harlem as a place where the possibilities for them seem endless. So their love for Harlem will last forever.

Ans. This line is, in fact, Henry’s ultimatum that Golden Gray intends to live as his son, the young man will have to become less of a prince, accept the physical rigors of rural life and self-identify as a black person. This line also suggests that masculine identity wholly depends on man’s ability to act, to exercise his will.

Ans. Violet is a fifty-six year old woman living in Harlem with her husband Joe. She is nicknamed “Violent” after she invades Dorcas’ funeral to dishonor the girl’s face with a knife. An orphan raised by her grandmother in rural Virginia, Violet herself has no children and, after several miscarriages, she longs for a child.

Ans. Violet releases her encaged birds after Dorcas dies. She rejects what she holds dear, both in terms of the birds and in terms of her relationship with Joe.

Ans. Violet’s husband Joe had a young girlfriend named Dorcas whom Joe killed at a party. Violet is mean enough and good looking enough to think that even without hips or youth she can punish Joe by getting herself a boyfriend in her own house. She thinks it will dry his tears up and give her some satisfaction as well.

Ans. Joe Trace is Violet’s husband. He is a good looking man in his late fifties. He works hard, shuttling between a job as a waiter and a cosmetic salesman. He loves his wife but is hurt when she closes herself off from him because of her depression. A sympathetic character, Joe is nonetheless a murderer and adulterer, cheating his wife and then killing his lover.

Ans. No one knows the real names of Joe’s parents. When Joe is in school, he is asked to supply a last name for himself and he comes up with Trace because his adoptive mother has told him “O honey (your parents) disappeared without a trace.” Joe’s mother is rumored to live around the town of Vienna, Virginia and is named Wild.

Ans. Joe and Violet are husband and wife. However, there is always tension between their relationship. The main reason is the presence of “other” in both characters. Moreover, both have grown up motherless. Violet’s eccentricity and depression on one hand and Joe’s love and murder of Docras on the other hand create tension between their relationship.

Ans. Joe and Violet are ridiculed in their community because they are old black couple. Both have grown up motherless. Moreover, Violet makes little money as an unlicensed hairdresser, arriving at her clients’ residences.

Ans. Violet is called the “Bird Lady” because she keeps a parrot and lots of other birds in her apartment. She communicates with the birds and her parrot says “I love you.”

Ans. Joe and Dorcas’ relationship is labeled “spooky” because it was unusual and unnatural. There was more than a 30 year difference in their ages. After Joe shot Dorcas he cried everyday about it and was unable to resume a normal life. To protect him, Dorcas refused to name Joe as the person who shot her. After her death, the love continued and became more intense.

Ans. Alice Manfred doesn’t want the police involved because the police have traditionally been an enemy of the African-American community. The police are considered as dangerous as the criminals. She doesn’t want them in her house sitting in her chairs. Furthermore, she has heard of Joe’s tears and knows that he will punish himself.

Ans. Violet is attractive but very dark-skinned. She is 50 years old, has hard edges to her personality, and is starting to act crazy. Violet no longer talks to Joe because she has time only for her birds. Violet is very thin, yet very strong, and Dorcas on the other hand is very light-skinned with long hair. These are two pluses. She is not particularly attractive, but she is 18-years-old. Dorcas is feeling the full impact of her sexuality and is eager for intimacy. It is easy for Dorcas and Joe to share their deepest secrets. Violet is independent, but Dorcas is extremely vulnerable and needs Joe’s protection.