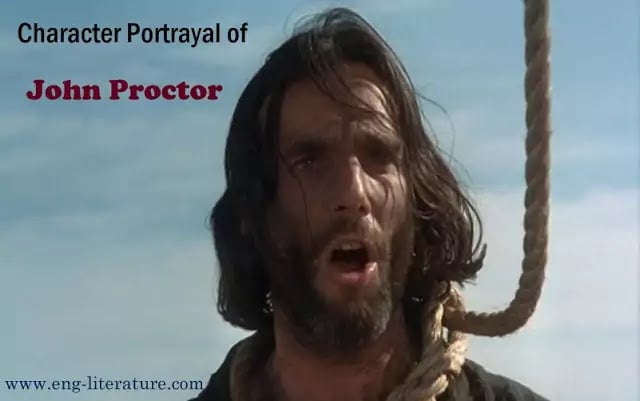 “John Proctor stands unique amongst Miller’s creation not because of any inherent superiority but because of the intensity of his moral response.”

In Arthur Miller’s The Crucible, John Proctor is the central character and the protagonist of the play. Miller gives very delicate touches in digging the subtle ties of Proctor’s relationship with his wife, Elizabeth and Abigail. Miller also shows very skillfully Proctor’s attitude towards Puritans, witchcraft, court and toward his friends in the end when he was going to be punished for being a witch.

Although, Proctor is the central figure yet he has been idealized as a hero. He is a blunt, stubborn countryman, though not excessively sensitive yet capable of being tender, especially towards women According to John Mahonery:

“The attention of the playwright is on Proctor’s moral choice.”

Miller, himself, says in his introduction of the play that he wants to draw the image of ‘a guilt ridden man’ who has a sense of guilt that he has betrayed his wife, Elizabeth by playing adultery with Abigail, who is a very cunning fraudulent girl. And this guilt forces him to take positive action at the right moment and consequently suffers a great loss of his life.

Then Proctor is a practical fanner, struggling to manage living for his family. He is a physically strong man, cool tempered and not so easily provoked. He emerges as a down-to-earth man who speaks his mind and is not afraid in confronting those in front of the authority – the authority of society, priest and the court. Only his guilt of all with Elizabeth keeps him indecisive till the very end.

John Proctor is also good independent minded Christian who is fed-up from dogmatic and the strict values of the church only in order to maintain their authority. He also does not care his infrequent presence in church. He openly condemns Parris and his greedy and hellish Sermons. It is Parris’ hellish preaching which prompts John Proctor to stay away from Church and explain his absence as follows:

“I have troubled enough, I come five miles to hear him preach only hellfire and bloody damnation.., others stay away from church these days because you (Parris) hardly ever mention God anymore.”

He is an honest man and sees himself as a sinner and unworthy to follow the martyrs like Rebecca and Giles.

Proctor never interferes with the affairs of others. Miller gives his social views that man can’t isolate himself from the trials of community, society, and the man, who refuses to be committed to some cause, will face tragic result. If a man is to be a part of society, he must function and participate in all the aspects of society.

Proctor tries to avoid any involvement in Salem witchcraft trials. He is afraid of the disclosure of his secrets of adultery with Abigail which was probably no more than a moment of passion prompted by the impetuosity and it also characterizes many of his other actions and speeches.

John Proctor retains a very strict attitude towards witchcraft. He does not believe in it and takes it as an irrational act. He does not want to be involved in the court probe about witchcraft but at the end he has to do so. When he learns that Elizabeth has been accused, he says:

“Is the accuser always holy now? Were they born this morning as clean as God’s fingers? I’ll tell you what’s walking in Salem vengeance. We are what we always were in Salem but now the little crazy children are jangling the keys of the kingdom and comfort vengeance writes the law!”

But in the end, we see that Procter is accused of being a witch because of his rebellion against the church and the court. He wants to prove the fraudulent behaviour of the girls but he is accused in return. He is sentenced to death if he does not confess to be a witch. At first, because of the pressure on him he becomes agreed to confess and signs it but his innocent soul does not let him to confess, therefore, he tears out confession. He says:

“Because it is my name! Because I cannot have another in my life! Because I am not worth the dust on the feet of them that hang! How may I live without my name? I have given you my soul; leave me my name.”

He does not want to lose his true identity and to be called a witch. Therefore, he sacrifices his body and saves his soul.

Once Proctor abandons the society at its own, but society does not let him maintain himself in the critical junctures of his life. He remains in a critical and complex situation of hope and fear and life and death. He remains caught up in a web of moral dilemmas woven by society. He requires an enormous moral courage to make right choice, the choice which makes all the difference, and we see that Proctor chooses his soul. This is what Miller wants to tell us. He says:

“My central impulse for writing at all was not the social but the interior psychological question.”