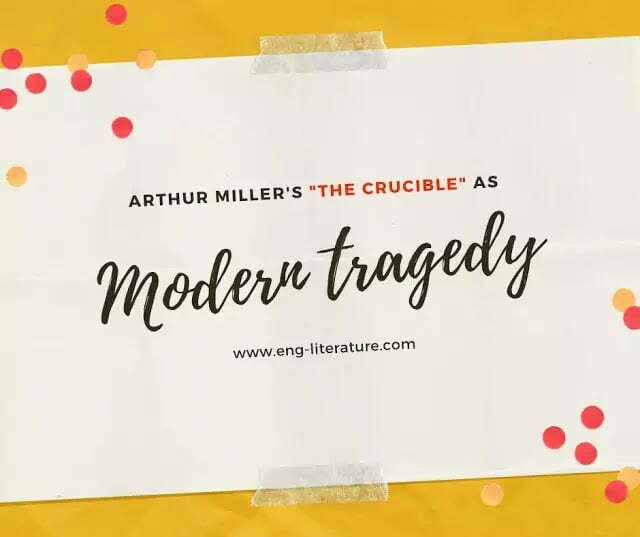 The Crucible as a Modern Tragedy

The crucible is a modern tragedy written in the Context of a historical incident of Salem’s witchcraft (I7th century) but the play highlights the cruelty of McCarthyism and communists trails in America in 20th century.

The play contains almost all the spices of a modem tragedy. Though it is quite different from other tragedies as it brings forth a story of historical importance, yet the protagonist of the play John Proctor, shares a lot with a modern man. Miller has blended intellectual, social, moral and psychological problems of a modern man in the character of Proctor.

There are many arguments whether this play is a tragedy or not. The left hand critics declare that The Crucible is not a tragedy as it does not fulfill all the conditions set by Aristotle, that the protagonist should be a royal birth and the centre of attention of everyone as it was common in the plays of Sophocles and Shakespeare to be able to arouse the feelings of pity and fear associated to a tragedy. But this accusation does not hold much strength as in the world of today kings and Princes are not present with similar pomp and show. So, the presentation of a royal figure would be unrealistic and fictitious.

Moreover, modern man is not confronted with supernatural elements like the heroes of classical plays. Rather today man is at war with society to have dignified and respectable position in it. Now everyman is a centre of his own attention. The basic problem of modern man is to determine his Place in his surroundings. So the concept of tragedy should be changed according to the requirements of time and age. Thus, a modern tragedy is a tragedy of a layman because a modern man is layman. So, modem tragedy is a tragedy of everyman.

Arthur Miller stands head and shoulders high among the modern American dramatists. He keenly observes the conflict between the aims and objectives of an individual and his social surroundings, and beautifully presents these conflicts in his plays. In this play he presents the image of a guilt-ridden man.

John Proctor is a common countryman, a farmer by profession. He is respected for his uprightness and fear for his sharp dealing with hypocrites. The writer says that in his presence, “A fool felt his foolishness instantly”. But Proctor also holds guilt on his name. He has been sexually involved with a girl, Abigail. Proctor is deeply repentant on his sin of adultery and betraying his wife. Elizabeth. He cannot come out of this guilt till the end and feels that his salvation is not possible, and that he cannot climb up the altar steps with the dignity of righteous people. Considering his statement to Elizabeth:

“Let them that never lie, die now to keep their souls. It is a pretence for me a vanity that will not blind God nor keep my children out of the wind.”

But he reaches a dignified position through proper decision in the end. Thus the attention of the playwright is on the moral choice of Proctor. Though he is a sinner, yet he is a man of good conscience.

It is also to be noted that in Miller’s plays the catastrophe rises from some sexual sin. In fact, he wants to enhance the importance of family life, if the rules of marriage are not abided by, the downfall is sure to come in one or the other way. Miller says:

“I cannot live apart from society”.

He thinks that moral honesty cannot be separated from a commitment to the society. Though a man and environment do not merely interact, yet they are the part of each other- a fish is in water and the water is in fish. Miller implies this dictum to every human being and proves it through his protagonist that every person has to live in harmony with his surroundings.

Proctor has been presented as a rebel of society leads a life of Isolation – partly because of his shame and partly because of his stubborn manner and this isolation and becomes his flaw. At first, Proctor denies the importance of society stays away from the trials of witch hunt and even during his trial takes selfish decision to save his life. But later, he has to accept that he is nothing without his surroundings. He realizes what he owes o his neighbours. He knows that his acceptance of being a witch would greatly demoralize the people and they would not fight against this brutal act:

“I blacken all of them when this (my confession) is nailed to the church the very day they hang for silence.”

Miller presents self discovery of his protagonist within all the action of the play. The self quest of Proctor begins when Elizabeth repeatedly pleads him to judge him. He has lost faith in his goodness and needs some outer action to invoke him to a certain decision. But when Elizabeth pushes him to take his decision and then he asks for divine help and cries out:

And soon he gets the answer. In the final moments of his life he realizes that he has not yet lost all of his virtue for at least he knows his responsibility towards his neighbours. He utters:

On a broader level, The Crucible, is also a social tragedy. Miller describes how innocent people are mercilessly convicted and murdered in order to save an ideology. By the time of the setting of the play, Puritan’s church and government was losing control over individuals. This is because of the corruption of priests, presented by Parris in the play. The weirdly vanity and hellish sermons of such priests take people away from the church. So church has an ever increasing fear of losing authority over the masses of people and this fear actually the root cause of such wide spread bloodshed. Thus Puritan church and government make desperate attempt to hold people in their grip by using a quotation of Bible which says:

“Thou shalt not suffer a witch to live”