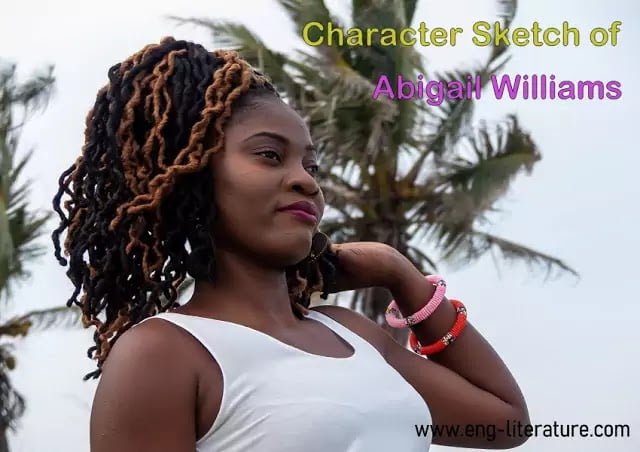 Miller says that the “structure” of The Crucible “centres on John, Elizabeth, and Abigail.” Reverend Parris’s niece Abigail has been dismissed from service by Elizabeth Proctor after she found out the illicit affair between Abigail and her husband seven months ago. Since then Abigail has been living with Parris. But she still lusts for Proctor and, by involving his wife in the rampant rumored practices of witchcraft in Salem and getting her hanged, she plots to become Proctor’s wife. She thus orchestrates the behaviour of the girls who follow her blindly in raising the bogey of witchcraft and by involving several innocent citizens in the witch hunt. Her motivation is a blend of private vengeance and desire. She proves that people’s terror could be manipulated to meet her own selfish ends.

Abigail Williams, Reverend Parris’s seventeen-year-old niece and antagonist of the play, is a “strikingly beautiful girl … with an endless capacity for dissembling”. The sexual repression of the times drives Abigail and a group of teenage girls to secret outings in the woods, where they dance naked. When Parris spies them, guilt and fright cause two of them, Ruth Putnam and Betty Parris, either to pretend or experience catatonia. Betty lies mysteriously ill and Parris is worried because Doctor Gregory has failed to diagnose the cause of her illness. News spreads fast, hymn-singing villagers crowd the parlor below, and Reverend Hale arrives, summoned as an expert on witchcraft. But Abigail tells Parris, “It were sport, uncle!” When her accomplices Marry Warren and Mercy Lewis arrive, Abigail bullies them into submission. Later as the girls are questioned, Abigail, to clear her own name, accuses, as a tool of the Devil, Parris’s black West Indian slave Tituba.

She keeps up the pretense that her name is “good”, it is not “soiled”, and there is “no blush” about her “name”. She was dismissed by Good Proctor, “a gossiping liar” and “a bitter woman, a lying, cold sniveling woman” because she refused to “slave” for her. As for her not being able to find a job after that, she loftily declares:

“They want slaves, not such as I. Let them send to Barbados for that. I will not black my face for any of them.”

But she stands “as though on tiptoe, absorbing his presence, wide eyed”, when John Proctor enters. She had a brief affair with him seven months ago when she worked as his housemaid and was dismissed by Elizabeth Proctor when she discovered it. She entreats John, “Give me a word, John, a soft word.” A brief exchange between them reveals Abigail’s desire for John, her hatred for his wife Elizabeth, and her determination not to resume the relationship. She reminds him:

“I know how you clutched my back behind your house and sweated like a stallion whenever I come near! … I saw your face when she put me out, and you loved me then and you do now!”

He has also been standing below her window for the past seven months at nights and looking up, “burning in your loneliness”. Proctor reluctantly admits that:

“Abby, I may think of you softly from time to time. But I will cut off my hand before I’ll ever reach for you again.”

But she persists. Bursting into tears, she tells him,

“I look for John Proctor that took me from my sleep and put knowledge in my heart!…You loved me, John Proctor, and whatever sin it is, you love me yet! … John, pity me, pity me!”

Her past illicit relationship has driven a wedge between John and his wife; she still does not trust him. She believes, and rightfully so, that Abigail has raised the bogey of witchcraft in order to accuse her and get her hanged so that she can take her place in John’s life and household. Elizabeth wants her husband to go and tell Ezekiel Cheever, the tailor turned warrant officer of the court.

The second scene in Act Two, deleted from the published text, reveals more about both Abigail and John. Abigail’s opportunism has been evident since the opening scene, when she deflects to Tituba Hale’s questions. She is amoral, with no concern for the good-hearted servant, whom she herself asked for a charm but whom she now denounces as a witch.

The change in Abigail is apparent to proctor, as she tells him, “The jab your wife gave me’s not healed yet”, referring to the disproved needle in the poppet.

While John’s conscience suffers for his adultery and for jeopardizing Elizabeth’s life, his guilt can only be intensified by Abby’s outburst as she vows,

“Oh, John, I will make you such a wife when the world is white again.”

She then starts shivering and pretends that Mary Warren has sent her spirit in the form of a yellow bird up to the ceiling of the court room and that she is frozen by the cold wind. Touching her hand, Judge Hathorne confirms this. The other girls also start seeing the yellow bird on the ceiling which has come to attack them, and they are equally terrified. So is Danforth as Proctor keeps protesting: “They’re pretending!” Mary Warren is so affected by the shivering girls that she appears to have been hypnotized. She starts pleading: “Lord save me! … Abby, don’t do that!”She becomes hysterical and rushes toward the door as Proctor tried to hold her. So strong is Abigail’s malevolent influence that she ends up by retracting her testimony and accusing Proctor of practising witchcraft on her as Abigail looks up and cries, “Oh, Heavenly Father, take away this shadow!” Proctor is taken aback at this sudden turn of events. He roars at her:

“How do you call Heaven! Whore! Whore!”

Danforth is “dumbfounded” but Abigail coolly tells him that Proctor is lying. He then confesses to lechery and charges her to falsely accusing his wife of witchcraft and getting her hanged.

Proctor is supported in her display of hysterics by Reverend Hale, who is by now disgusted with the courtproceedings and who eventually quits the trial: “I believe him! … This girl has always struck me as false.” Abigail again whips up the hysteria of being attacked by the yellow bird on the ceiling. The others join her and start screaming. John Proctor is proclaimed as “the Devil’s man”, arrested and eventually hanged for practising witchcraft on Mary Warren.

The last we hear of Abigail is when a crestfallen Proctor informs Danforth that Abigail has robbed him of 31 pounds and fled with Mercy Lewis. Opportunistic to the last, she provided for her sea trip by breaking open his strongbox and decamping with nearly his half-year’s salary. In the epilogue we are informed:

“The legend has it that Abigail turned up later as a prostitute in Boston.”

Sometimes literature throws us a bone in the form of a really awesome antagonist. Someone we hate, but find totally magnetic. Someone who chills us to the core, but we can’t stop watching. Abigail Williams is vengeful, selfish, manipulative, and a magnificent liar. This strikingly beautiful young lady of seventeen years old seems to be uniquely gifted at spreading death and destruction wherever she goes. She has an eerie sense of how to manipulate others and gain control over them. She is the pebble that gets the avalanche of the Salem witch trials started. She sends nineteen innocent people to their deaths. These things make her an awesome antagonist.

In addition to being an accomplished liar, Abigail is also extremely single-minded. When she wants something, she goes for it; if one method doesn’t work, she’s happy to go with Plan B. A good example of this is Abigail’s pursuit of John Proctor. Because Abigail wants John Proctor for herself, she gets Tituba to make her a potion to kill Goody Proctor. When that doesn’t work, she pleads with John to take her back; when that doesn’t work she accuses Elizabeth of witchcraft and manages to get her arrested.

An easy, surface explanation of Abigail’s character is to label her as a calculating sociopath, and there is some evidence that supports this claim. In Act 1, Abigail does seize upon the opportunity to divert blame from herself to first Tituba and Ruth, then just Tituba, then to women with questionable reputations like Sarah Good, Goody Osburn, and Bridget Bishop. She doesn’t care at all about the fates of the women being blamed – she’s just accusing them to further her own ends.

“a vicious wench who not only exploits her chance to supplant Elizabeth Proctor when the time comes, not only maintains a tyrannical discipline among the afflicted girls, but also sets the entire cycle of accusations in motion for selfish reasons”.