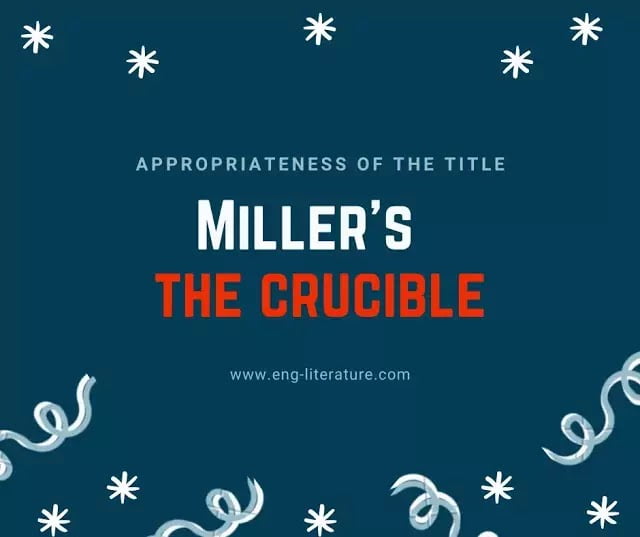 Initially called The Chronicle of Sarah Good, The Crucible is a dramatization of the Salem Witch trial. Arthur Miller uses the title of his play The Crucible as a Metaphor constantly throughout the text. A crucible is a container used to heat metals at a high temperature so the metal can be cast, often using intense pressure to do so. Crucibles are often also used to remove impurities from a substance, so that only the pure matter remains. The relevance of the title is apparent in many of the themes and issues of the play, and is demonstrated through striking imagery and the actions of characters that Miller portrays to us.

The relevance of the play’s title becomes evident during the first act, as we gradually piece together the information concerning the girls dancing. The kettle viewed by Reverend Parris, a argumentative and unreasonable man in his middle forties, mirrors a crucible. We are told that the girls had made a brew that contained a little frog and blood. This concoction was viewed by the characters involved as a potent, fearsome mixture and this signifies the beginning of the Salem tragedy. It seems that from this ‘brew’ a more sinister force is released, or metaphorically speaking, the impurities are released due to the aid of a crucible.

The dancing and the contents of the little pot seem to fuel the rumours, lies and tragedy of Salem. Suspicion soon engulfs the community and the little privacy that once existed suddenly shatters. Privacy was quickly interpreted to mean that people had some terrible fault to hide and there was an intense pressure for neighbours to reveal each other’s sins. Here is evidence of how the play’s title is reflected in the actions and words of the characters.

In fact, Reverend Parris makes an ironic comment that is closely linked with the The Crucible:

“Why, Rebecca, we may open up the boil of all our troubles today because in the end the witchcraft investigation provokes the burning down and destruction of the community. “

Here The Crucible is once again used metaphorically to illustrate characters beliefs. The use of such words as ‘boil’ and ‘burning down’ are directly linked with the image of a crucible at work.

The witch trials are also metaphorically a crucible for people’s grudges, and their seeking of revenge. The play shows us also how people can give into their fear and superstition. Salem quickly turns into a melting pot of suspicion and vengeance with nearly everyone trying to pull power out of the pot. The witch trials provided an avenue to bring hostilities out into the open in a theocratic society that had little opportunity for speaking out.

The trials are not really about witchcraft. Abigail Williams, a strikingly pretty seventeen-year-old orphan, admits to John Proctor, a well-respected farmer in his mid thirties, how the witchery is a hoax:

“We were dancing in the woods last night and my uncle leaped out on us. She took fright, is all”.

Furthermore, the relationship between Abigail and Proctor is highlighted using imagery connected to the concept of a crucible. The relationship, based more on lust than love, is one that Proctor dearly regrets and that constantly plays on his conscience. Heat and fire can be used as symbols that are strongly connected with a crucible, and Miller uses this symbolism cleverly:

“… you clutched my back behind your house and sweated like a stallion whenever I came near!”

“I have a sense for heat, John … and I have seen you … burning in your loneliness.”

The relationship can be likened to the concept of a crucible because it represents the high temperatures and reactions that take place in a crucible. The relationship between Abigail and John is shown in great contrast with his wife Elizabeth, a cold and unforgiving woman. The relationship between John and Elizabeth is cold, distant and tense, with no passion or fire. However, despite his feelings of passion for Abigail, Proctor realizes that he must not succumb to them again. This decision effectively ends their relationship and extinguishes the heat between them.

Fire and heat is used as a symbol once again in Act Three. The Crucible metaphor is illustrated in the play when Judge Danforth, a strict judge with a strong belief in authority, says to Proctor,

“We burn a hot fire here; it melts down all concealment”.

The court scenes were times of tension, intensity, pressure and conflicts between powerful authorities refusing to realise they have signed away innocent lives on the strength of a lie. Also things are permanently and physically changed in a crucible, when they are turned from one thing into another. This is reflected in the play by the fact that many characters in the play are exposed to high pressures during the trial. This pushes many characters to the limits of reason and changes them mentally, physically and spiritually.

Another parallel between the word crucible and the play is the fact that a meaning of the word crucible is a severe test or trial. When John Proctor is convicted of witchery he wrestles with his conscience about whether he should confess or be hanged. His internal conflict between the opportunity to protect himself at the expense of others weighs heavily on his mind, but he chooses the ultimate sacrifice – his life. He asks his wife towards the end of The Crucible:

“Would you give them such as lie? You would not; if tongs of fire were singeing you, you would not.”

This makes it evident that Proctor recognises his own shortcomings and once again conjures the image of fire that is closely related to a crucible. Miller also uses the text to make connections between Salem and Hell.

“A fire, a fire is burning! I hear the boot of Lucifer, I see his filthy face! …. And we will burn, we will burn together!”

Here Miller makes the ultimate connection between the play’s title The Crucible and the society he is portraying. The intense heat and pressure of Hell is also present in a crucible, and both can be associated with the hysteria and suspicion of the people in Salem during the witch trials.

The obvious relevance of The Crucible can be found at the very core of the text. A crucible can be used to separate and discard impurities the in a substance – in effect, that was the essence of the Salem witch trials. In an attempt to separate the ‘good from the bad’, many respectable and virtuous people were hung due to the mass hysteria and pressure caused by ‘The Crucible’ of the times.

By reflecting his play’s powerful and effective title throughout the text, Miller prompts his audience to apply his metaphor to other situations in history. It was most certainly Miller’s own experiences during the ‘communist hunt’ of the 1950’s that provoked him to write this play. Miller saw the parallels between the McCarthy era and the Salem witch hunts for what they really were – a crucible. Severe trials held in an attempt to separate the good from the evil, the pure from the tainted. Through his text, he shows the frailty and vulnerability of human nature by showing how hypocrisy and hysteria can lead to times of suspicion and instability. He leaves us, his audience, to make our own judgement about similar periods in history and to ask ourselves the question – Is it possible, or even predictable, that this situation will ever occur again?