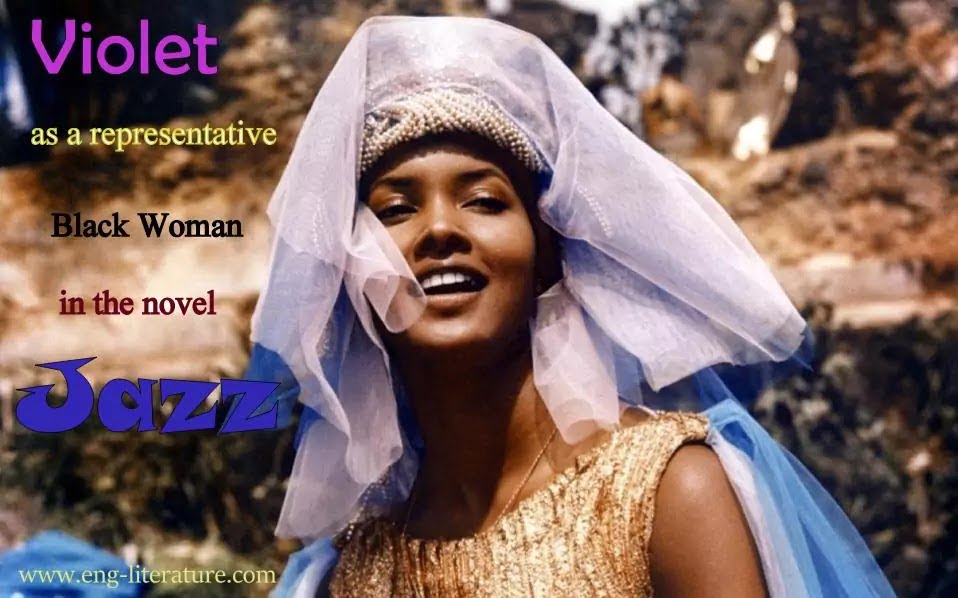 Character Analysis of Violet in Jazz

In Jazz Violet Traces is the central character through which Morrison describes the woes of the black women. Violet is a fifty six year old woman living in Harlem with her husband Joe. Hopelessly scrawny with very dark skin, Violet is beautiful if one looks at her long enough. She has a reputation in Harlem for being odd and she does not quite fit with the other ladies. She becomes sullen and taciturn with her husband and explodes into violence at his lover’s funeral, earning herself the nickname “Violent”.

Violet was raised by her mother, Rose dear, in Vienna, Virginia, as one of five Children. Her father would leave the family for long stretches of time and when the family’s belongings were repossessed, Violet’s mother committed suicide by throwing herself down a well. On becoming an Orphan Violet was raised by her grandmother in rural Virginia. When Violet married Joe Trace she sought to escape the hard- knocks lifestyle of her childhood by moving to the city. Neither she nor Joe had wanted children, but as Violet grows older, she begins to feel a deep longing for something to love. Her relationship with Joe becomes strained when she falls into depression. When she finds out that Joe has cheated on her with Dorcas, Violet projects all of her anger, sadness and frustration by slashing Dorcas’s face at her funeral as she lies in her open casket. In the months that follow, Violet searches for peace and longs to heal herself and her marriage, discovering, finally, that she has to “make it” by taking ownership of her happiness and refusing to be a victim.

Violet is considered “crazy” by her community for sitting in the street, as well as for “stealing” a baby and attempting to disfigure Dorcas’s body at the funeral. Rodrigues sees Violet as “the one whose psyche has been deformed by twenty years in the City, so that people call her ‘Violent.”

Prior to her attempt to stab Dorcas at the funeral, in an incident that causes at least part of the community perceive Violet as crazy, she allegedly “steals” a baby from the charge of a young girl who had gone back into her house to get a record for her mother. When asked who took the child, the girl responds, “A woman! I was gone a minute. Not even one! I asked her… I said . . . and she said okay.”

Violet’s own relationship to reproduction has been over determined by the economics of slavery; her response to Rose Dear being tipped out of her chair by the men who took virtually all of her family’s belongings. Motherhood was simply not something she considered as a Possibility:

“The important thing, the biggest thing Violet got out of that was never to have children. Whatever happened, no sm dark foot would rest on another while a hungry mouth said, Mama?”

Violet’s marginal positions in the salon community operates as an analogue bothfor women such as Alice denouncing the disorderly, raucous, and sometimes revengeful lyrics of female blues singers like Gertrude, Ma Rainey and Bessie Smith, as well as for women’s peripheral involvement in early jazz performance. Violet is an unlicensed hairdresser, and thus not privy to the talk that takes place among the legally licensed beauticians all their customers at the salon.

Along with her “crazy” actions, Violet’s “wayward mouth” ostracizes  her from mainstream community circles of women and men, a situation perhaps analogous to the social unacceptability of the ‘dangerous’ sexually some classic blues lyrics. Her position as an outcaste, however, allows her intracuIt “double consciousness” for she is able to identify both Alice, an upstanding member of the community, and prostitutes at the same time because much as the sexually charged women’s classic blues allowed for the articulation and survival of an African American female communal voice,

Alice, however, does not want to hear about the connection between sexuality and violence in the urban African American community and the seemingly deterministic cultural narratives engendered by the economics of slave which are encoded in the classic blues “race record” to which the narrator subjects characters throughout the novel when Violet asks Alice why she does not want to hear about these women, she responds:

Both Violet and Alice have been subject to sexual jealousy of other women and the desire for revenge. Through their conversation Violet points out to Alice that she “wasn’t born with a knife,” asking if she had never “picked up”. It brings to mind the lynch the South which contributed to “the wave of black people running from want and violence”,

So we can say that the context of the female character in the novel is that of suppressed Black society. Nearly all the female Black characters are morally strong. Violet is the true representative spokesperson of strong willed ebony of the Afro-American Community.