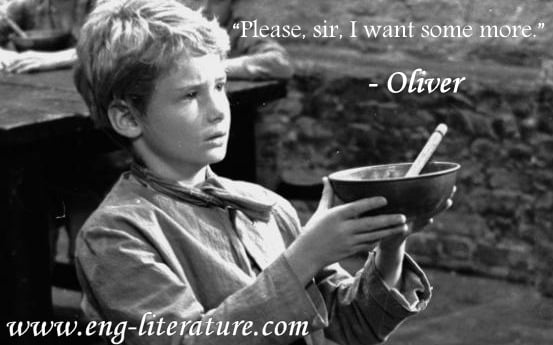 In his preface to the third edition of Oliver Twist, Dickens says “I wished to show in little Oliver the principle of Good surviving through every adverse circumstances and triumphing at last.” As the child hero of a melodramatic novel of social protest, Oliver Twist is meant to appeal more to our sentiments than to our literary sensibilities. If we appreciate Oliver, it is the propensity towards always being good and if we sympathise with him, it is for his being a deprived and orphan child.

Oliver, an orphan boy (son of Edwin Leeford and Agnes Flemming) is the kiddie protagonist of the novel. A dear, grateful, gentle child who “instead of possessing too little feeling, possessed rather too much.” He is also a link among three different worlds depicted in the novel – the workhouse, the crime world, and the world of the genteel middle class people. He is therefore more a symbol than a fully individualised character. In the opening sentence of the novel Dickens describes him as an “item of morality”. Dickens wanted to make him an instrument of exposing the inhumanity and the callousness of the workhouse and the underworld during the Victorian Era. He belongs to the class to which Huckleberry Finn and Becky Sharp belong. He is a mobile character and the novelist makes him freely come across the different cross section of the society.

When Oliver is born, the narrator tells us that he could be anybody—the “the child of a nobleman or a beggar”. But then the parish authorities step in, wrap him in the parish clothes that are like a uniform, and just like that, he is “badged and ticketed, and fell into his place at once—a parish child—the orphan of a workhouse”. Oliver’s name is an important marker of his identity, too: his mother dies before she can name him, and his father is dead before he’s even born. So again, it’s up to the parish authorities to name him, and Mr. Bumble chooses the name “Oliver Twist.” Mr. Bumble tells Mrs. Mann that the name was pretty much arbitrary—he just “made it up” because it was time for a “T” name. He doesn’t explain what the inspiration was.

From the very little description of Oliver’s appearance we come to know that he is delicate and handsome.  ‘Face is the mirror of mind’ is applicable in Dickens’ characters. He always looks innocent as he is innocent from inside. Bill Sikes is evil as he looks evil. The diabolical and sinister nature of Fagin is adequately reflected on his face, and so is Oliver’s innocence. Mr. Brownlow also does not need a second thought o convince himself of Oliver’s innocence.

Another point to be noted about Oliver’s character is that his virtue remains uncontaminated throughout the novel. Most of his life is spent under the care of scoundrels like Mr. Bumble, Mrs. Mann, the inconsiderate Mr. Sowerberry, the sneakish rogue Noah Claypole, the devilish Fagin and the odious Sikes. Anyone living under the shadow of the wicked characters would have either completely succumb or turned into a rogue himself.  “White” or even “Snow White” wouldn’t actually be a bad name for Oliver.

Apart from his almost incredible piety and irreproachable conduct, his one positive characteristics that is conspicuously in evidence in the early chapters in his courage. He is brave enough to approach to the board of Workhouse and makes his famous demand, “Please, sir, I want some more.” Further evidence of his courage is seen in Chapter III when he resists being apprenticed to Mr. Gamfield, the Chimney sweep and in Chapter VI when he gives a sound thrashing to Noah Claypole. But after he goes to London, he is almost swallowed by the circumstances and after this

“everything seems done to him and for him, almost nothing is done by him.”

Throughout the novel, Dickens uses Oliver’s character to challenge the Victorian idea that paupers and criminals are already evil at birth, arguing instead that a corrupt environment is the source of vice. At the same time, Oliver’s incorruptibility undermines some of Dickens’s assertions.