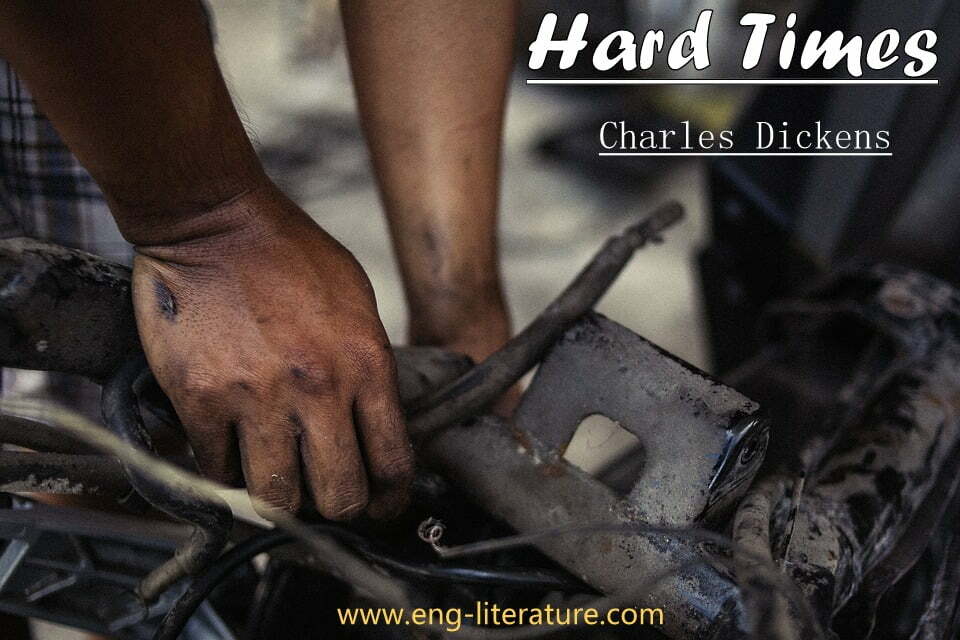 Dickens’ flair for expressing matters of common concern in his own style shows in the very title, Hard Times. The title usually suggest cliché or pun, the theme of human life count down by calculation and routine: for example, according to Cocker, “Hard Times is of hard heads and soft hearts”. A mare question of figure proves it. “Hard Times” is the phrase which came most naturally where weariness or hardship had to be voiced to the people with whom the novel is concerned: the men, women, and children whose lives were being transformed by the industrial revolution. It is very much a vernacular phrase common in folk song especially between 1820 and 1865 but not in the pamphlets, speeches and papers, however popular or radical.

“Hard Times” usually meant a period, often a slump where scanty food and low wages or unemployment bore particularly hard. Much less often it could meet the more pervasive state in which people felt that the essential condition of their lives confined them in inflexibility as in the refrain of a song from knitting mill of South Carolina around 1890:

“Every morning just at five

Gotta get up dead or alive

Its hard time in the mill, mu love

Hard times in the mill.”

In Charles Dickens’ novel Hard Times generated by the spirit quenching materialism of the Victorian Socio-economic ethos have been concentrated in Dickens prose view of William Blake’s “Dark Satanic Mills” – with their suspended smoke and the suppression of labour hazard. The industrialised image that haunts Dickens runs itself as though without the violation of the human beings. It nonetheless compels to attend.

“Time went off in Coketown like its own machinery, so much material wrought up, so much fuel consumed, so many powers worn out, so much money made.”

The compliment to the institutional practice in Coketown have been hinted  with the worker as they are reduced hands – “ A race who would have found more favour with some people, if providence had seemed fit to make them only hands, like the lower creature of the sea-shore, only hands and stomachs.” The individual crushed under the “crashing, smashing, tearing piece of mechanism is Stephen whose anguish and miseries are caused by his successive defeats by the law, by the trade union, and by his employer.”

Married to a woman of dipsomaniac habit, bore down by the demon power of the machine, socially boycotted and turned down by one and all, Stephen lives a life of abject wretchedness as the “hard time” prevailing in contemporary society. The graceful love of Rachael illuminates the gloom of his soul but cannot save his life which is pulled in pieces and has its deplorable end in the “old mine shaft.”

It is because of the hard times brought about by the industrial changes in the Victorian period that the method of ruling conduct in all works of life lacks sympathy, love and understanding. Agony of human beings is in the end not merely straight but bitterly destructive of all the moral virtues, beauty and everything that is based. The Boundary System of economics and the Gradgrind System of education have turned England into a rubbish- heft inhabited largely by slaves. Bounderby, a banker, merchant and manufacturer is as, F.R. Leavis rightly says in his “Analytic Note” in The Great Tradition, “Victorian rugged individualism in its grossest and intransient for a staunch adherent of the laissez-faire.”He is concerned with nothing buy self assertion of the monitory power and the materialistic success.

The Gradgrind elementary school offers no scope for the exercise of fancy and the Gradgrind home known as “Stone lodge” is never alive to the resonance of poetic creativity. The school encourages a well-crammed pupil like Bitzer (whose definition of a horse “quadruped, graminivorous, forty teeth namely twenty four grinders, etc.”). Dickens’ novel is indeed a protest against all repression of the human spirit by the classroom, the constitution, the law and the so-called principles of political economy.

The correctness of Charles Dickens’s choice of the title, Hard Times and of his judgement on the Victorian mode of life largely governed by the concept of individualism can hardly be questioned. As a social realist the novelist uses the popular phrases for a novel which is not about a time of special neediness but rather about a kind of bondage to routine facts and statistics with calculation s of simple and complex nature so integral to the culture of industrialised societies that such bondage is obviously Utilitarianism by nature. It is concept propagated by the populist government. It produces a mathematical and metallurgical system that does not attach any importance to Sissy Jupe who combines vitality with goodness and exerts a delightful fascination on our minds because she is “generous, impulsive… finding self-fulfilment in self-forgetfulness all that is the antithesis of calculating self-interest.” (F. R. Leavis).

The redeeming features of Dickens’ Hard Times the events concerning are indeed Sissy Jupe and to the sociology of man in an industrialised society – the exuberance of joy and happiness, spontaneity and warmth of creative impulse.