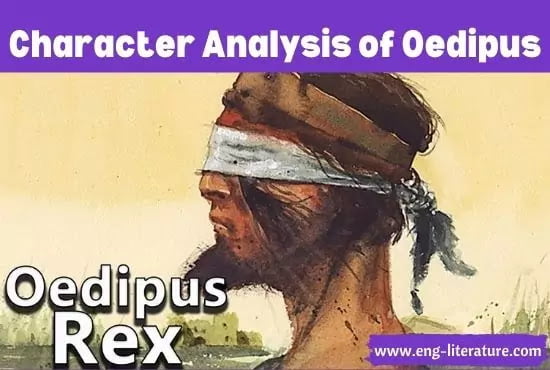 “Oedipus“, says Victor Ehrenberg, “is the good ruler in spite of his defects, and Creon the bad ruler in spite of his virtues.” Oedipus, in spite of his having murdered his father and committed incest with his mother commands our respect and compels our admiration. The victim of a mistake, Oedipus compares favorably with Shakespeare’s King Lear or Milton’s Samson, and we feel tempted to say that he is more sinned against than sinning. He has been chosen by Aristotle in his Poetics to be the best tragic hero, because he is great and glorious, and because he is not “preeminently virtuous or just.”

Oedipus does not have unblemished goodness, but he is no doubt essentially great. He is, like King Lear, every inch a King. As the plague-stricken Athenians once came to Pericles, so also the Thebans approached Oedipus, who was the symbol of patriotic fervor and kingly dignity. It should be remembered that Oedipus was a king, and not a tyrant. He was conscious of his greatness. At the beginning of the play he said:

Whose name is known after.”

Oedipus was no tyrant, because he did not rob anybody of the throne. The Thebans offered him the crown as a mark of gratitude to him for having solved the riddle of the Sphinx and saved the people. The Thebans looked upon him as their saviour. Oedipus in his turn said:

“Where of I would not hear the tale, my children,

From other lips than yours, Look ! I am here.”

It would be no exaggeration to say that Oedipus looked upon his kingdom as a large family, of which he was the head. A benevolent king, he knew at the same time that he must not be a weakling. He, therefore, knew how to command.

“You have prayed; and your prayers shall be answered with

help and release If you will obey me, and are willing to put in hand

The remedy your distress requires.”

Oedipus was always willing to share with his people their weal and woe, their joy and sorrow. And hence he said:

“Well I knew the hurt whereby

You are all stricken-and not one of you

So far from health as!”

The relation that existed between the ruler and the ruled was not one of mere fear and respect. It was one of affection as well:

“I give for you my children. Believe me, I know

And while you suffer, none suffers more than I.

Oedipus completely identified himself with his people.”

He did not tell them with pontifical solemnity that he would do everything. He had what the ancient Greeks called piety; i. e., devotion to the gods. And that is why he had laid the case before the gods, and was anxiously expecting a reply from Delphi.

But as soon as Creon came we find a different Oedipus altogether. He lost his temper in relation to both Tiresias and Creon. As Tiresias, the blind prophet came there, Oedipus addressed him with dignified courtesy. But later on he charged Tiresias with conspiracy with Creon ::

“I tell you I do believe you had a hand

In plotting, and all bur doing this very act.

If you had eyes to see with, I would have said

Your hand, and yours alone, had done it all.”

Oedipus crossed all bounds of decency, decorum and humanity in his behaviour with Creon as well. And there he certainly suffered from the chastisement of hubris. He roundly asked him;

“What brings you here?

Have you the face to stand before my door,

Proved plotter against my life, thief of my crown?”

In all these scenes Oedipus was almost on the verge of tyranny. Having been used to undivided authority, he was liable to pride presumption, and aggressiveness. He became a victim of hamartia. Like Lucifer before his fall, Oedipus also thought of himself as a divine being. In his relation to Creon he was as presumptuous as Creon was to others in Antigone. He lost all self-control and was inclined to hasty inferences. His piety failed as he thought of his monarchical prerogatives. Self-confident pride was his chief trait of his character even before he had ascended the throne of Thebes.

Oedipus had inordinate pride in his intellectual attainments. It is this pride that made him think of himself as even superior to the gods. But with all his pride and insolence, he was a relentless and persistent seeker of truth. He must know all about himself. In spite of the repeated entreaties from Jocasta, who realised the grim truth in advance of him, he pursued his course steadfastly.

A responsible king, Oedipus was a loving and devoted husband. A person who could not, in normal circumstances, curb his passion was amenable to reason as he was in touch with his wife. As she asked Oedipus why he had conceived such a terrible hatred against Creon, he readily replied that he would answer the question :

“You are more to me than these goad men.”

Here we feel that the proud egotist had a heart throbbing with warmth and passion for a woman of all women. He had love and respect for her. He shared the glory of the throne with his partner. He told Creon:

“All that she can desire is hers by right.”

It means that Oedipus had completely identified himself with his wife. In thought and action, and in life they were indivisible. As soon as she requested her husband to be kind to Creon, he readily yielded.

It was pride and anger that made him kill his father. It would not be out of place to mention what Shakespeare says in King Lear:

And out of our pleasant vices

Make instruments to plague us.”

Oedipus with all his noble qualities became the slave of the passion of anger, which brought about his tragedy. He became a bully in his treatment of Tiresias and Creon. He feared that both of them had plotted to dispossess him. It was an utterly baseless fear, and yet Oedipus was about to kill Creon. Jocasta intervened and Oedipus gave up his murderous design.

Angry and proud, aggressive and confident, Oedipus was torn in a bitter conflict between truth and illusion. A drowning man that he was, he was catching at a straw. He lost his reason, and did not know what he should do. All the while the words of Tiresias- Thou seekest, and thou art, the murderer”, were haunting him like a spectre. To allay his misgiving, Jocasta said, Laius was killed at the crossing of the three roads. It was then that Oedipus’ suspicion was almost confirmed. In an agony of doubt, he puts a series of questions to his wife. Time, place, circumstances all appeared to agree, and the proud and self-confident. Oedipus was at the end of the tether.

But still he was clinging to hope. A messenger came from Corinth and informed him that his father Polybus was dead. It was the last flicker of the dying hope. But the hope was short-lived. The messenger told him that he was a foundling exposed on Mount Citheron. And as his last question–“who was the mother from whom the shepherd had received that child?” was answered by the messenger, there was no more hope to cling to. All his pride was humbled down. He was reduced to dust and ignominy. The chorus cried out:

Living I count your life as nothingness.

None hath more of happiness,

None that mortal is, than this:

But to seem to be, and then,

Having seemed to fall.”

The man, who had once been a tower of defence of the Thebans was reduced to abject suffering and utter helplessness. The man who was the fit representative of God on earth was irrevocably doomed. He realised that he was tied fast to the wheels of a cruel necessity.

Husband of mother, is my name ;

That is not spoken of Oedipus?”

Here called with remorseless tenderness the woodlands of Citheron;

“Citheron! Foster-mother ! Did you shelter me

For this ? could you not let me die that instant,

Instead of saving me to tell the world

How I was got”

The man, who always commanded, made his last appeal to Creon to bury Jocasta. His sons could take care of themselves. But for his daughters he had tender solicitude, and requested Creon to look after them. As for himself:

“Cast me away this instant

Out of this land, out of the sight of man.”

He then embraced his daughters, for whom a cursed life was waiting. They would have neither their parent’s love nor their husbands’ affection. Oedipus became a lesson for not the Thebans only but for humanity. The last song of the chorus sums up Oedipus’ fate:

Sons and daughters of Thebes, behold; this was Oedipus; Greatest of men : he held the key to the deepest mysteries’ Was envied by all his fellow-men for his great prosperity; Behold, what a full ride of misfortune swept over his head, Then learn that mortal man must always look to his ending, And none can be called happy until that day when he carries His happiness down to the grave in peace.

On an analysis of the last scene of Oedipus Rex, we are constrained to feel that Oedipus retained his greatness right up to the end. Even in a state of hysterical grief he did not lose his reason or even intelligence. The Oracle said that the polluter of the land must be banished or killed. He, therefore, ordered Creon to banish him without further delay. He was still impatient. The chorus said to him that “this act [of blinding himself) was ill-advised”, to which Oedipus replied with dignity and authority:

“Teach me no other lesson.”

Oedipus was still concerned about the plague-stricken city. He, therefore, insisted on the banishment of the murderer of Laius, i. e. himself. It is only after his banishment that the city would be purged. It would be no exaggeration to say that Oedipus became a martyr to the cause of his country.

Even when appealing to Creon for showing his pity to the fatherless daughters, he had a note of command in his voice;

“Take care of them, So, young, so lost to all but you.

You will do it? your hand to pledge your promise.

Towards the close of the play.”

Creon wanted the children to be separated from the father. Oedipus growled;

“No I never take them from me.