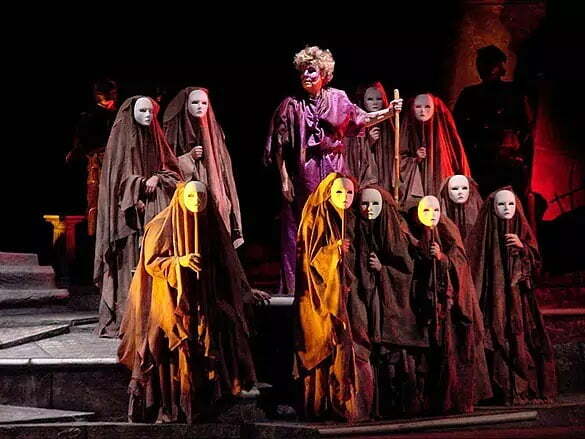 Role of Chorus in Tragedy

According to Encyclopaedia Britannica

“The chorus in Classical Greek drama was a group of actors who described and commented upon the main action of a play with song, dance, and recitation.”

Choral music is interwoven into the drama to develop a deeper sense of emotional urgency, to express meaning emotionally rather than simply logically. Of course, Greek tragedies are cool and Broadway musicals suck, but that’s a different subject. Most modern lyrical music (as in music with lyrics), whether it’s pop, rock, metal, hip-hop, country, whatever, also continues the tradition of using a chorus to further develop verse.  So thinking about the role of a chorus in modern music should help us understand the chorus in tragedy: it is essentially the same.

The origins of the chorus in particular may have stemmed out of ancient rites and rituals with elements of song and dance, and most importantly – the gathering of people. One of the ingredients of Tragedy as specified by Aristotle is thought. Chorus is one of the principal vehicles of thought. Tragedy arouse out of the chorus, whether Dithyrambic or some other sort.

Chorus, however, plays different role in different tragedies. It is the protagonist in in The Suppliants. In the Prometheus Bound and the Agamemnon, the chorus is the sympathetic observer rather than an active participant. In The Choephorae, it takes a minor share in the action of misleading Aegisthos, but in The Eumenides, the chorus is a prominent participant in the action.

In Aeschylus’ “Prometheus Bound”, the chorus is composed of Oceanids (nymphs from the ocean, the children of the sea god Oceanus and his wife Tethys). Aeschylus changed the role of the chorus which brought criticisms from Aristotle who his Poetics suggested that “he diminished the importance of the Chorus” (Aristotle 5), and by more modern writers such as H. D. F. Kitto who in his Greek Tragedy: A Literary Study writes

“Aeschylus arranges things differently. He makes the chorus do what Greek choruses are supposed never to do: to take a part in the action.”

In the works of Nietzsche the chorus takes on a completely new and profound philosophical meaning. In his The Birth of Tragedy Nietzsche presents a view of a distinct dissonance between what he calls the Apollonian and the Dionysian paradigms, referencing to the dramatic and choral qualities of Greek drama respectively. In a metaphysical framework the chorus is the essence of the play and embodies a certain Dionysian consciousness which deals with the primal realms of the human condition.

The use of the Chorus in Elizabethan plays derives ultimately from its use in Ancient Greek drama. In Shakespeare’s King Henry V (1599), for instance, a play which includes military sieges and battle scenes, the Chorus is used to ask the audience to exercise their imaginations to conceive of such vast doings taking place in so small a theatre. Marlowe employs chorus in Doctor Faustus for a number of functions.

In the modern theatre chorus has become almost of no use. G. B. Shaw has used prefaces and elaborate stage directions which serve the purpose of the Greek chorus.

The chorus comments on the action in lyrical speeches. Thus they add lyrical splendour to the drama and help in transforming horror and pain to beauty and music. It also knows the past, observes the present and has shrewd sense of the future. It participates in the action in the sense that it suffers it consequences.

Aristotle says in his Poetics that chorus “should be an integral part of the whole, and take share in the action.” But in the Problemata he admits that “action is not fitting for the chorus”. The main function of chorus is dancing and singing. Twelve or more persons always standing on the stage can not effectively participate in any action. They interfere with dramatic probability and movement. It has been rightly said that the chorus contributes

“in some degree to the progress of the action, by active offices of friendly assistance as, for example, in the Philoctetes, and the Ajax of Sophocles”.

8 thoughts on “Role of CHORUS in Tragedy”