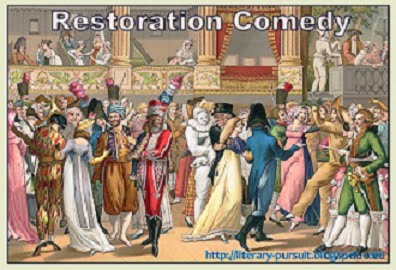 The drama, especially Comedy of Manners proved to be one of the most important genres in the Restoration Era. It started developing after reopening of the theatres in 1660. The cynical decadence of the age was alien to the spirit of the Elizabethan romantic comedy. However, Restoration comedy was indebted to the Jonsonian school as well as to Beaumont and Fletcher. The continental influence was also strong; especially those of Moliere and Calderon.

The Restoration comedy is called comedy of Manners as it presented the superficial habits and manners of only a section of the society – the elegant aristocracy with their vices, intrigues and outward glamour of polished behaviour. The manners displayed were the affections and the cultured veneer of the society. Amorous intrigue played a very crucial part in the action of the drama. As an artistic piece of literature, the Restoration comedy of manners mirrored the dilettante society of the day.

The exquisite poetry of Elizabethan comedy yields place to prose in Restoration comedy, the poetry being reserved for the more rapturous moments. The main plot is very often accompanied by sub-plots, sometimes more than one, all revolving around the extra-marital affairs and sexual intrigue.

In the comedy of manners the passion and emotion are replaced by a rapier-sharp wit with a crystalline polish and hardness. Bonamy Dobree called this bonanza of wit ‘verbal pyrotechnics’. Dr. Johnson calls the characters ‘intellectual gladiators’. The scintillating dialogues with its quick repartees and discussions of marital relations reflect the contemporary social milieu.

Restoration comedies dealt exclusively with the social elite and were town-based. Hazlitt commented about Restoration Comedy, ‘What a rustle of silks, and waving of plumes!’ They usually had London or some other fashionable resort like Bath as their locale.

The playwrights who practised the comedies of manners in the Restoration age were William Congreve, George Etherege, William Wycherley, Thomas Shadwell, Sir John Vanbrugh, and Fraquhar.

Studying the social pressures on love and marriage with wit and subtlety Congreve shows himself the master of restoration comedy. His comedies are The Old Bachelor, The Double Dealer, Love for Love, The Way of the World. Congreve’s brilliance lies principally in depicting the cross-current of marital complications.

George Etherege’s comedies blazed the track upon which Congreve ventured. His major comedies are The Comical Revenge or Love in a Tub, She Wou’d If She Cou’d, The Man of Mode or Sir Fopling Flutter. The brilliance and the grace of Etherege’s dialogues conceal the weakness of his plot- construction.

These same features mark the comedies of Wycherley. Within five years he has produced five plays – Love in a Wood, The Gentleman Dancing Master, The Country Wife, The Plain Dealer etc. of which the last two are termed as ‘manly’ and ‘a gross exposure of human weakness’.

Vanbrugh was an architect, but as a dramatist he was extremely popular. His famous comedies are The Relapse, The Provoked Wife, The Confederacy etc.

Shadwell came from a good family and was an out and out Whig. He was a prolific author. His best know plays are The Sullen Lovers, Epsom Wells, Bury Fairs etc.

Farquhar’s comedies include Love and a Bottle, The Constant Couple, The Beaux Stratagem etc.

According to Charles Lamb “Restoration comedies are a world of themselves almost as much as fairy land.” Macaulay severely criticised him. Dobree argued that the distinguishing characteristics of the Restoration comedy down to Congreve is that it is concerned with an attempt to rationalise sexual relationship.

In spite of these criticism and condemnations it has to be admitted that the dramatists of the Restoration period reflected the manners and modes of the society courageously. Without doubt the Comedy of Manners was revived by Sheridan and Goldsmith in their comedies – The Rival, The School for Scandal and She Stoops to Conquer.

2 thoughts on “Notes on Restoration Comedy or Comedy of Manners”