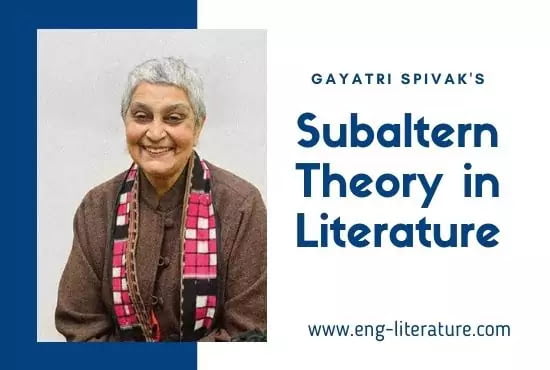 Gayatri Chakravorty Spivak is one of the major modern post-colonial theorists. She describes herself as a para-disciplinary, ethical philosopher. She became quite famous as a translator and for her preface to Derrida’s Of Grammatology (1976). She says:

“My position is generally a reactive one.

I am viewed by Marxists as too codic,

By feminists as too male-identified, by

indigenous theorists as too committed to

Western theory. I am uneasily pleased by this.”

Gayatri Spivak was born in Calcutta on 24th February, 1942. Her parents were metropolitan middle class people. She belongs to the first generation intellectuals after independence. She did her B.A. in English from the university of Calcutta and M.A. from Cornell University and Ph.D. from Iowa University in the USA. Her dissertation for doctorate was on W.B. Yeats. In 2007, she became a university professor at Columbia University. She won the Kyoto Prize in Arts and Philosophy in 2012. On December 21, 2014, Spivak was conferred an honorary D. Lit degree by Presidency University, Kolkata.

Her major works are as follows:

The term “Subaltern”, means the people “of inferior rank or status”. In critical theory and postcolonialism, subaltern refers the populations that are socially, politically and geographically outside the hegemonic power structure of the colony and colonial homeland. Subaltern classes may include peasants, workers and other groups denied access to hegemonic power.

In describing “history told from below”, the term subaltern is derived from Antonio Gramsci‘s work on cultural hegemony, which identified the groups that are excluded from a society’s established structures for political representation and therefore denied the means by which people have a voice in their society.

Gayatri Spivak‘s important contribution is in her Subaltern Studies. The concept of the “subaltern” gained increased prominence and currency with Gayatri Spivak’s Can the Subaltern Speak? (1985)

The terms subaltern and subaltern studies entered postcolonial studies through the works of the subaltern studies group, a collection of South Asian historians who explored the political actor role of men and women who comprise the mass population rather than the political roles of the social and economic elites, in the history of South Asia. Marxist historians have been investigating colonial history as told from the perspective of the proletarian: using the concept of social classes as being determined by economic relations.

In 1970s, subaltern began to denote the colonized peoples of the Indian subcontinent and described new perspectives of the history of an imperial colony as told from the point of view of the colonized rather than the colonizers. In 1980’s the scope of enquiry of Subaltern Studies was applied as “an intervention in South Asian historiography”. The term subaltern is still problematic and it is used in the fields of history, anthropology, sociology, human geography and literary criticism.

Scholars of subaltern hoped to break away from the histories of the elites and the Eurocentric bias of current imperial history. They wrote against the Eurocentric school which upheld the colonial legacy. The primary leader of this group was Ranjit Guha. Gayatri Spivak is another major scholar of subaltern studies. She draws on a number of theoretical positions in her study. She refers to deconstruction, feminism and Marxism. She is highly critical of Indian history told from the point of view of colonizers. These scholars of subaltern studies wanted to reclaim their history. Proponents of Subaltern Studies suggest that we need to find alternate sources to locate the voice of subalterns. The subaltern history will help to reveal the previously covered histories, hidden secrets of the past and neglected events.

The important concept in subaltern studies is the binary opposition of self and the other. The other is constructed outside the nation. Otherness is negated by the colonizers which becomes the subject of their superiority and domination.

“Subaltern is not just a classy word for ‘oppressed’, for the other, for somebody who’s not getting a piece of the pie…. In post-colonial terms, everything that has limited or no access to the cultural imperialism is subaltern-a space of difference. Now who would say that’s just the oppressed? The working class is oppressed. It’s not subaltern… Many people want to claim subalternity. They are the least interesting and the most dangerous. I mean, just by being a discriminated against minority on the university campus; they don’t need the world ‘Subaltern’. They should see what the mechanics of the discrimination are. They’re within the hegemonic discourse, wanting a piece of the pie, and not being allowed. So let them speak, use the hegemonic discourse. They should not call themselves subaltern.”

In analyses of specific historical contexts, Gramsci refers to slaves, peasants, religious groups, women, different races, the popolani (common people) and popolo (people) of the medieval communes and the proletariat. For Gramsci too, subalternity is not limited to class relations. It is constituted through exclusion, domination and marginality of various forms.

Gayatri Spivak says that the term has undergone a change. She writes

“I like the word subaltern for one reason. It is truly constitutional. Subaltern began as a description of a certain rank in the military. The word was used under censorship of Gramsci: he called Marxism monism and was obliged to call the proletarian ‘subaltern’. That word, used under duress, has been transformed into the description of everything that does not fall under strict class analysis.”

Gayatri Spivak‘s line of reasoning has been developed in Geographies of Post-Colonialism (2008). It has been proposed that Western intellectuals relegate other, non-western (African, Asian, Middle-Eastern) forms of knowing,-of acquiring knowledge of the world. They relegate it to the margins of intellectual discourse, by re-formulating said forms of knowing as myth and folklore. Therefore, in order to be heard and known, the subalterns have to adopt western ways of knowing (thought, reasoning, language). They also have employed the Western way of expressing and even learning their language.

Thus, subalterns are the people silenced in the administration of the colonial states they constitute. Their voice can be heard by means of their own political actions effected in protest against the discourse of mainstream development. Thereby, they can create their own, indigenous forms of modernization and development.

Gayatri Spivak cites the work of the subaltern studies group as an example of how this critical work can be practical, not to give the subaltern voice but to clear the space to allow it to speak.