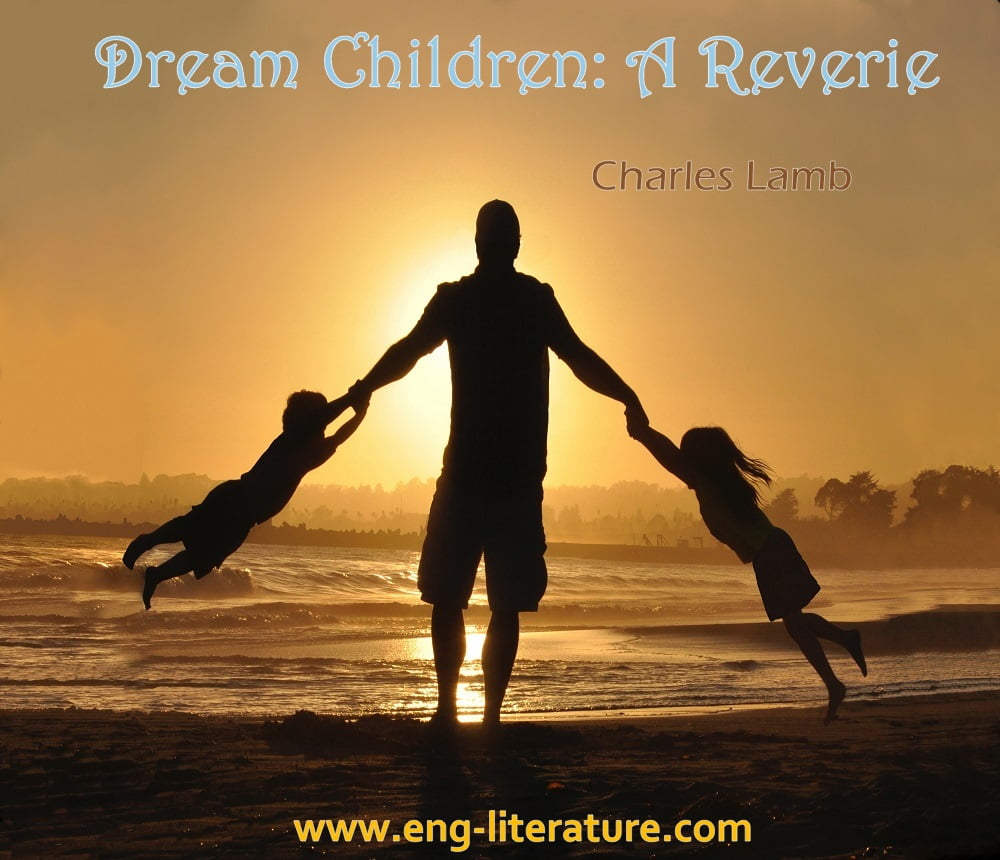 Humour and Pathos in Dream Children: A Reverie

Wordsworth’s “Lamb, the frolic and the gentle” was a refined humorist whose smile could be both satirical and tender. In him humour and pathos are, indeed, very often allied. Lamb could not prevent his mind from passing at times to the sadder aspects of life, and there is belief that he laughed to save himself from weeping. Laughter is followed by tears of sympathy in many of his essays. In fact, Lamb’s personal life was full of disappointments and frustrations. But instead of complaining, he looked at the tragedies of life, its miseries and worries as a humorist. Dream Children: A Reverie is a true testimony of his blending of humor and pathos in a single row.

The whole essay permeated with a note of heart sob. With the “viewless wings of poesy” he journeys back to the good old days and pops up stories in front of his dream children. He relates his childhood days, of Mrs. Field, his grandmother and John Lamb, his brother. He describes how fun he had at the great house and orchard in Norfolk. Of his relations he gives us full and vibrant pictures – his brother John (John L-), so handsome and spirited youth, and a ‘king’. John was brave, handsome and won admiration from everybody Charles’ grandmother Mrs. Field is the other living picture. She was a good natured and religions – minded lady of respectable personality.

Charles Lamb’s sweet heart Alice Winterton is the other shadowed reality. The Dream Children, Alice and John are mere bubbles of fancy. Thus Lamb’s nostalgic memory transports us back to those good old days of great grandmother Field. But even in those romantic nostalgia the hard realities of life does not miss our eyes. Death, separation and suffering inject us deep-rooted pathos in our heart. Whereas Mrs. Field died of cancer, John Lamb died in early age. Ann Simmons has been a tale of unrequited love story of Charles Lamb. Notably the children are millions of ages distant of oblivion and Charles is not a married man but a bachelor having a reverie.

In his actual life Lamb courted Ann Simmons but could not marry her, he wanted to have children but could not have any. Thus he strikes a very pathetic note towards the end of his essay when he puts the following word in front of his imaginary offspring:

“we are not of Alice, nor of thee, nor are we children at all … We are nothing, less than nothing, dreams. We are only what might have been”.

In any well-balanced piece of writing, humor is supplemented to pathos. Our present essay also appropriates this trademark features. Lamb’s widowhood and parenthood both arouse laughter and sorrow. But the most exuberant source of humor is his fictitious creation of children. In fact, the subtitle of the essay – ‘A Reverie’ which literally means a daydream or a fantasy – prepares us for the pathos of the return to reality although the essay begins on a deceptively realistic note.