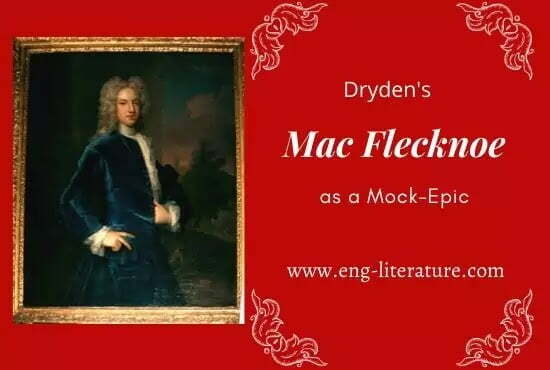 Mac Flecknoe as a Mock-epic

An epic is a narrative in poetry of some heroic action of a heroic character, written in a language which corresponds to the elevated theme. A mock-epic parodies the style and conventions and characters of a serious epic. The parody is not meant as a mockery of the epic, but is a mean to ridicule some object which the poet wishes to satirize. Seriousness of style forces one’s attention all the more on the triviality of subject. The manner is exalted but the thing described is insignificant.

How is Dryden’s Mac Flecknoe as mock heroic poem?

One can assign to Dryden’s Mac Flecknoe the position of heralding mock-heroic tradition in English poetry. Dryden considered the mock-heroic technique as a very suitable form for satiric purposes. He took inspiration from the French poet Boileu’s Le Lutrin in which he found a fine mixture of the majesty of the heroic and the bite of the satire. Mac Flecknoe is thus a satire in the mock-heroic technique. Finding himself with the task of having to demolish Thomas Shadwell, Dryden could not have chosen a better method of satire.

Mac Flecknoe has a mock-heroic form. The basic action, though it is not a great complex one, could easily fit heroic poetry. It deals with the choice of a successor to a kingdom and a coronation. The “mockery” is evident when we realise that the Kingdom is that of Nonsense and the coronation is that of a Prince of Dullness.

The very opening of Mac Flecknoe is characterized by epic exaltation with the resulting comic effect:

“All human things are subject to decay

And, when Fate summons monarchs must obey.”

The opening lines have the ponderous ring of noble heroic poetry. It is the sixth line that the deflation comes. Flecknoe had ruled unopposed – in the “realms of Nonsense absolute.” An aged monarch now sought to abdicate and find a suitable heir to his throne. The exalted tone contrasts ludicrously with the fact that Flecknoe was a symbol of inferior versifiers.

Dryden was a great master at mixing and balancing the majesty poetry and the venom of satiric verse. What high-flown words are used to achieve the very opposite effect, i.e. the deflation of the Mac Flecknoe. He shows ability at using “magnificent abuse”. Flecknoe speech is fraught with ironical praise:

“Success let others teach, learn thou from me

Pangs without birth, and fruitless industry.”

The direct abuse is couched’ in notes of smooth politeness with the help of the polished heroic idiom. Terms such as “Empress Fame,” “the nations meet”, “the renown of Shadwell’s coronation” sound dignified and solemn. Dryden makes a clever use of words. This is especially so in the lines which describe “the hoary prince” sitting majestically on a throne built of his own efforts, i.e., his own worthless books, and the loads of Shadwell “almost choking” the way to the throne. The mock-heroic idiom makes use of irony in an effective manner.

Devastating Weapon of the Mock-Heroic

Ironical politeness is the basic aspect of the mock-heroic technique and is used with telling effect in Mac Flecknoe. Mac Flecknoe is Thomas Shady Nonsense. The polite tone of praise is devastating in its satiric effect when Flecknoe declares that Shadwell alone of all his sons was “mature in s from his tender years and stood confirmed in stupidity. Others sometimes allow a ray of intelligence into the darkness of their stupidity, but not so Shadwell. He was supreme in his dullness and ‘rising fogs’ ensured an eternal lack of wit. The manner is often like Milton’s, but the effect is satirical.

Deflation through the Process of Elevation

The aim of the mock-heroic form is to deflate a victim by enhancing him. Dryden never belittles Shadwell. He constantly enhances his victim – he calls him Prince, monarch, mature, etc. By using Elevated words, ideas and images for Shadwell, Dryden reduces him to a helplessly ridiculous level.

Mac Flecknoe is a “pseduo-hero”, heroic only in bulk. The comparison of Shadwell with the “monarch oaks” which “shade the plain and supinely reign” is intended to expose the hollowness of Shadwell. Like the heroes of the genuine epic, Shadwell is “stamped” on his surroundings: the low quarters London form a fitting background, or universe for our “hero.” He is fit for the place,

“Where their vast courts the mother strumpets keep,

And, undisturbed by watch, in silence sleep.”

The hero’s hollowness seems to echo from the corners of “Pissing alley” and “Aston-hall” – the sordid places of London.

Comparison with Heroic Figures for Deflation

Much of the deflation in mock-heroic poetry is achieved through the clever device of drawing parallels between the satiric object and legendary heroes. It is the “joyful business of comparing small men to giants and making pigmies of them in the process,” as Ian Jack comments.

Flecknoe is solemnly compared to Augustus, the great Emperor of Rome. The comparison does not enhance Flecknoe; it deflates him. Similar is the effect when Shadwell is compared to Arion, the legendary Greek musician. Arion jumped out of his ship when threatened by murderous sailors. His music charmed even the dolphins, one of which carried him on its back safely to the shore. Shadwell, however, can only attract “little fishes” as he travels along the Thames in a barge.

Shadwell is compared to Ascanius, Rome’s other hope and pillar of the state. He is compared to Hannibal, the hero of Carthage. But whereas Hannibal swore eternal hostility to Rome at the early age of nine, Shadwell swears to wage perpetual war on wit and intelligence. If Romulus, the great founder of Rome, saw twelve vultures as an omen, Shadwell’s coronation is marked by the portentous flight of twelve owls.

Mock-heroic style is exemplified in the lines which describe the setting of Shadwell’s coronation. Pomp and show mark the scene. London is termed “fair Augusta” where “an ancient fabric” rose to the sight.

The Ending of the Poem: Culmination of Mock-Heroic

The speech of Flecknoe comes to an abrupt end and a miraculous disappearance of the speaker takes place. Two heroes from Shadwell’s The Virtuoso pull a trap-door beneath Flecknoe and he disappears. The scene is an obvious travesty of the Biblical story of Elijah and Elisha.

Mac Flecknoe, though not a mock-epic in the strict sense of the term, uses the mock-heroic technique very effectively for satirical purposes. The elegant diction contributes to Shadwell’s caricature. The absurdity of the inflated speeches is obvious. We have solemn descriptions of omens, ponderous genuflections to the bad writers, and the empty ring of rhetorical gesture:

He paused, and all the people cried “Amen.”