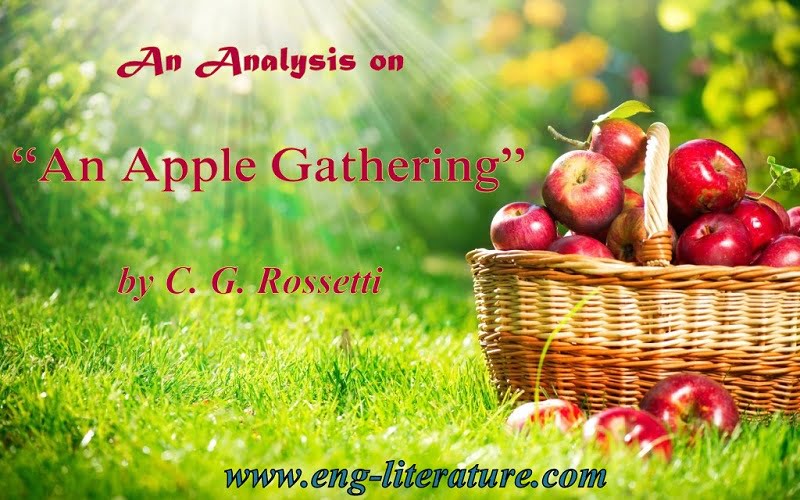 Like Rossetti’s another magnificent feminist creation, Goblin Market , “An apple gathering” is a study of an allegorical fable. There are many various hidden or underlying meaning behind the simple sad story of a girl being disappointed just because she could not get any apples. First of all the story reflects the typical Victorian society who does not allow women a little freedom. The significance of apples comes from the Garden of Eden, were the forbidden fruit was consumed; however, the narrator in this poem plucks the pink blossoms instead, which can suggest the act of impatience (sex before marriage). However, we can suggest that the narrator here chooses to capture the beauty of life or emotional happiness rather than sexual pleasures. The so-called patriarchal society labeled her as a “fallen woman”:

“I plucked pink blossoms from mine apple-tree

And wore them all that evening in my hair;”

The color pink is associated with flay fullness, innocence and feminism which shows that Rossetti here emphasized with the narrator’s melancholic feelings and harsh treatment by society. Then there is a very important phrase ‘due season’ which obviously is the symbolism of the time after being betrayed. So, finding no apples in the tree in due season tells the story of the speakers finding herself aloof from her chastity after the betrayal of her lover. The phrase ‘dangling basket’ here symbolizes the dangling condition of the speaker. After losing her chastity, the life of that girl usually has no particular way, no particular standpoint and no particular future.  So this betrayed girl will have to face so many ill treatments and mocking when she will pass the ‘self-same track’.

In the third stanza, the narrator suggests ‘Lilian and Lilias smiled in trudging by’. The two names symbolize purity as they come from the flower lilies. The idea of them ‘trudging by’ can show how her pureness has been lost due to her acts and the fact that

‘their mother’s home was near’ reveals the fact that they must be on their journey to become mothers and this is why they are considered to be pure in a society’s perception. Those girls may have lost virginity like her and carrying a child in their womb but they are not victims of betrayed love like her. Moreover, there is an authentic use of pathetic fallacy when it is said that the ‘heaped-up basket’ is teasing the speaker ‘like a jeer’.

The next stanza again taunts the narrator for her acts because it says ‘Plump Gertude passed me with her basket full’, whereas out narrator is left with none, at this point we might understand that apple at this stage symbolizes knowledge, fertility and joyness which can only be consumed by married woman. The reason for her ‘basket full’ was because she had a ‘stronger hand’ which could suggest the physical support of her husband. Rossetti now reflects how society viewed married woman in contrast with fallen woman.

The introduction of “Willie” was expected as in many of Rossetti’s poems she uses men as the cause for women’s downfall. For example in the Goblin Market the “goblin men” are the ones who lure Laura. Willie is a Scottish name which means determined protector. However, his name contrasts with his actions because we learn that the narrator’s ex-lover has left her because he valued his reputation more than the love of his beloved. Interestingly, Rossetti did have an affair with a Scottish poet called William Bell Scott and according to many critics; it is known that Rossetti referred William in many of her poems. So the emotional side of an apple Gathering could reflect the actual experience of Rossetti in real life.

In the concluding stanza, the apples are related to earthly desire; the narrator seems to ask her lover if he valued the earthly desire more than her love. Rossetti also includes the word ‘stooped’ which shows how the lover must have picked up the narrator like a fallen apple and when he made use of her, he abandoned her. Rossetti here highlights the downfall of morality and collapse of relationship between a man and a woman. Her idea must have been that even though, the mistake was coming from the male’s side, it is the woman that suffers the consequences and she is left to be ‘loitered still’.

The ending of the poem makes us sympathize with the narrator because she is left to be all alone without any hopes to return back to normal. This poem proposes the inner emotional struggle of ‘fallen woman’ in society.