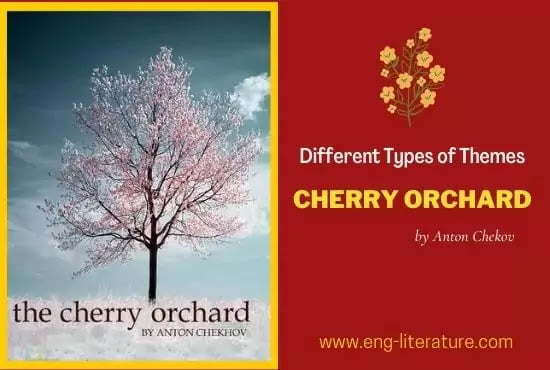 Anton Chekhov’s play The Cherry Orchard is about the growth of middle class in Russia and the fall of the aristocracy. The play describes how an aristocratic family has to sale its famous estate – cherry orchard; and how an ordinary man who had been serving this family as a serf for generations, purchases this orchard. Lyubov and her brother Gayev were unable to find a way as to how to cope up with the new social order of Russia, whereas Lopakhin, their servant takes the advantage of the situation and replaces those who once ruled over him.

The liberation of Russia’s serfs by Tsar Nicholas-II brought about a great social change in Russia. Many aristocrats fell on hard times and some of the hardest working serfs rose high. The best examples of this social change are the characters of aristocrats. Mrs. Ranevsky has failed to manage her cherry orchard. Her mortgage payment is due and she does not have enough funds to cover the payment. Whereas, her former serf, Lopakhin, a shrewd businessman, makes himself able enough to purchase her estate.

On the other hand, several other characters of the play seem to be frozen in the same world of servitude. They have no opportunities for mobility and social advancement. For example, Firs and Trofimov, both question at the utility of Liberation. They are unable to differentiate between social change and social progress. Firs is the living proof of social discrepancy. Though society has changed, yet his life, and the lives of countless others, have not progressed. Both characters believe that the Liberation is not enough to constitute progress. The play leaves the impression that while change change has come, there is more work to be done.

The play deals with the theme of independence many different ways. The characters demonstrate, differ degrees of freedom resulted from liberation. The character a Lopakhin and Firs are at opposite ends of this freedom. Lopakhin takes advantage of his liberation and succeeds in making himself independent. Whereas, Firs, though free, yet he has not changed his position at all and is subject to the whims of the family he serves, as he has always been before his freedom.

The difference in their situation demonstrates that constitutionally a group of people has been liberated but they are not equipped with the skill and training needed to be independent, such as, education, free will and a piece of land. But Trofimov an idealist feels himself free. He refuses Lopakhin’s offer of money because he feels himself ‘a free man’. He says to him,

Nothing that you value
has the smallest power over me.

Similarly, though Anya has been brought up amidst aristocratic splendor, yet she has a mind of her own. Madam Ranevsky is also not free, but in a different way from Firs, she has not enough income to be able to control her own destiny, she is a slave to her passions and makes poor decisions in romance.

Theme of Passivity and Inactivity

Passivity and inactivity is the trademark of the nature of many characters. For example Mrs. Ranevsky, her daughter, Anya and her brother Leonid Gayev are very passive, they ring themselves unable to change the course of their worse circumstances. Mrs. Ranevsky gives up effort to save her estate and resigns to her fate. She goes out to expensive restaurants buys gifts, gives tip to the waiters, lends money to neighbour, and gives a gold coin to bagger. She remains passive and allows the auction to take place. Gayev, Anya Varya also become passive and continue to believe everything will be good. She and her brother do nothing to avert the auction but remain passive hoping for miracle. Cavev’s passivity is clear from his saying,

I have been thinking, racking my brains; I’ve
got all sorts of remedies, lots of them.

Varya wishes to enter a convent but does not succeed. Her passivity to her love for Lopakhin and Lopakhin’s passivity towards her, leads to their inability to marry. Both repeatedly say that they have no objections about their marriage, but neither of them proposes the other, because Varya is held by social constraints and Lopakhin by his obsession with business.

Mrs. Ranevsky and her family give too much emphasis on appearances. They appear to be a wealthy family living, on their estate, in spite of their approaching destitute. They continue to live like aristocrats, keeping servants, attending parties, and lending money to neighbours. Gayev thinks to get a job in a bank only when he realizes that his situation is in danger. This emphasis on appearance is very important for the aristocracy, but in the changing social environment it was unwise.

In ‘The Cherry Orchard’, choices have their consequences for all characters. Free will is a powerful thing, but Ranevsky family remain passive and allow the auction to happen without any interference. It is Lopakhin, who makes a decision and chooses to buy the orchard though his advice of making small plots of orchard has been rejected by Ranevsky’s. In the same way, Pishchik takes the opportunity to allow mining in his estate and gets benefit from this choice by making enough money to pay off his debtors. Chekhov places much of the blame for the auction of the orchard on those characters who are unable to make choices and take action for their survival.

In this play, the class conflict is best seen in servants. Yasha, Firs’ grandson has different wants and needs from Firs. Yasha wishes to move up in the world, Firs on the other hand, wishes to return to the days before the liberation of serfs. Firs finds himself more comfortable with the old social While Yasha yearns for a new one, where he can act according to his own wishes. Dunyasha, Mrs. Ranevsky’s maid, wish be a stylish lady and to marry a wealthy man. Unlike predecessors, who were victims of servitude, she is free in her planning. Under the influence of this social change Servant class hopes to be rich like Lopakhin. Trofimov tells Anya about the class conflict in Russia,

The aristocracy despite its fall is not ready to treat men like Lopakhin or Trofimov as social equals. Though Lopakhin is now a wealthy man with better financial situation than Ranevsky’s, yet they consider him a vulgar man who has no appreciation for tradition or beauty because he suggests building cottages in a dignified orchard. Lopakhin and Varya are in the middle of this class conflict. Lopakhin was a born serf and Varya’s father was a serf. Varya was an adopted child of Ranevsky; therefore, she is not entirely a part neither aristocracy nor of the servant class.

Theme of Clash between Values of Modernity and Value Russia

A recurrent theme throughout Russian literature is the clash between the values of modernity and the value Russia. Russia had been adopting modernity, its rationalism, secularism and materialism since the early eighteenth century. But much of the late nineteenth-century Russian literature was written in reaction to this change, and in praise of an idealized vision of Russia’s history and folklore. The conflict between Gayev and Ranevsky on one hand and Lopakhin and Trofimov on the other can be seen as disputes between the one.

The play also does have the theme of love. We know that different characters fall in love with one another. Being a widow, Lady Ranevskaya was living in Paris with man whom she seems to be in love. But her relation with him does not turn out to be fruitful. We also know that Lopakhin falls inlove with Varya, adopted daughter of Lady Ranevskaya, but due to the business mentality, the love between them does not end in marriage. Similarly, Yasha and Dunyasha are not brought together by the end of the play. Anya and Trofimov also face same destiny of not having love/marriage: None of the relationship ends with marriage.