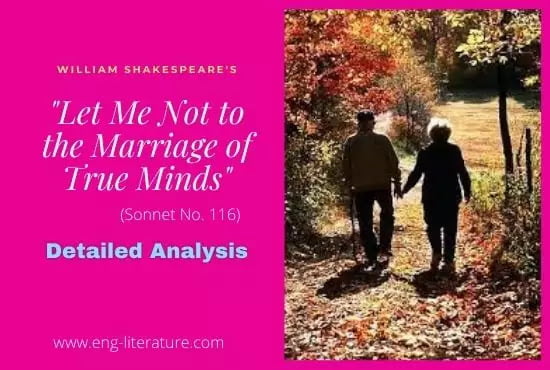 ‘Let Me Not to the Marriage of True Minds” (Sonnet No. 116) is one of the greatest sonnets that Shakespeare ever wrote-

“This, the 116th,” Fowler remarks, “is, on the intellectual side, the climax of the whole splendid series of Shakespeare’s sonnets.”

Wordsworth called it “the best sonnet” that came out of his pen. According to G. B. Evans,

“it is one of the best known and most admired of Shakespeare’s Sonnets – a meditation on the potential ideality and constancy of human love.”

A Marriage of True Minds

Although it is a marriage of minds (of two males) and not of persons or bodies, yet the same sacramental (=of religious service having much spiritual benefit) solemnity that goes with ordinary marriage between a man and women is present here and echoed in the mentioning of words like ‘impediments’ and ‘doom’ in the sense of Doomsday or the Last Judgement). The poet means to state that such marriage of minds should be as permanent, unchangeable and indissoluble.

The whole poem may be looked upon as an attempt to understand what true love is. At the outset the poet stresses that he is not ready to acknowledge ‘impediments’ (obstacles, objections) that stand in the way of the union of true (=loving and faithful) minds’. Then he tries to differentiate true love from what is called sensual or lustful love – love which changes when it discovers ‘alteration’ (physical change such as loss of beauty or youth) in the love-object.

Then, with the help of two images (.e. a lighthouse and a star), the poet reveals the unshakability (i.e. unchangeableness/firmness) quality and inspiring and direction-giving capacity of true love. (Finally he expresses that it does not change with the “hours and weeks’ of Time (which sensual love in all probability does) but rather endures the onslaughts of Time (which in the mean time deprives lovers of their physical beauty) till doom (i.e. death or Doomsday/the Last Judgement).

Thus, true love, according to the poet, does not recognize obstacles spoiling the union of true minds, does not alter or deviate in tune with the love-object’s alteration or preparation for departure, remains firm and unshakable, has the power to inspire or guide and remains steadfast (firm, devoted and loyal) till death or Doomsday.

Everyone knows that the literary beauty of a poem is to a great extent dependent on its imagery. Shakespeare is especially notable for its apt and skillful use of this literary device. His poems become more impressive and more appealing on account of this. Other poets have not attained such high success and uniform excellence in this respect. His images appeal to our intellect, reason and heart. Even an abstract idea takes a concrete shape adorned in exquisite beauty by the deftly use of his images.

In the first quatrain there is an image in ‘remover’ (line 4) which is only suggested but not fully developed. So ‘remover’ may mean Time the reaper who stands with his ‘bending sickle’ to remove the physical charms of the love-object.

The image ‘ever-fixed mark’ (i.e. a lighthouse rooted firmly to the ground) is used to show that love is so deeply trenched in the heart of the lovers that no matter however great dangers and difficulties of life they may have to encounter, love is never uprooted from their heart .

The other is the image of a star (i.e. the North Star or the pole star) that rescues by giving direction to a lost ship in the sea – a star whose astrological ‘worth is unknown although its ‘height’ i.e. position in the sky) can be measured. In the same way love saves lovers from despair melancholy, tension and jealousy and brings them to the right path by giving them inspiration, hope and encouragement

‘Bending sickle’ and ‘rosy lips and cheeks’ that suggest that though love lies beyond Time’s control, the physical charms of the lovers are not so, they being cruelly removed by the reaper’s long scythe.

Other image ‘Time’s fool’ (line 9) raises the picture of an object hopelessly under the control of Time whose sport and mockery it ultimately becomes.

No Similarity of Patterning in the Quatrains

In Sonnet No. 116 the quatrains differ powerfully from one another. In the first quatrain of this sonnet there are too many ‘not’s’ for it to seem to produce the expected positive definition of true love. Love that ‘alters’ or ‘removes’ is not true love that is what the first quatrain states. It is definitely a positive assertion through a negative way. In the second quatrain an attempt is made to reveal the nature of love only in a positive way. In the third quatrain there is a negative statement followed by a positive one. It is clear, then, that instead of a regular similarity we observe a perplexing difference in the patterning of this sonnet’s quatrains.

The theme of this sonnet is based on a structural difference between Time and Love. Time throws “impediments on the way of the union of true (-loving and faithful) minds’. But Love takes no cognizance of them. Time sends tempests to raze, Love to the ground, but Love remains so entrenched that it can never be uprooted from the heart. Time causes ships to lose way in the wide expanse of the sea but Love shows them direction and brings them again to places of safety. Time cuts away ‘rosy lips and cheeks’ (i.e. physical beauty of lovers) with its bending (i.e. curved) sickle, but Love, being mental and noncorporeal, lies outside its ‘compass’ (i.e. range), Time sends ‘hours and weeks’ for Love to change, but Love stands constant (firm and faithful).

Like many authors and thinkers Shakespeare classifies love under two heads: true spiritual love and false physical love. Sensual love to him is ‘not only transitory like a gust of wind but positively injurious like a heady (=quickly intoxicating) wine’ whereas spiritual love is an antidote medicine against a poison) to the physical side of love and a provider of ‘real succor (=help in distress) to miserable humanity blinded with lust, greed and selfishness’.

True love is not an object of mockery to Time nor is it subject to Time’s gradual process of corruption, decay and destruction. It remains beyond the reach of Time’s “bending sickle’. ‘True love,’ as a critic reminds us, ‘is eternal and does not vary with the varying circumstances of the world. True love lives to the doomsday. True love is not immortal itself but immortalizing too.”

Critics like Kerrigan considers that the present sonnet deals with ideal love. Presumably phrases like ‘an ever-fixed mark’, ‘whose worth’s unknown’, and even ‘to the edge of doom’ have led them to hold such a view.

Being a sonnet it deals with a single subject – love’s nature. Unlike a Petrarchan sonnet, it consists of 4 parts – 3 quatrains and 1 final couplet. The rhyme – scheme followed is abab cdcd efef gg. The poem is written in iambic pentameter with occasional variations (e.g. Love al-ters not with his brief hours and weeks) to escape dull mechanical repetitions.