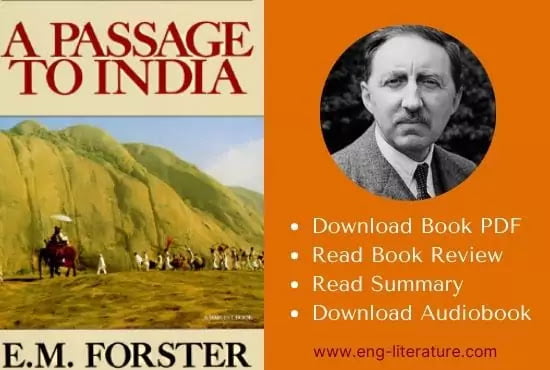 A Passage to India Book Review

A Passage to India (1924) is a novel by E. M. Forster set against the setting of the British Raj and the Indian Independence Movement in the 1920s. It was considered as one of the 100 great works of English literature by the Modern Library and won the 1924 James Tait Black Memorial Prize for fiction. Time magazine included the novel in its “TIME 100 Best English-language Novels from 1923 to 2005”

The story centers around four characters: Dr. Aziz, his British friend Cyril Fielding, Mrs. Moore, and Adela Quested. During a tour to the Marabar Caves (modeled on the Barabar Caves of Bihar), Adela blames Aziz of attempting to assault her. Aziz’s trial, and its run-up and consequences, draw out all the racial tensions and prejudices between indigenous Indians and the British colonists who rule India. In A Passage to India, Forster employs his first-hand knowledge of India.

Foster started writing A Passage to India in 1913 just after his first visit to India. The novel was not revised and completed, however, well until after his second stay in India in 1921 when he served as Secretary to the Maharaja of the Dewas State Senior. Published in 1924, A Passage to India examines the racial misunderstandings and cultural hypocrisy that characterized the complex interactions between Indians and the English toward the end of the British occupation of India.

This book defiantly would be a brilliant choice for those who are keenly interested in Indian history and culture.

A Passage to India Summary

Dr. Aziz had been doubly snubbed that evening. He had been summoned to the Civil Surgeon’s house while he was taking his supper. When he arrived at the Civil Surgeon’s house he found that his superior had gone to the club without bothering to leave any message. In addition, two English-women emerged from the house and departed in his hired tonga, without even thanking him.

The doctor started going back towards the city of Chandrapore on foot. He was tired and he stopped at a mosque to rest. He was furious when he saw an English woman emerge from behind its pillars with her shoes on as he thought. Mrs. Moore, however, had come barefoot to the mosque. Finding her to be decent and friendly, Dr. Aziz engaged with her in conversation. .

Mrs. Moore had newly arrived from England to visit her son, Ronny Heaslop, the City Magistrate. Dr. Aziz found that they had common ground when he learned that she did not care for the Civil surgeon’s wife. Her disclosure prompted him to toll her about the usurpation of his carriage. The Doctor walked back to the club with her. As an Indian, he could not be admitted.

At the club, Adela, Ronny Heaslop’s prospective fiancée declared that she wanted to see the real India, not the India which came to through the rarified atmosphere of the British colony. To please ladies, one of the members offered to hold, what he whimsically termed, a bridge party and to invite some native guests.

The bridge party was a miserable affair. The Indians retreated one side of the lawn and although the conspicuously reluctant of British ladies went over to visit the natives, an awkward prevailed.

There was, however, one promising result of the party. The Principal of the Government College, Mr. Fielding, a man, who apparently felt neither rancour nor arrogance towards the Indians, invited Mrs. Moore and Adela to a tea party at his house. Upon Adela’s act Mr. Fielding also invited Professor Godbole, a teacher at his school, and Dr. Aziz.

At the tea, Dr. Aziz charmed Fielding and the guests with the elegance and fine intensity of his manners. But the gathering broke up on a discordant note when the priggish and suspicious Ronny Heaslop .chastised Fielding for leaving Adela, his fiancée, alone with Aziz and Godbole. :

Adela, irritated by Heaslop’s callous behaviour, informed him that she did not intend marrying him, but before the evening was over she had changed her mind. During the course of a drive in the Indian countryside, a mysterious figure, perhaps that of an animal, loomed out of the dark and nearly upset the car in which they were riding. Their mutual loneliness and a feeling of the unknown drew them together and Adela asked Ronny to disregard her earlier refusal.

The one extraordinary thing about the city of Chandrapore was a phenomenon of nature known as the Marabar Caves located several miles outside the city. Mrs. Moore and Adela accepted the offer of Dr. Aziz to escort them to the caves; but the visit proved catastrophic for all. Entering in one of the caves, Mrs. Moore realized that no matter what was said the walls returned only a prolonged, booming and hollow echo.

Pondering over that echo while she rested, and pondering over the distance that separated her from Dr. Aziz and Adela and from her own children, Mrs. Moore saw that all her Christianity, all her ideals of moral good and bad, in short, all her ideals of life amounted only to what was made of them by the hollow and booming echo of the Marabar Caves.

Adela entered one of the caves alone. A few minutes later she rushed out terrified; saying that she had been nearly attacked in the gloom. Dr. Aziz, the doctor was arrested.

There had always been a clear division between the natives and the British ruling community, but as the trial of Dr. Aziz drew nearer, each group demanded strict loyalty. When Mrs. Moore told her son that she was sure that Dr. Aziz was not capable of the alleged crime he advised her to go back to England. And when Fielding expressed an identical opinion at the club, he was promptly ostracized.

The tension which marked the opening of the trial had a great affect on all concerned. The first sensational incident occurred when one of Dr. Aziz’s friends rushed into the court room and shouted that Ronny Heaslop had smuggled his mother out of the country because she would have testified to the Doctor’s innocence. When restless Indian spectators heard the name of Mrs. Moore, they worked it into a kind of chant as though she had become a deity. The English colony was not to learn, until later, that Mrs. Moore had already died, aboard the ship.

The second incident concluded the trial. It was Adela’s testimony. The effect of the tense atmosphere of the court-room, the reiteration of Mrs. Moore’s name, and the continued presence of a buzzing sound in her ears since the time she left the caves, produced a trance-like effect upon Adela. Under the interrogation of the prosecuting attorney, she recollected the events at the caves. When she reached the moment of her lingering in the cave, she faltered, suddenly changed her mind and withdrew all charges.

After the conclusion of the trial, Chandrapore remained a bedlam for several hours. The Britishers sulked while the Indians excluded. AS for Adela, so far as British India was concerned she had crossed the line. Ronny Heaslop carefully explained that he could no longer associated with her. After accepting Fielding’s hospitality for a weeks, she returned home. In spite of Dr. Aziz’s increased antipathy to the Britishers, Fielding persuaded him not to press Adela for legal damages.

Two years later, Dr. Aziz became the court physician of an aged Hindu potentate who died on the night of the Krishna festival. The feast was a frantic celebration and the whole town was under spell when Fielding arrived on an official visit. Fielding had got married and Dr. Aziz assuming he had married Adela Quested, avoided his old friend. When he ran into him accidentally, however, he was Mrs. Moore’s daughter Stella, whom Fielding had married. The Doctor felt more embarrassed at his mistake.

Before they parted for the last time, Dr. Aziz and Fielding went riding through the jungles. The misunderstanding between them had now been cleared up, but they had no social ground on which to meet Fielding had cast his lot with his countrymen by marrying an English woman. The rocks which suddenly reared up before them, forcing their horses to pass in single file on either side, were symbolic of the different paths they would travel from henceforth. The affection of two men however, sincere, was not sufficient to bridge the vast gap between their races.