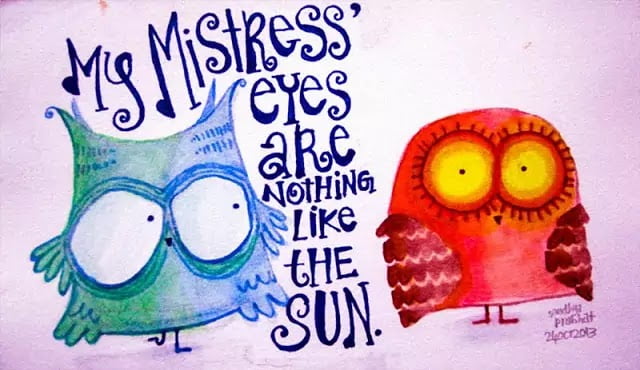 “Things are beautiful if you love them” (Jean Anouilh). In Shakespeare’s Sonnet 130, Shakespeare at first implies that he seeks ideal beauty by insulting his mistress because she doesn’t fit into his vision of an ideal woman. But as the poem progresses, the speaker begins to doubt the idea of ideal beauty and eventually expresses his love for his less-than-ideal mistress while discarding the clichéd concept of ideal beauty. Shakespeare uses language and structure to show that love is a complex thing, not the ideal beauty sought after by most people of the time.

Sonnet 130 is the poet’s pragmatic tribute to his uncommonly mistress, commonly referred to as the dark lady because of her dun complexion. The dark lady, who ultimately betrays the poet, appears in sonnets 127 to 154. Sonnet 130 is clearly a parody of the conventional love sonnet, made popular by Petrarch and, in particular, made popular in England by Sidney’s use of the Petrarchan form in his epic poem Astrophel and Stella.

The majority of the poem gives negative connotations. The sun, red coral, snow, roses, perfumes, music, and a goddess all bring to mind beautiful images, but the speaker’s mistress’ eyes, lips, breasts, cheeks, breath, voice, and walk are all contrasted with the descriptions of loveliness. Her eyes do not shine, her lips are not red, her breasts are not white, her cheeks are pale, her breath stinks, she does not have a pleasant voice, and she does walk gracefully as a goddess would. The speaker seems to be viewing his mistress disdainfully, as if he is not attracted to her, and after reading the first twelve lines, a sense of indignation and perhaps sorrow for this woman who is so ugly that not even her lover describes her as being pretty is felt (141). The images serve to make the sonnet come to life because the readers can “see” the comparisons through the use of descriptive words.

The speaker announces that he loves her, independent from the ideals of beauty men had. In this line we find the height of his comparison in nature and meaning: the “heaven” (l. 13). His love is higher than anything he was comparing her with previously. For the speaker she is much worth and he loves her more than anybody who “belied” (l. 14) her with “false compare” (l. 14). This last line is an attack on men who think a woman is only an object to look on, not a person to look into. The value of a woman is dependent on the thing you compare her with. Even if the mistress does not accord with the typical comparisons men used in the speaker’s times, she still can be beautiful in his eyes. Either because of her pretty visual nature, which he just needs to compare with different precious things, or because of her wonderful inner values, which we cannot see immediately but have to find out.

William Shakespeare’s poem is a sonnet with fourteen lines, typically for a Shakespearean sonnet it is divided in three quatrains and one couplet in the end. The rhyme scheme in the quatrains is a cross rhyme (abab cdcd efef) and the last two lines are a rhyming couplet (gg). William Shakespeare uses an iambic pentameter throughout the poem. Its formal regularity makes this sonnet look like a representative love poem for the time William Shakespeare lived, but having a scrutiny on the words and their meanings it becomes clear that this sonnet is totally different.

In conclusion, Shakespeare in Sonnet 130 uses language and structure to convey the complex nature of love. Shakespeare wrote this poem although it was unusual for a man to see a woman as a multidimensional character. Women were supposed to delight men with a lovely face and body. But to fall in love with a woman because she was smart or intellectual was totally untypical.